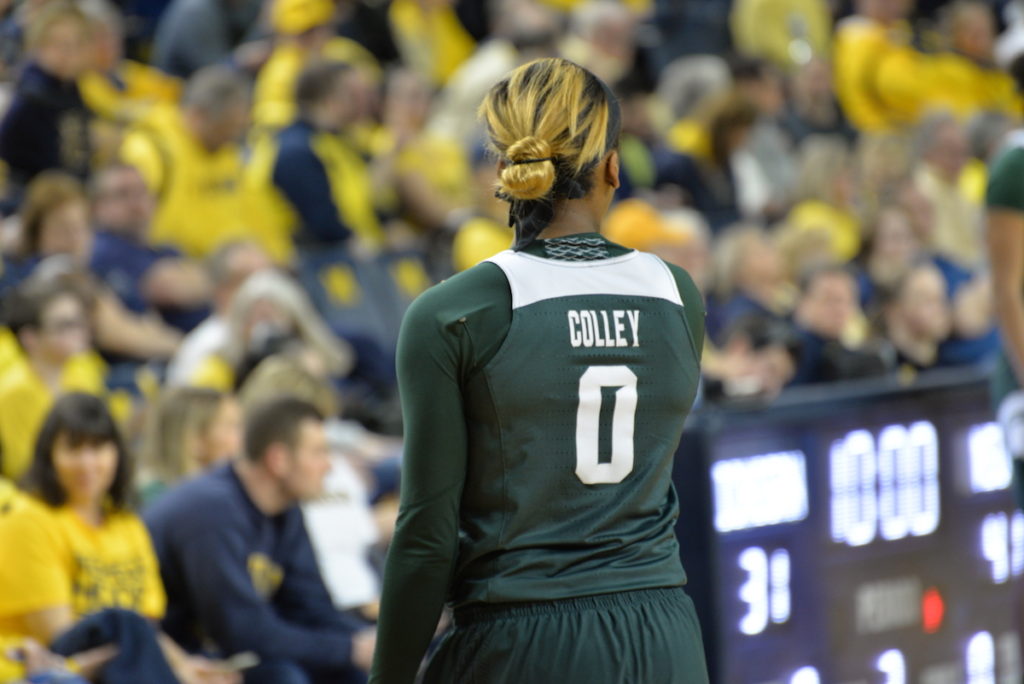 EAST LANSING, Mich – The No. 24 Spartans got sweet revenge against the Indiana Hoosiers in a 77-61 victory Monday night, a matchup that was crucial for both teams going into the Big Ten tournament.

Coming into the game, the Spartans sat at fourth in the Big Ten with a conference record of 6-5, while the Hoosiers were in eighth place with a record of 6-6 in the conference. Regardless of Michigan State being just above .500 in Big Ten play, this game was the difference between staying at a double bye and dropping all the way to eighth place in the Big Ten.

Indiana had won three straight games against Michigan State, but the Spartans were undefeated at home and increased their record to a perfect 13-0 at the Breslin. This game saw a 30+ point scorer in Shay Colley as she dropped 32 in route to a victory. The last 30+ scoring Spartan? Coincidentally it was Colley putting up 31 against South Dakota last March.

What did Michigan State do to win? Shooting 77.3 percent from the line certainly helps. Having a stud player like Colley score nearly half your points is also a game changer. The same guard struggled to get things going in the last game against Indiana but has been hot since then, scoring in the double digits every game since the loss in Bloomington.

“I felt normal but coach told us at half to attack the basket more,” Colley said. “We were settling for a lot of jump shots and it just paid off.”

A game that started off neck and neck soon emerged into a lopsided victory. The Spartans walked into the locker room with a 33-30 lead and left the court with a 16-point margin of victory.  The first time these two teams met in January resulted in a 68-64 Indiana victory with big contributions from Brenna Wise, Jaelynn Penn and Ali Patberg. While Michigan State did have four scorers in double digits in the previous game, they also allowed Indiana to shoot from the line 18 times and get 14 points as a result.

Today would tell a different story as Patberg, one of the leading scorers in the previous matchup between the two teams with 12 points, five assists and four rebounds, suffered a shoulder injury in the teams last competition against Minnesota. The next man up mentality would look to Penn and Wise to make the plays this game, but the Hoosiers had a new plan.

While Penn still had a good game, the Spartan defense made sure to shut down Wise. As a result of this, a new Hoosier had a chance at a big game. Grace Berger, the freshman guard, started her second game of the season and got off to a hot start scoring 10 points and grabbing three boards while shooting 60 percent from the floor, all in the first quarter. Berger made the game close for Indiana, but didn’t score a single point after the first quarter. Her final stat line was 10 points, four assists and four rebounds while shooting 37.5 percent from the field.

Suzy Merchant switched the matchup to shut down Berger which ultimately proved to be quite effective.

“Well I switched the matchup,” Merchant said. “That was clearly part of it and they did that last time.”

Something to look out for: senior center Jenna Allen is just six points away from reaching the 1000 mark. Doing so would make her the 27th Spartan to score 1000 points. She will look to accomplish the feat this Thursday at Wisconsin as the Spartans take on the Badgers.