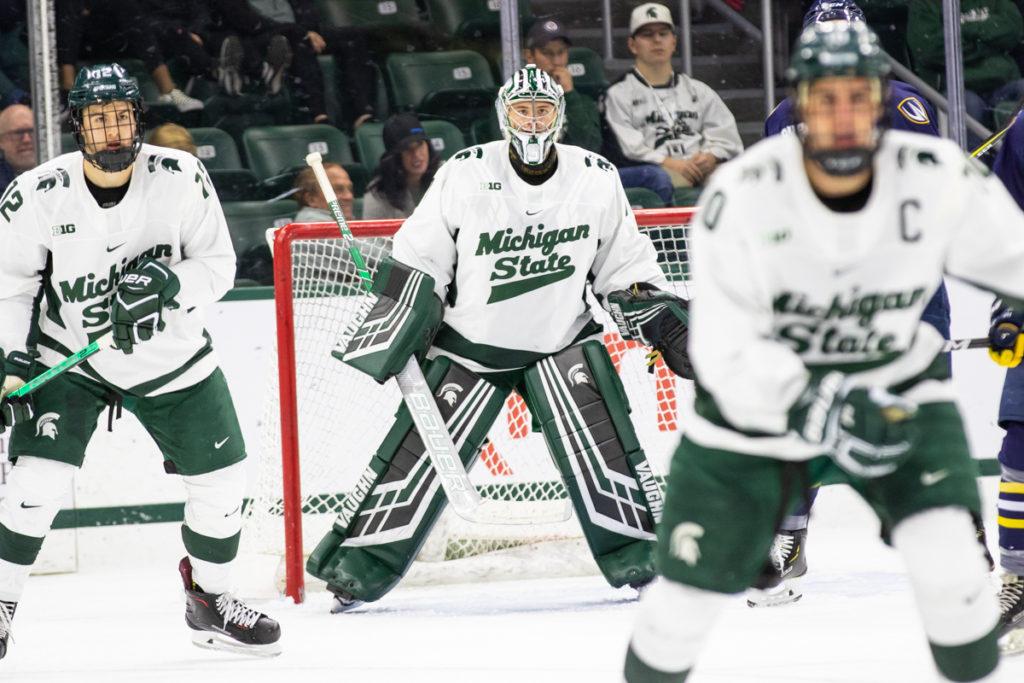 It’s not often when Michigan State scores three goals in a game and none of them come from the KHL line. Despite the strong performance of some unusual suspects, an offensive explosion from Michigan, combined with lackadaisical Spartan defense, created a mountain that was just too big for the green and white to climb.

This was one of those games that truly was a mixed bag of positive takeaways and less than ideal trends. Austin Kamer, a sparingly-used right wing capitalized on his opportunity to shine by scoring his first goal of the year. The sophomore from Grand Rapids came into this game without a point on the season, but was able to find the back of the net in the third period at the 15:50 mark.

Sam Saliba and Wojciech Stachowiak also scored for the Spartans, but their contributions were overshadowed by poor defense throughout the entire game for Michigan State.

The second period was about as sloppy a defensive quarter that you can have in one segment of a hockey game. An inability to locate the puck, a lack of urgency and an overall half-hearted effort during the majority of the first and second quarters led to a 4-1 Michigan lead at the end of two.

“Obviously on the defensive side, we want our guys to be better,” head coach Danton Cole said. “We wanted to straighten things out.”

For those who attended the game, there was a general feeling that the Spartans were lucky to be tied after one period when Michigan held an 11-6 shots on goal advantage and was able to spend the majority of the period deep in the MSU zone.

According to Sam Saliba, MSU was quite encouraged to be tied after one, especially after the way the Wolverines controlled the tempo of the game, however this enthusiasm did not transfer into that crucial second period.

“We felt we were in a good spot. We didn’t think we had our best first period and to be 1-1 we realized were we were at. We Just came out flat in that second.”

Looking purely at the statline of five goals on 31 shots, it may appear that freshman goaltender Drew DeRidder had just an average night, but to everyone in attendance, it was clear that he was the reason MSU had a fighting chance in the third period. Most of the goals allowed were from point blank range due to miscommunication on the defensive side. DeRidder had several monumental saves that kept the Spartans within a couple goals until things came unraveled late in the second.

“This one is not on Drew,” said Saliba. “You can only ask your goalie to make so many saves in a big game like that.’’

This was the fourth meeting overall between these two in-state rivals this year, but unlike all four previous games, one team controlled the vast majority of the game. This was the first game against Michigan for the Spartans this season in which they lost by more than one goal.

MSU had won two games coming into the contest earlier in the year against the Wolverines, and had tied in the other game 2-2. Keeping this in mind, the abysmal defensive effort was unexpected to say the least.

One must be encouraged however by the fact that all three goals were not scored by the star studded line of Taro Hirose, Patrick Khodorenko and Mitchell Lewandowski. So often this year, this trio has carried the rest of the team in some hard fought wins. Hirose, Khodorenko and Lewandowski all have over thirty points on the year.

The next leading point getter for the Spartans is Dennis Cesana with 20 points. Friday MSU had scoring contributions from three players who coming into the night have combined for a grand total of eleven points on the season. If MSU can receive more balanced production from the second and third lines, they will be much deeper as a team.

The Spartans have a quick turnaround, as they play these same Wolverines at 7 p.m. in Detroit at Little Caesars Arena in the annual ‘Duel in the D’ game. If these previous four meetings are any indication of how tomorrow night may go, fireworks will be aplenty in a chippy and hotly contested game. The last time these two rivals took the ice at Little Caesars Arena was at the end of 2018, a wild brawl ensued, which resulted in a heated 2-2 tie.

With the Wolverines now holding a three point advantage over MSU, this next game is that much more important.

“Where we are at in the season and the way the standings are, every game has that feeling,” Cole said.

Talking about something and executing it are two different things. Will Michigan State be able to exact revenge on the Wolverines for tonight’s drubbing or will Michigan once again rule the day? We shall see.