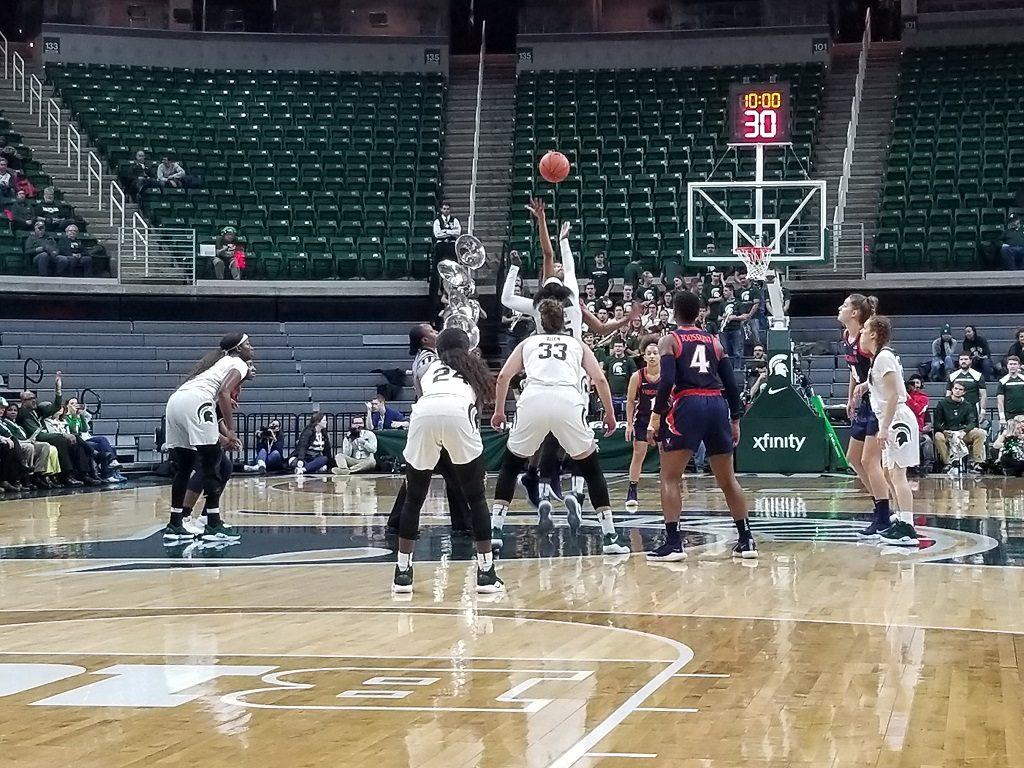 HARTFORD, Conn. – In Michigan State’s first game since upsetting Oregon at the Breslin Center, the Spartans traveled to Connecticut and beat the Hartford Hawks 74-66 in overtime.

MSU had a little break from game action during finals, and returned to the court playing their first game as a ranked team since November 2016. The Hawks came in at 5-5, going 4-0 at home in the Chase Family Arena.

MSU was tested by the Hawks in Sunday’s matchup. Hartford’s defense posed problems for the Spartans, who were able to overcome the Hawks defense. The Hawks played in the American East Conference Championship last season and are a good team with good players  coach Suzy Merchant said.

“It was just like walking into a little bit of a trap, trap game as they say,” Merchant said.

During the first quarter the Spartans used their size advantage over the Hawks to jump out to a quick 15-10 lead. Sidney Cooks came off the bench for MSU and scored six quick points in the paint. The Spartans began the second quarter on a 8-0 run to bring the score to 23-10, capping it off with an open 3-pointer by Cooks.

The Hawks brought a 13 point deficit down to a 7 point deficit by the end of the second quarter and the Spartans led 32-25 at the half. Cooks led all scorers with 11 points off the bench. Jenna Allen, coming off a big week earning Big Ten Player of the Week and ESPNW and USBWA National Player of the Week, had just two points through the first two quarters. She contributed other ways though, leading the team with five rebounds and five assists.

Jade Young led the way for the Hawks in the first half, scoring nine points. Hartford used a half court and full court press, along with strong defense to force 11 MSU turnovers. The Spartans did not shoot a free throw in the first two quarters.

Michigan State averaged 14 turnovers per game, and through the first three and a half quarters, they had already turned the ball over 15 times.

Coming out of the half, the Hawks stormed back to draw within one point, 44-43. They were led by Lindsey Abed who scored seven points in the third alone. The Spartans scored the last five points to regain a small lead, 49-43. The Hawks outscored MSU 18-17 in the third quarter. Cooks scored 6 more in the quarter to help the Spartans gain some separation. Taryn McCutcheon also scored five in the quarter.

Hartford’s defense held the Spartans to 39 percent shooting from the field in the third. MSU continued to dominate in the paint, outscoring the Hawks 28-16 through the first three quarters.

Jenna Allen was held scoreless through the second and third quarters. She got her third and fourth point in the fourth quarter. She came into the game averaging 16.3 points per game.

The Hawks continued to push in the fourth, staying right with the Spartans. With 1:39 left in the game, Young forced an MSU foul and made two free throws to pull within two. Hartford continued to pressure and tied the game at 57 after a Young steal and an Abed layup.

“When they went with those five guards, it was hard for us to defend at times,” Merchant said.

A Tory Ozment offensive rebound and putback on the other end put the Spartans up by two with 27 seconds to go. Those were her first two points in the game.

Sierra DaCosta tied the game up at 59 with 12 seconds left. Ozment missed a 3-pointer in the Spartans last possession and time expired sending the game into overtime. This was the first overtime game this season for either team.

Hartford took its first lead of the game with 2:30 left in overtime, with a 3-pointer by Kelly Douglass putting the Hawks up 64-63. The Spartans answered by scoring the next nine points going up 72-64. The Spartans maintained a sound lead for the rest of the game.

For MSU, Sidney Cooks led all scorers with a career high 19 points on 8-13 shooting. Victoria Gaines scored 16 points on 8-14 shooting to go along with her 11 rebounds. Taryn McCutcheon was the only other Spartan in double figures, scoring 14 including a crucial 3-pointer in overtime to extend Michigan State’s lead.

“I thought Syd did a really good job of just finishing shots and that’s what she does she is a good shot maker and at 6-foot-4, 6-foot-5 she can do it a lot of different ways,” Merchant said. “I don’t think we did a great job all the time of getting our bigs the ball, we went away from that a little bit. But when we went back to it, it was really powerful for us down the stretch.”

The Hawks also had three players in double figures. Jade Young led the team with 18, then Lindsey Abed with 16 and Sierra DaCosta with 11.

It was a low scoring game for the Spartans, who came in averaging around 86 points per game. Michigan State needed overtime to reach 74, twelve points less than their average. The Hawks defense held the Spartans to 43 percent shooting, while also forcing 19 turnovers.

“I think you’re only as good as your next one,” Merchant said. “We just beat Oregon and struggled with the next one so you can’t, nothing in this business is guaranteed.”

“There was a lot our kids needed to experience,” Merchant said. “I’m glad we won the game, but I’m glad we were in a situation where they had to make plays, and free throws and defensive stops down the stretch so that’s real and that is what you’re going to see in the Big Ten.”