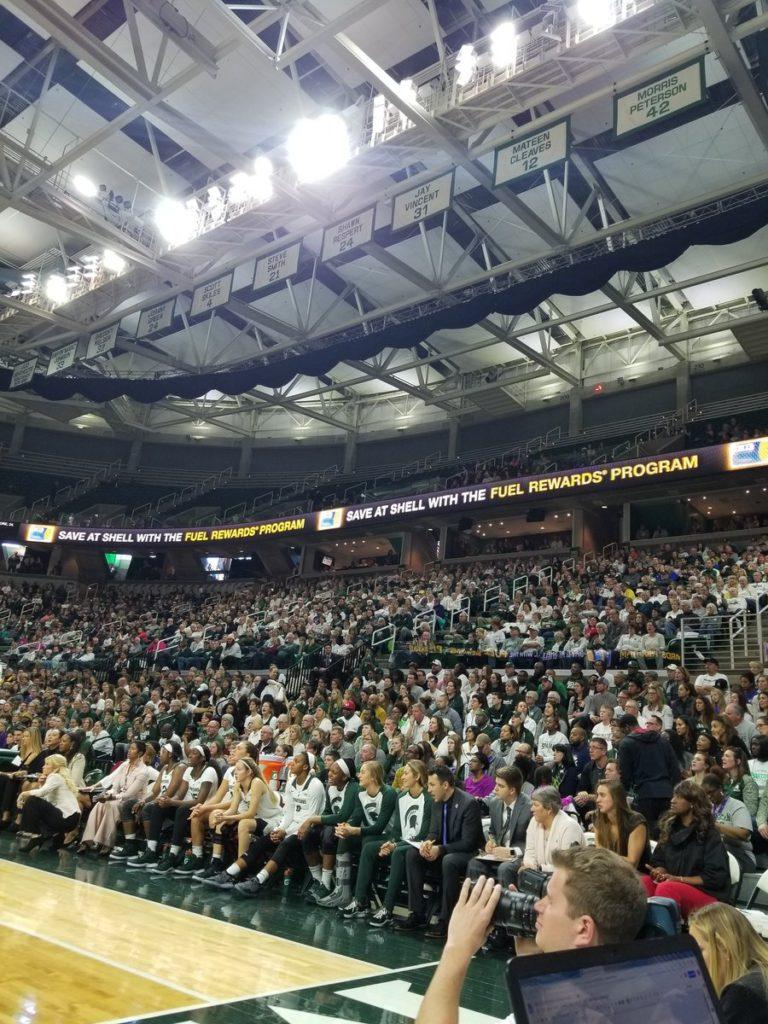 “The sport here at Michigan State is really appreciated,” said MSU coach Suzy Merchant. “You work that hard, don’t you want people to care and appreciate what your craft is?”

The Spartans 1-2 punch of Jenna Allen and Nia Clouden battled with an Iowa team that has all five starters averaging double-digit points, with Iowa center Megan Gustafson averaging 26.5 points per game.

As Clouden and Gustafson went back and forth scoring in a huge third quarter. It was evident that the true freshman Clouden was no stranger to the big moment as she nailed a corner three to give the Spartans a 45-43 lead with 8:02 to play in the third.

“Yeah I think I handled it very well, I try not get too excited and mess up,” said Clouden. “I just try to attack the defense every chance I get and get people in foul trouble.”

Like most teams around this time of year, the Spartans got off to a slow start in the game. Going down early 15-4 with just under six minutes in the first quarter, forcing Merchant to gather her team with a timeout.

“In that huddle I just talked about defending that kid [Gustafson] better, I thought we were really soft the way we approached her, and jump shot happy,” said Merchant. “So, I just said listen, we got to start playing inside out and downhill.”

Senior Jenna Allen, as she has so often this season, followed the timeout with back-to-back scores. The starting center rang off 10 points in the final 5:46 of the first quarter, leading MSU back to tie the game at 19-19 late in the first.

The crowd got going as well, as the upper deck was opened for the first time this season with a packed house in East Lansing.

Iowa refused to be done as their leading scorer Gustafson tore up the Spartan defense to the tune of 21 points in the first half and 30 in the game to go with her 10 rebounds.

“We didn’t do that great of a job, she was getting too deep in the post,” said Merchant. “One-on-one she’s very hard to stop. So, if you start sending people, those other guys can shoot threes.”

The fourth quarter began with Iowa trailing by seven points after MSU used a huge third to outscore the Hawkeyes 23-10 and take the lead permanently.

Freshman Tory Ozment, who has played her way into a big part of the Spartan rotation was noticeably absent from the game and was on the bench in a walking boot. But star guard Shay Colley returned from a lower leg injury that occurred during the Kennesaw State game.

“That one shocked me, I got call saying she’s going to be out a couple of weeks.” Said Merchant when asked about Ozments injury that was said to be a stress fracture.

The Spartans eighth straight win since falling to N.C. State in Cancun is the team’s most in a row since 2012-13 and ended non-conference play with 10-1 record.

The Michigan State Spartans are now 11-1 this season and play next in the new year at Northwestern in a second straight conference game. That game can be found on BTN+ and is scheduled to tip off at 8:00 p.m. on Jan. 3. Iowa is now 9-3 this year overall and plays next against Nebraska at home on Jan. 3 at 8:00 p.m.