Spartan freshmen the difference in home win over Virginia 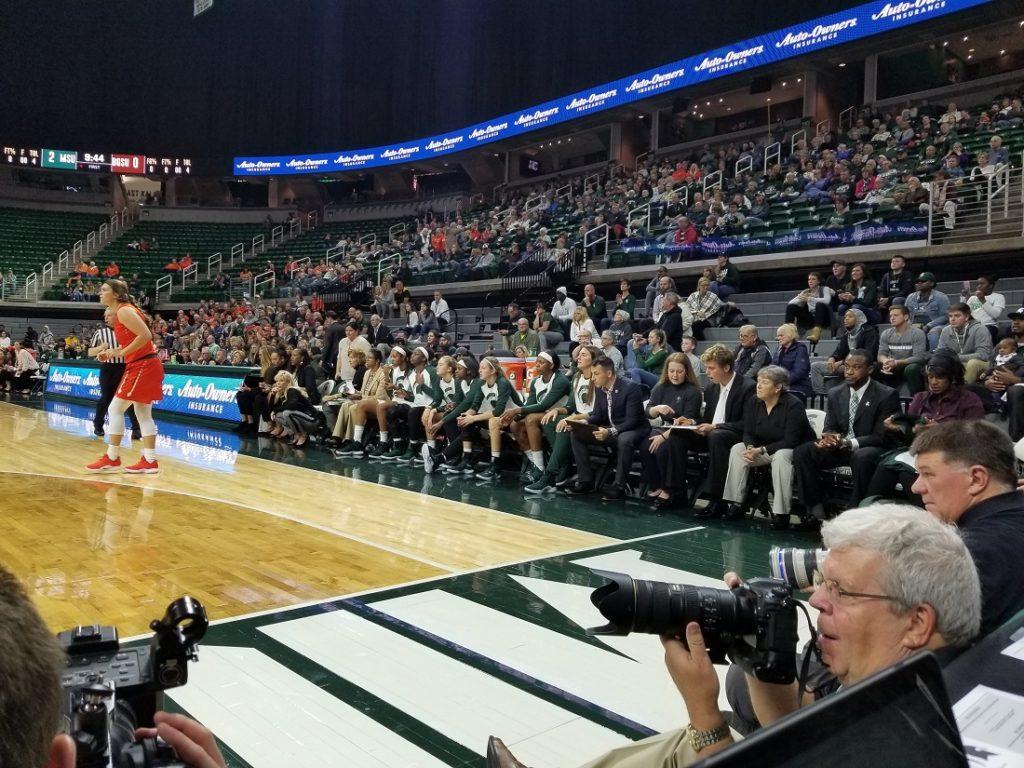 EAST LANSING, Mich — After spending a week in the sunny Cancun weather, Michigan State returned to the Breslin center in dominating fashion, rattling Virginia in the yearly ACC/Big Ten Challenge 91-66. The Spartans (5-1) were facing a struggling Cavaliers team (2-4) after a loss to No. 15 NC State and a win to unranked Kennesaw State in the Cancun Challenge. The Spartans looked to return to their winning ways against Virginia, and a big part of that was the new freshmen Michigan State has to work with.

Allen led by example, posting 13 points, 6 rebounds, an assist and a steal in the first half. After averaging just over 12 minutes a game, freshman Tory Ozment played nearly 10 and a half minutes in the first half of the game alone, putting up 6 points and making all four of her free throws. The Spartans would walk into the locker room at the half with a comfortable 46-26 lead.

“I never know when my jersey’s going to get called,” Ozment said. “It was an opportunity to prove myself.”

The fourth quarter would present a player Michigan State hasn’t seen much of this year, Kayla Belles. The freshman had only played in one game entering today’s contest, and she very quietly began to surge in the fourth quarter. By the end of the game, she had put up 12 points and 7 rebounds in just over 12 minutes of play time. Belles has struggled with knee injuries in the past year and to come back in such dramatic fashion was big for the freshman’s confidence.

“It was definitely energizing,” Belles said. “I feel like I’ve lost a part of myself that I had in high school….and this whole past year I’ve been trying to work to get that back.”

With Shay Colley, Sidney Cooks and Claire Hendrickson sidelined with injuries for a period of time, having Belles step up was big. MSU head coach Suzy Merchant was excited about what Belles brought to the table.

“She plays really hard, she can catch the ball, she can block shots, she can rebound, she keeps it simple.”

Virginia might have struggled, but their top two scorers had excellent games. Brianna Tinsley put on 19 points while shooting 50 percent, while Jocelyn Willoughby put up 16 points while grabbing 11 boards.

The freshman trio was responsible for 41 of the team’s 91 points and shot a combined 61 percent on the night. After having an injury-plagued season last year, having Colley, Cooks and Hendrickson out week to week does not make things better for this team.

If those freshmen can continually play like they did tonight, it could solve a lot of Michigan State’s potential problems before Big Ten play starts. Michigan State will return to action Sunday against Texas Southern, tipoff is set for 2 p.m.