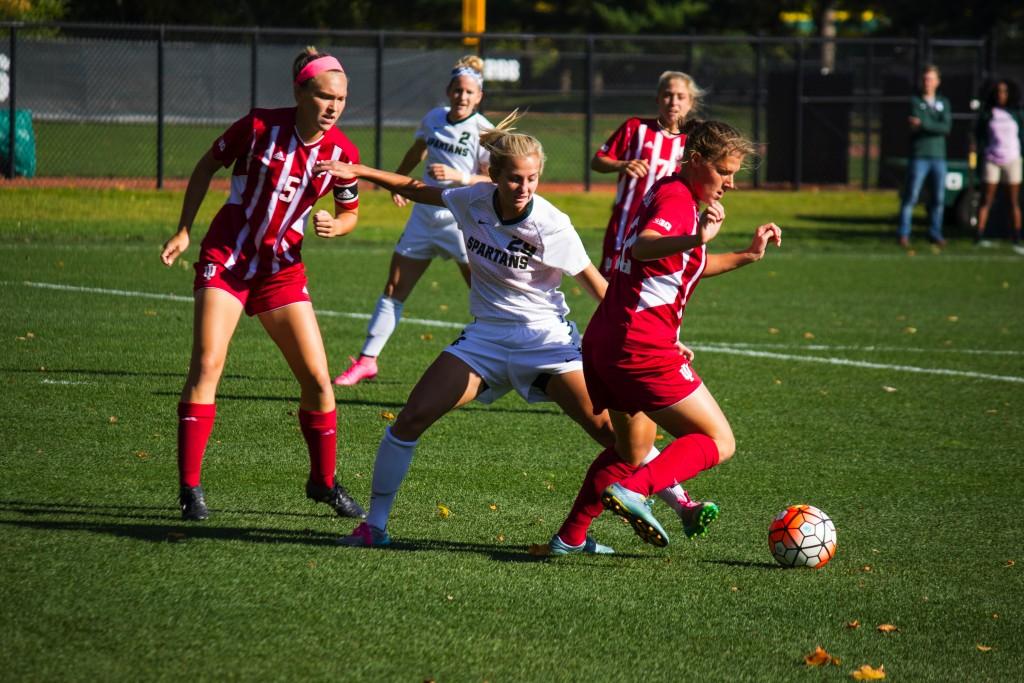 EAST LANSING, Mich. — Senior Night is a time to remember the seniors who play their final home game. In Thursday’s case, seniors Lexi Warner, Brenna Cockerill and Sabrina Marx were recognized for their dedication to the MSU women’s soccer team for the past three years.

Thursday ended on a sad note though, as No. 23 Rutgers (10-2-5, 6-1-3 Big Ten) won the game 1-0 on a golden goal in overtime. While a loss is not the ideal way to end any home portion of the season, there are bits and pieces the Spartans (5-8-3, 0-7-2 Big Ten) can take away from this game.
First Half
The offense began with an attack strategy, moving the ball forward to create scoring opportunities. However, that did not result in much success. In the first half, the Spartans only had one shot attempt by Sadie Misiewicz. In the final five minutes of the first half, Camryn Evans had the ball right near Rutgers’ goal and passed it into the box, but no one there.

The Spartans struggled in the first half with creating opportunities on the offensive side. A portion of passes became easy turnovers for the Scarlet Knights. Furthermore, the offensive players were scattered throughout Rutgers’ territory and could not coordinate passes as well as the Knights. Thus, the Knights easily stole the ball and went through to Spartan territory.

“I think our defense did a good job,” MSU coach Tom Saxton said. “We talked a lot about holding the line at the 18 and I think they did that for the most part.”

The Spartan defense succeeded in keeping Rutgers from lighting the scoreboard up with goals. In the first half alone, Rutgers had eight shots at goal. The defense kept Rutgers at bay, but the Knights’ offense still powered through the Spartans’ defense. Goalkeeper Reilley Ott had six saves against the Knights.

Without the strong defense present in the first half, the game would have been an easy win for the Knights without having to put as much effort in the second half. The defense forced both teams to play aggressively and attack the offense more often.
Second Half
The second half started off on a better note, as the Spartans executed better passing and put more pressure on the Knights’ offense. Ball possession for the Spartans changed from defensive territory to a more balanced possession on both ends of the field.

“We just made it clear as in the moment of transition after we win the ball from defense that we need to connect the next pass and when we did the opportunities presented themselves, especially in the wide channels,” said Saxton.

Looking back at the first half, the Spartans’ struggles with passing and ball possession were evident given that they were in their own half of the field for most of the first half. In the beginning of the second half, there was an evident change in gameplay. More control was enforced upon the ball, which allowed the Spartans to move forward.

In the 53rd minute,the Spartans appeared to break open the scoring, but it was not counted due to a late offsides call on Brittany Tanner. The unfortunate call slipped the score back to 0-0 and left the game for anyone to win. The Spartans created more opportunities for scoring more goals. Gia Wahlberg had a few attempts at goal along with Camryn Evans and Alexandra Thomas. While shot creation was successful, the chances to finish the shot did not fall into place.

Players on both teams often collided with each other, aggressively playing for the ball. In most cases, there were no major injuries or reviews. However, a yellow card was given to Madison Pogarch of Rutgers for a hard tackle.

Ott was a key player this game as during both halves, there were multiple attempts from the Knights on goal. Some attempts were from far off while other ones were right in front of her. Rutgers continued challenging the defense as they controlled ball movement and moved through the defense to create opportunities.

With one minute left, Ott led with a kick, but Rutgers returned the ball for a shot and missed. A final attempt for the Spartans failed as regular time ended. The Spartans headed into overtime on Senior Night.
Overtime
During overtime, Rutgers had more opportunities to score. The Spartans prevented many of these attempts from becoming game winners. On the offensive end, the Spartans couldn’t convert many of their passes into shot attempts. Danielle Stephan was given a free kick after she was fouled in the last 10 seconds of the first overtime. In the final seconds, Stephan took a shot but it went over the post.

The second overtime period was similar to the first. Ott prevented more goals, Rutgers had more opportunities and Michigan State continued to communicate in ball rotation and defense. Stephan had another close opportunity where she looked to cross the ball for an assist. However, Rutgers keeper Meagan McClelland swiped the ball before an assist could be made.

In the final minutes of the game, Michigan State had another opportunity to score but missed. The game looked to end in another draw, but Rutgers made an attack that won them the game.

Forward Nicole Whiteley received a pass and made her way through the defense to the penalty box. While the Spartan defense tried to keep her away from the box, it wasn’t enough as she got close to the goal and took a shot in the far post. Although Ott saved many other shots before, a diving attempt was not enough for her to keep the ball out of the goal. That goal ended the game and stunned Michigan State on Senior Night.
What to Learn
Looking past the loss, it’s evident that there were some lessons learned throughout the game. One thing for sure is that there are a lot of younger players with experience who will return for next year. While the overall record of the season is a downside, the valuable lessons and experiences taken here will benefit the team. A returning MSU women’s soccer team with an experienced goalkeeper, forwards and defenders will make a huge impact at the beginning of the next season.

The second half saw more opportunities for the Spartans with possession of the ball on both sides of the field. Consistency was present as the Spartans put forward communication and rotation while dealing with attacking Knights’ players.

“Like I said, it’s our drive to want. We want to win,” said Evans. “Some of it is frustration cause we haven’t won. But some of it is just the desire to win. It adds to our culture as a team.”

As the game continued scoreless in regular time, both teams became aggressive in their efforts to get at least one goal. For the Spartans, it’s frustrating as they haven’t won a game against a Big Ten opponent. The aggressiveness continued as players on both teams collided when going for the ball.

“I definitely think we were better in terms of creating opportunities,” Evans said. “We definitely adjusted a lot from the first half. Our offense is a lot cleaner, our passes were a lot cleaner. We were crossing and we just didn’t get to the goal in time.”

The Spartans crossed the ball much better in the second half. Tanner and Wahlberg had close crosses that could’ve made their way towards the goal, but were stopped short by either McClelland, Rutgers’ defense, or empty spots where players should’ve been to create more opportunities.

This was a heavy loss for the Spartans. Of course, it was on Senior Night, but there were multiple opportunities for the Spartans to win, including the goal that was called for offsides on the Spartans. Nevertheless, this team can take a lot from this game and put it forward for Sunday’s rivalry matchup at Michigan, scheduled to begin at 2 p.m. in Ann Arbor.