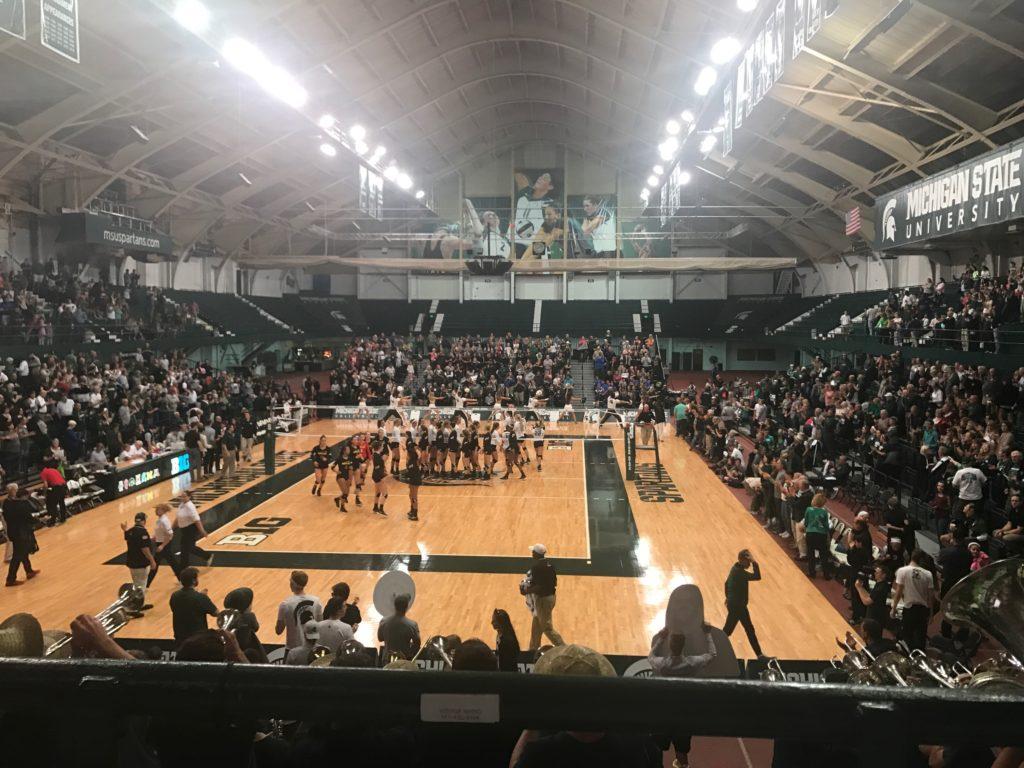 EAST LANSING, Mich.–The Michigan State Spartans hosted its first Big Ten home game this season Friday night, welcoming the No. 9 Penn State Nittany Lions into the Jenison Field House. The Spartans had a tough start in their first two conference matches last weekend, losing at Iowa and No. 3 Nebraska. Continuing on a downhill path, the Spartans fell to Penn State in three sets: 25-11, 25-16, 26-24.

Although the Spartans were back on their turf, they played very timidly. The Nittany Lions came out and played with few errors and pure aggressiveness, while MSU struggled with serve receive. The Spartans dug themselves into a hole at 12-4. Penn State hitter Jonni Parker had four kills and the team averaged .391 in attacks. That offense was too much for Michigan State, who hit at .045 for the first set. The Spartans were outplayed and lost the first set 25-11.

“A big part for us was serve receive tonight,” said Spartan libero Jamye Cox. “We didn’t pass anywhere near where we wanted to tonight, and that’s partially because we do these seams. We did not communicate at all between each other and just went back to our safe zone of ‘okay we want the person next to us to take that’ and that made us all a step late to the ball. That made us react late so communication was a huge part that we didn’t have tonight.”

The second set started the same as the first: Penn State played harder. Spartans fell behind 4-0 due to the Nittany Lions’ hustle. MSU hitter Maddie Haggerty recovered from her serve receive errors and used her strategic ball placement to collect several points for the Spartans. Penn State had a concrete the entire set. A group of Penn State fans got louder as the set came to a close, and the Nittany Lions won 25-16.

“Volleyball is definitely a game about serve and pass,” Haggerty said. “First contact always, and they were coming at us aggressively with their serves, and we didn’t handle it as well as we should’ve. The better team won tonight and they were way more aggressive on serving line than we were and it showed.”

Hitting at .375 for the second set, Penn State was unstoppable. The Nittany Lions put up great defense of four blocks and 10 digs. The Spartans failed to beat them in any category. Their .032 hitting percentage was a critical factor in their second set defeat. MSU had 10 hitting errors in the second set alone, while Penn State controlled its mistakes to only three.

“I think that right away… … a little predictable early.”“I feel like we were ready to come out,” George said. “I think that right away both game one and two, we went down several points and it kind of took us awhile to start getting back into our rhythm. They serve very well. We struggled a little bit and we weren’t getting our offense flowing. We were being a little predictable early.”

Maybe the Nittany Lions were tired. Maybe the Spartans were fed up with losing. Whatever it was, Penn State was no longer untouchable in the third set. The Spartans held their first lead of the entire match at 11-10 in the set. Spartans hitter Alyssa Chronowski got the team more energized with her intense celebration and flailing arms. Middle hitter Naya Gros put up a big block to keep the Spartans in the lead at 12-10.

“We’re not gonna stop fighting and we’re gonna battle back in the Big Ten,” Chronowski said. “We played free in the last game. That’s what Michigan State has to offer, but we can’t offer it the third set cause like Jesse was saying ‘we took too many punches and then we were just beating ourselves up.’ If we battled in the first two sets, give them our best Michigan State volleyball, I think it would’ve looked different, but the third set can’t be where it starts.”

Haggerty kept up the intensity and played with determination. Spartan libero Jamye Cox tied the game at 20-20 with a floating serve for an ace. After going back and forth with the lead, Penn State’s ruthless offense sealed the set at 26-24.

“We try to grow every time we lose,” Haggerty said. “It’s a learning situation. We’ve got a lot of young girls on this team. We’ll watch some film on us, but we’re not going to do all of it cause we know that we’re better than what we showed tonight. Just kind of shake it off and get ready for Rutgers tomorrow and start tomorrow a new day.”

The Spartans stay home another day and take on Rutgers Saturday at 7 p.m.

“It’s like a reset,” George said. “We’ve gotta get back and know what we need to do in order to get out there and play really well against Rutgers and we’ve gotta get a faster start. We’ve got to get more aggressive immediately in order to and play the game that we know how to play.”