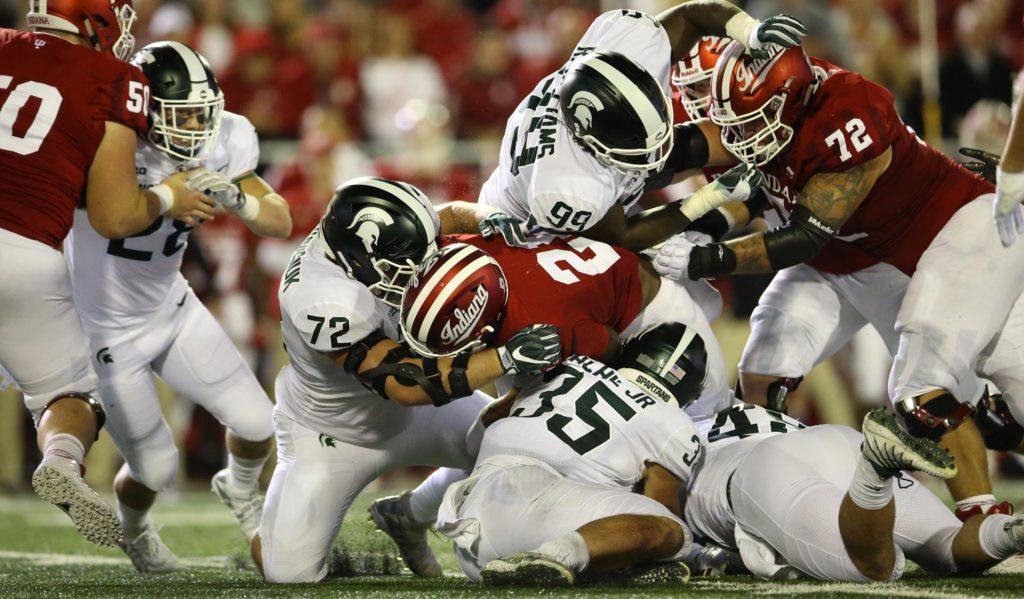 After opening up Big Ten play with a win last weekend in Indiana, No. 21 Michigan State (2-1, 1-0 B1G) returns to Spartan Stadium for a two-game homestand, hosting Central Michigan (1-3, 0-1 MAC) on Saturday.

“CMU this week, comes in, it’s always been a big game for us, rivalry-game type thing,” MSU head coach Mark Dantonio said. “Going all the way back, there’s been some great games. Right now they are a 1-3 football team. I don’t think that’s indicative of who they are.”

Saturday’s contest marks the 11th all-time meeting between MSU and CMU, and you have to go all the way back to 2009 to find the last time the Chippewas went into Spartan Stadium and came away with a win. Dan LeFevour threw for 328 yards, Antonio Brown had 71 yards and Butch Jones was at the helm of the program when the Chips pulled the 29-27 upset over the Spartans.

CMU opened up its season with a competitive loss to a solid Kentucky team in Lexington. They then got routed by Kansas in its home-opener before losing its MAC opener at Northern Illinois two weeks ago. The Chippewas notched their first win of the season last weekend after a 17-5 win over Maine.

The good news for the Spartans is that this CMU team doesn’t possess anywhere near the offensive firepower that Jones’ squad had. The Chippewas enter Saturday’s meeting second-to-last in the MAC in both total offense (259 yards) and scoring offense (15 points per game).

With Michigan transfer Shane Morris graduating, who threw for over 3,200 yards and 27 touchdowns in 2017, it was Lansing Catholic alum Tony Poljan tabbed as the preseason starter. After two games, junior Tommy Lazzaro has taken the reigns as the starter moving forward.

“His decision-making ability and his ability to improvise with his feet,” Central Michigan head coach John Bonamego said of what Lazzaro brings to the table. “He’s an aggressive decision maker which is a good trait for a quarterback.”

Junior tailback Jonathan Ward returns as the starter after a breakout campaign in 2017. Racking up 1,019 yards and 10 touchdowns last year, Ward was named a second-team All-MAC player. Now, with a big year under his belt, he’s the conference’s top returning rusher after finishing third in the MAC a year ago.

“I just remember from the game, No. 5 [Ward], preparing for him, he was a lot better in person,” MSU defensive ends coach Chuck Bullough said. “So I’m telling players on film he’s really good, but he’s really good when we ended up in the game.”

Despite its standout running back, CMU doesn’t boast the best ground attack. The Chips rush the ball for just 120 yards per contest, which is 10th in the MAC. Facing the Spartans’ rush defense, which ranks first nationally, establishing the rushing game won’t be easy.

“You’re hoping somewhere along the schedule you’re gonna get a break, but you don’t know how good teams are gonna be two or three years out,” Bonamego said of MSU’s defense. “This will definitely be a huge challenge, that’s for certain.”

In his fourth year as defensive coordinator in Mount Pleasant, Greg Colby has produced one of the nation’s most productive passing defenses. The Chippewa secondary is exceptional, ranking fifth nationally in passing yards allowed per game (140).

Redshirt freshman safety Devonni Reed anchors a secondary which is very opportunistic, already with five interceptions, which ranks 19th in the FBS. The Detroit native has been impactful very early in his college career, with 24 solo tackles, which ranks 18th in the nation, including a team-high 14 tackles in CMU’s 35-20 season-opening loss to Kentucky.

The front seven of the Chippewas is formidable, with senior Malik Fountain the glue guy. Fountain has stuffed the stat sheet this year with a team-high 47 tackles, 26 solo tackles, 2.5 tackles for loss, a sack and an interception. The Chips are solid on both ends, with an experienced duo with senior Mitch Stanitzek and junior Mike Danna, who’s a budding star coming off a four-sack performance last weekend against Maine.

With the struggles the Chippewas have in their passing game, they need to get Ward going on the ground. That’ll be easier said than done if the Spartan run defense is as advertised. This is a young CMU team, and on paper the Spartans will have the edge, but based on how they’ve looked in its first three games, MSU isn’t in the business of overlooking any opponent.

A win Saturday would give the Spartans a chance to build on their first impressive result of 2018 before returning to the meat of their Big Ten slate.

Kickoff for Saturday’s game is set for noon and will be televised on FS1.