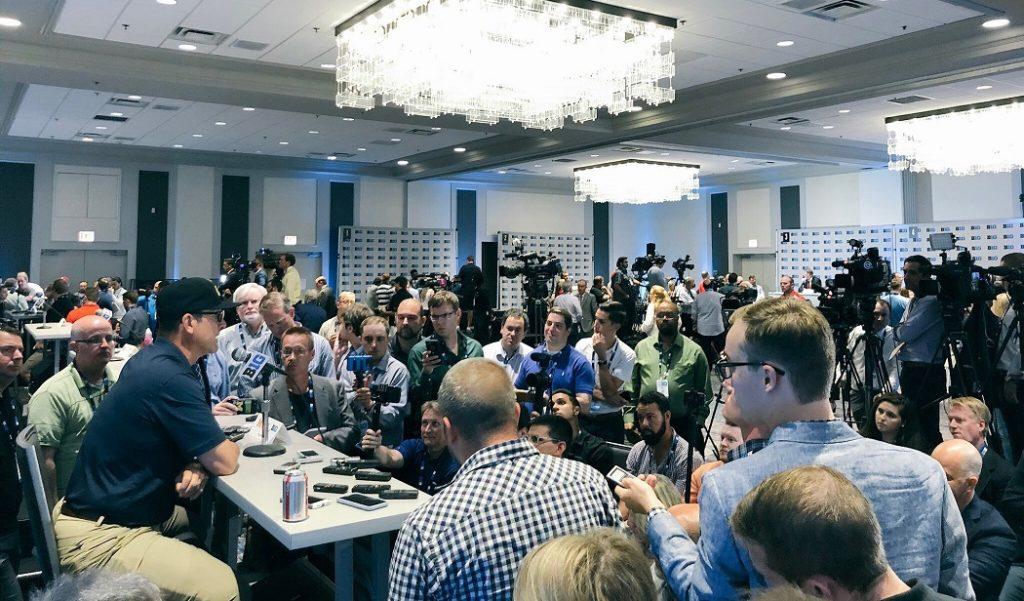 CHICAGO- After seeing a significant drop off in 2017, Jim Harbaugh made his way to Chicago for the 47th annual Big Ten Media Days facing a flurry of offseason questions about his team heading into his fourth, and quite possibly the most pivotal season in his college coaching career.

Harbaugh strolled into the Chicago Marriott Downtown Magnificent Mile, khakis and all, the only coach of the day not suited up, and delivered the least-surprising Harbaugh media availability potentially ever.

After being on the cusp of the College Football Playoff in 2016, Harbaugh’s win total dropped by two in 2017, finishing the year 8-5, with an underwhelming 26-19 Outback Bowl loss to South Carolina.

Much of last season’s offensive woes had to do with offensive line play. In hopes of jumpstarting that unit, Ed Warriner was brought on this past offseason to do just that.

“Well, Ed has done a tremendous job,” Harbaugh said of his new offensive line coach. “He’s really brought a lot of enthusiasm, wealth of knowledge, tremendous experience with coaching in the Big Ten, and just a good dude.”

Offensive line play had much to do with the spotty production at the quarterback position. The Wolverines had a revolving door at that position, and while Ole Miss transfer Shea Patterson is the presumed starter, Harbaugh was tight-lipped on the quarterback situation heading into fall camp.

“Quarterbacks position, don’t have any announcements to make today about that.”

While Patterson on paper seems to be the guy on paper, Harbaugh pumped the brakes on penciling in his transfer as the starter come Sept. 1. Harbaugh also spoke the praises of his other quarterbacks: Brandon Peters, Dylan McCaffrey and Joe Milton.

“Brandon Peters was also improved this spring,” Harbaugh said. “Dylan McCaffrey probably made the most improvement of any quarterback. And on our roster Joe Milton came in and was a mid-year, so participated in spring practices as well and did very well. I think he’s got a very bright future.”

While the CFP format was a big topic of conversation amongst coaches today, Harbaugh didn’t stray away from offering his opinion on the current model.

The Wolverines return the bulk of their starters on both sides of the ball, and should boast a top-five defense nationally yet again under Don Brown. If this team gets significant improvement at the quarterback position (which it could), this should be a team that contends for the Big Ten East in 2018. With their season opener in South Bend, the schedule isn’t forgiving, but if the Wolverines can get increased production, considering where their defense is, this should be Harbaugh’s best shot at an elusive Big Ten title.