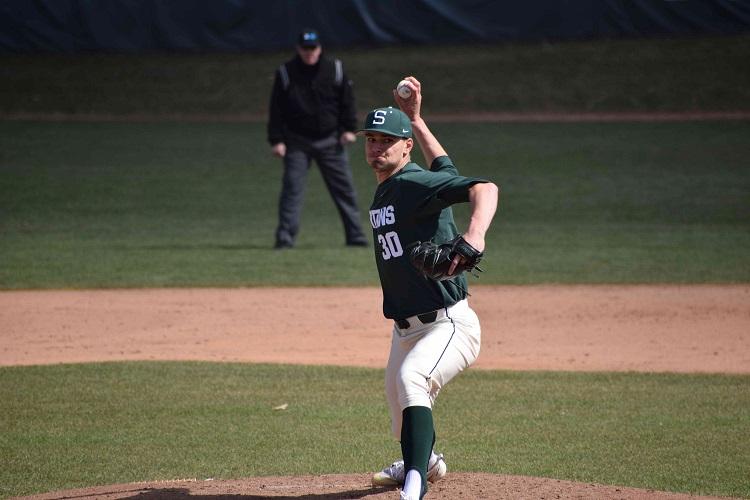 We’re midway through the 2018 college baseball season, which means it’s time to review, rank and grade performances. There’s always time and room to improve, and maybe even earn some postseason extra credit. Until then, here’s what the report looks like thus far.

McCauley was the only sure thing coming into the season for the MSU pitching staff. He finished his sophomore season posting 49 strikeouts in only 25 ⅔ innings and tallied nine saves over 25 appearances. There’s depth, no doubt, but roles weren’t clearly defined. Now halfway through the 2018 campaign, he’s mustered up two wins; one against Niagara and the most recent against Nebraska.

McCauley started the season strong, with a 12-strikeout performance against Fresno State. It seemed to be the old McCauley the Spartan faithful are used to seeing. However, now seven starts into the season, McCauley has surrendered at least five runs in four of those starts.

The longer outings and Friday competition seemed to be getting to the junior, but even in his latest appearance against the Cornhuskers, he gave up three walks and three hits in two innings out of the bullpen. Even in a reduced role with more rest, he’s still struggling to keep runners off.

With the Spartans now 3-5 in conference, they’re fighting for a spot in the B1G tournament. McCauley needs to find his old self if they want a trip to Omaha (for the conference tournament, that is).

Don’t let the record fool you. Landon has pitched well over eight starts. His first win came against Nebraska on April 8, but he’s had a few stellar outings. In his first start of the season in Fresno, Landon threw a 6-hit, 2-run game over 6 ⅔ with nine strikeouts. He ended up with the loss, as the offense only scored one run. His best outing came against Michigan on Mar. 24, where he gave up two runs, four hits in eight innings including nine strikeouts.

You get the hint. He’s pitched well, but with limited run support. He ranks fourth in the conference in innings pitched and fifth in strikeouts. He’s pitching well but hasn’t had results to show for his efforts. If the senior continues to pitch the in a similar fashion, and the offense gives him some support, he’ll be someone coach Jake Boss Jr. can lean on heading into the final months of the season.

Erla has been a surprise. Coming off an arm injury sustained playing football, he has emerged as MSU’s top pitcher. Other than a beating in Ann Arbor against the Wolverines, Erla doesn’t have many blemishes. In three of his eight starts, he’s posted scoreless outings – two of those equaling seven innings. Against Illinois and Arizona, who are two of the best teams on MSU’s schedule, Erla allowed one run and two runs, respectively. His durability post-injury has been impressive; his highest pitch count came against Illinois, totaling 115 pitches.

He ranks among conference leaders in ERA, wins and strikeouts looking.

Erla will be the most important piece heading into the meat of their Big Ten schedule. MSU has winnable games approaching against Northwestern, Maryland and Penn State. If Erla continues to dazzle, the Spartans are in good position to climb the standings.

The lefty has been a workhorse in his own right. He’s appeared twelve times out of the bullpen and started once against Clemson. He’s tossed 23 ⅔  innings and struck out 28. Opponents have scored nine times off Tyranski, but only three of those have been earned.

Tyranski started against Clemson in Greenville, S.C. A game that seemed to be all MSU turned bad quickly, but he did his job, only giving up a hit in 3 ⅔ innings. He’s had two appearances totaling four innings or more – in those, he combined for no runs and four hits.

Tyranski is four appearances off the conference-leading 17, owned by Ohio State’s Kyle Michalik. In a bullpen that hasn’t performed particularly well, Tyranski has been one of the few bright spots.

Flying under the radar, Mokma has impressed, despite a recent skid. He began the season allowing two runs in 13 ⅓ innings over seven outings from the bullpen. Struggles set in during a start against Niagara. He made it through four innings, allowing two runs and a walk. A week later, he recorded one out against Michigan, but not before they knocked him for four runs and a walk. In an extended outing against Rutgers, he gave up a pair of runs in 3 ⅔ innings.

Mokma and Tyranski were go-to pieces out of the ‘pen early, but struggles haven’t rewarded Mokma many chances lately. He earns a B- because of his performance early in the year, but needs to find the rhythm he had before returning to East Lansing. If the mid-Michigan area can attract warm weather in the last half of the season, look for the Mokma-Tyranski two-headed monster to reappear.

MSU begins the second half of their schedule on Tuesday against Notre Dame in East Lansing. First pitch is scheduled for 3:02 EST, and the game will be televised by ESPNU.