Cole: Don’t expect Bucknell to bow down to Spartans 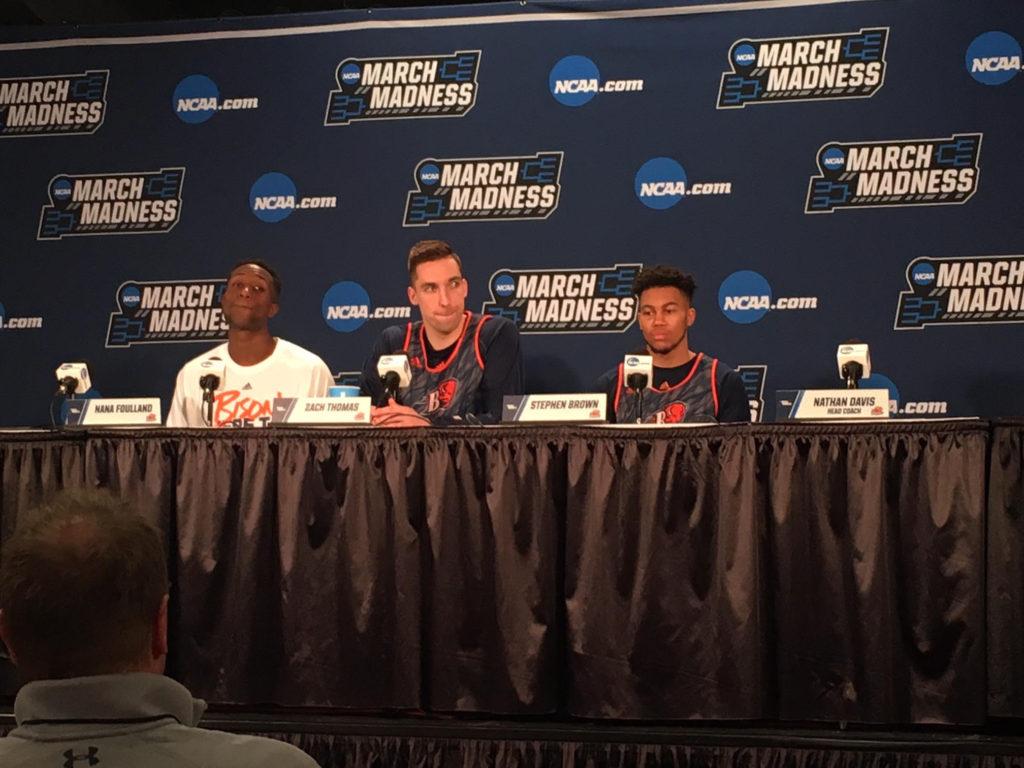 DETROIT – One team comes in with only four losses all year, having been ranked in the top 10 from start to finish for only the second time in program history, and features two potential lottery picks in the 2018 NBA Draft.

The other? Winners of eight straight and league champions by a whopping four games, powered by an experienced front line of three seniors that each score over 15 points per game.

Looking at those descriptions, you wouldn’t think the NCAA seeds would be that far off for the two. But that’s the way it goes for No. 3 seed Michigan State ahead of Friday’s first round matchup in the NCAA tournament against No. 14 seed Bucknell.

The Bison (25-9 overall, 16-2 Patriot League) did, in fact, win their league by four games. They followed that up with a fiery run through the league tournament, where they recorded the largest victory ever in a Patriot League championship game.

For the Spartans (29-4 overall, 16-2 Big Ten), a team being slotted as a favorite for the national championship, the matchup is certainly not one to look past when preparing for a tournament run.

“I looked at Bucknell, and I kind of shake my head that they’re a 14 seed. And I mean that. You’ve got three seniors that can all put the ball in the hole,” MSU coach Tom Izzo said. “They have experience. They have some depth. They have some speed.”

Those three seniors—Zach Thomas, Nana Foulland and Stephen Brown—have been the backbone of the Bucknell program for a while. Bison head coach Nathan Davis credited the trio for being “absolutely selfless” when asked about what makes them special.

Led by Thomas, who paced the Patriot League with 20.3 points per game and 9.2 rebounds per game, the Bison are not afraid to establish their own style of play against a highly-rated opponent.
[su_pullquote align=”right”]“I looked at Bucknell, and I kind of shake my head that they’re a 14 seed. And I mean that.”
–Tom Izzo[/su_pullquote]
“We’re not going to try to slow them down,” Davis said. “We’re going to try to play the way we play because that’s when we’re at our best.”

Thomas, a 6-foot-7 stretch forward, will likely pick up Jaren Jackson Jr. on defense. When asked about the impending matchup with a potential lottery pick, Thomas admitted it was “going to be a tough matchup.”

But he was quick to remind those in the press room that he wasn’t ready to back down just yet.

“I think I’m a matchup problem as well for him,” the Patriot League Player of the Year said.

Still, the Bison are not naïve to the fact they’re going up against one of the nation’s most successful teams this season. The Spartans stayed in the top 10 from start to finish after beginning as the preseason No. 2 team.

But the Big Ten conference title was not looked upon strongly by the selection committee, due to the conference’s perceived weakness. Only four Big Ten teams made the NCAA tournament, as bubble teams Nebraska and Penn State were left on the outside looking in on Selection Sunday.

The Spartans’ resume suffered, as they only amounted wins against two tournament teams—North Carolina and Purdue. The 29-4 record was not powerful enough to move the Spartans above a 3 seed, but the Bison believe their opponent deserved better.

“Yeah, we shake our heads when they’re a 3 seed,” Thomas said, chuckling upon hearing Tom Izzo’s similar comments about his team.

The Spartans and Bison tip off at 7:10 p.m. ET from Little Caesars Arena in Detroit. The game can be seen on CBS.