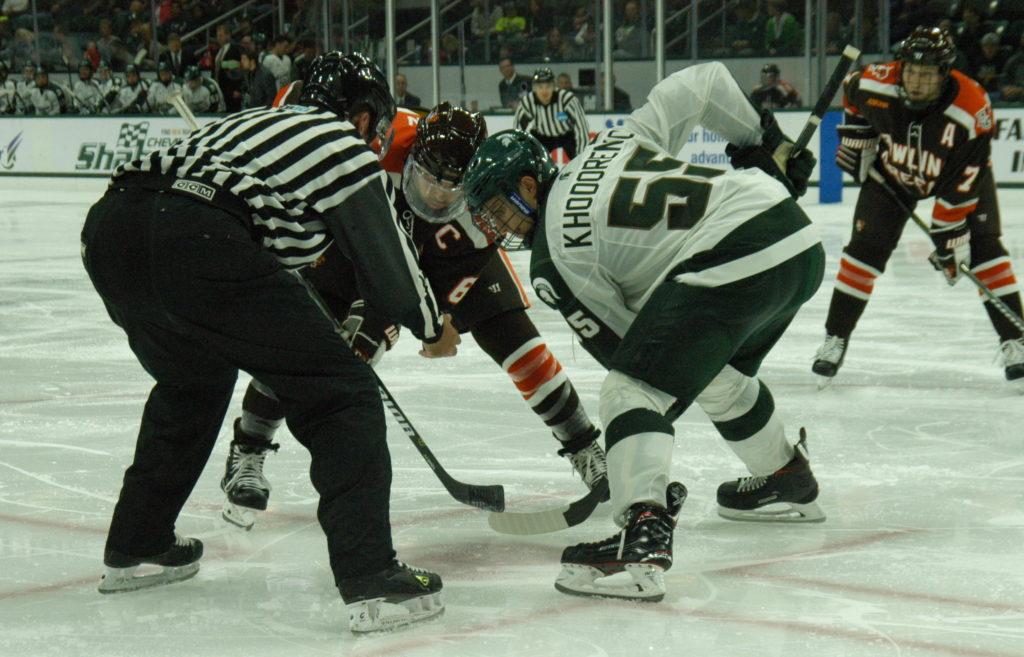 EAST LANSING, MI — It’s been a long time coming for freshman Mitch Lewandowski. He was held scoreless for his last five games. He made a big return on Friday night as his two goals lifted Michigan State (11-18-2) over No. 16 Penn State (13-13-5) 4-2 at Munn Ice Arena.

It actually was not Lewandowski that got the scoring started for MSU, instead it was another Spartan freshman. Just over two minutes into the game Brody Stevens came streaking down the right hand side and sent a low, hard shot on the ice that beat Nittany Lion goaltender Peyton Jones five-hole. Stevens’ first ever collegiate tally was certainly one Jones would want to have back and it seemed to suck the life right out of the Nittany Lions who are known for their fast starts this season.

While Penn State would draw even off a quick strike by Nate Sucese, who collected the puck off a ricocheted of the boards and shot it into a wide open net, it would be the Spartans would would retake the momentum.

The skill and awareness of the KHL Line was on full display as sophomore Taro Hirose sent a pass low below the goaline for fellow sophomore Patrick Khodorenko to retrieve. Once Khodorenko possesed the puck behind the net, he backhanded a pass right to Lewandowski who went upstairs on a confused Peyton Jones.

The Spartans finished the first period up 2-1 and outshooting Penn State 14-7. The Nittany Lions came out strong in the second period, taking advantage of two power plays to pour shot after shot on Spartan netminder John Lethemon. The MSU penalty killers held firm though and the Spartans were soon rewarded with a power play of their own late in the period.

After a great play by Hirose to keep the puck in the offensive zone at the blue line, he sent a quick pass to Khodorenko near the slot on a mini two-on-one with Lewandowski. Showing off great skill and patience, Khodorenko was able to out-wait a sliding Penn State defenseman and made a no-look backhand pass to Lewandowski who scored a highlight-reel-quality goal into the top-shelf past Jones.

Penn State coach Guy Gadowski elected to use his timeout to challenge the play, arguing that it was offsides. However the goal was upheld after video review.

Michigan State took their 3-1 lead into the locker room, just 20 minutes away from their fourth Big Ten win. They certainly had recent history on their side as MSU is currently undefeated when leading after two periods.

Things started to get heated in the third period as both teams were looking for the next goal to either put the game away or pull within striking distance.

Penn State was able to find that goal on a power play with the goaltender pulled at the 16:58 mark of the third period. However, Hirose was able to seal the win for the Spartans with an empty net goal with 1:30 left to play.

With his two goal night, his fifth such game this season, Lewandowski now has 30 points in his first year in East Lansing. He is the first Spartan to accomplish that feat since Derek Grant had 30 points in his freshman campaign during the 2009-10 season.

The win also improves MSU to an 11-18-2 overall record and a 5-14-2-1 Big Ten record. Both marks are improvements on last year which saw the Spartans win just three Big Ten contests and just seven games overall.

Michigan State will finish off their regular season home schedule against Penn State on Saturday. Face-off is set for 5 p.m.