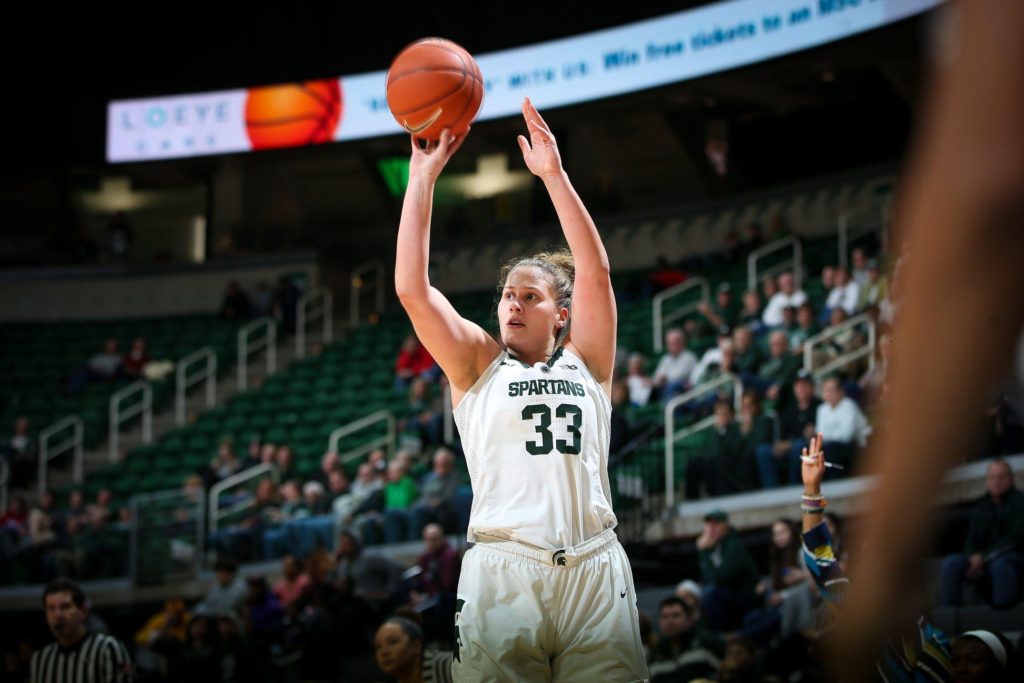 Michigan State women’s basketball has had its regular season finally come to a close. The Spartans recently finished their last regular season game, falling to Minnesota 81-63 on the road, the conference tournament now awaits.

It has been a season full of memorable moments, and some not so memorable. Nevertheless, this team as a whole had a respectable season, despite faltering in the last month. There were offensive and defensive players that truly stood out above the rest, some great new additions to the team and of course an MVP.

Since coming back from injury, Colley has put up not just some of her best efforts offensively, but some of the best Michigan State has seen all year. She scored 28 points in her second game back after the injury, and a career-high 32 points while shooting (12-18) from the field later against Indiana.

She has also been one of Michigan State’s best and most consistent free throw shooters, reaching just above 80 percent from the charity stripe. A player that had high expectations coming into the season certainly lived up to them, I think Shay Colley more than deserves this award.
Defensive player of the year
She is usually the shortest player on the court at any given time, but Taryn McCutcheon is a very strong defender. Her on-ball defense, especially since she gives up a lot of height, is some of the best I have seen. She moves her feet very well and is exceptionally quick.

McCutcheon can guard point guards taller than her and put a lot of pressure on the ball at any time on the court. She will pick up players full court to keep the pressure on, along with being a great defender without the ball. If the ball is in the air, McCutcheon probably knows where it is going. McCutcheon leads the team with 56 steals on the season, 22 more than Colley and Nia Clouden, who both have 34.

In 28 games, McCutcheon is averaging 2.0 steals per game, which puts her at fourth in the conference in steals per game. Kenisha Bell of Minnesota is the only player in the conference with more total steals than McCutcheon with 57. That is only one more. For McCutcheon’s tenacity on and off the ball, she is given the defensive player award.
Rookie of the year
Had Tory Ozment not gotten injured in the early part of the season and missed many games, I think this award would have been up for debate given her production in her first few games. However, Nia Clouden rightfully earned this honor, being the best freshman on the team and in the conference.

From the beginning, coach Suzy Merchant was excited about Clouden. She often talked about Clouden’s ability to drive the ball, much like Russell Westbrook of the Oklahoma City Thunder. Clouden has started every game this season alongside Allen and McCutcheon. She was a consistent force for this Spartan team from start to finish. As the season progressed, Clouden gained more and more responsibility as the team’s main point guard, running the show, again for emphasis, as a freshman.

Her total stat line right now stands at 11.9 points per game, 4.0 assists per game and 3.6 rebounds per game. This is while shooting 45.5 percent from the field and logging the second most minutes played, behind McCutcheon. McCutcheon was also the only one who dished out more assists on the team, and Allen and Colley are the only two to outscore her.

She managed to finish in the top 25 in the conference in scoring, top 10 in free throw percentage and top 15 in assists. There are many reasons why Nia Clouden is easily this year’s rookie of the year.
MVP
Jenna Allen was the only senior on the team this season, and while she did struggle at times in conference play, she more than deserves to be this year’s MVP. Allen was less than 10 points away from being the 27th player in Michigan State women’s basketball history to reach 1,000 points for a few games, eventually getting there after some rather ugly performances.

Allen dropped 27 points that game, her season high, on 11-of-14 shooting while grabbing seven rebounds. Her performance that game was inspiring. She went on to receive two Big Ten Player of the Week awards, including the week the Spartans took down the Ducks. In Michigan State’s home game against Iowa, Allen was able to compete with, and partially slow down one of the best players in the nation right now in Megan Gustafson.

Despite struggling as of late, Allen still is second on the team in scoring with 12.6 points per game while shooting 49.5 percent from the field and 39 percent from beyond the arc. She also leads the team in rebounding, averaging 6.9 rebounds per game. Allen is a product of what it means to be a Spartan, her hard work and dedication has brought her to where she is now. Her memorable final season in the green and white rightfully earned her the award of most valuable player.