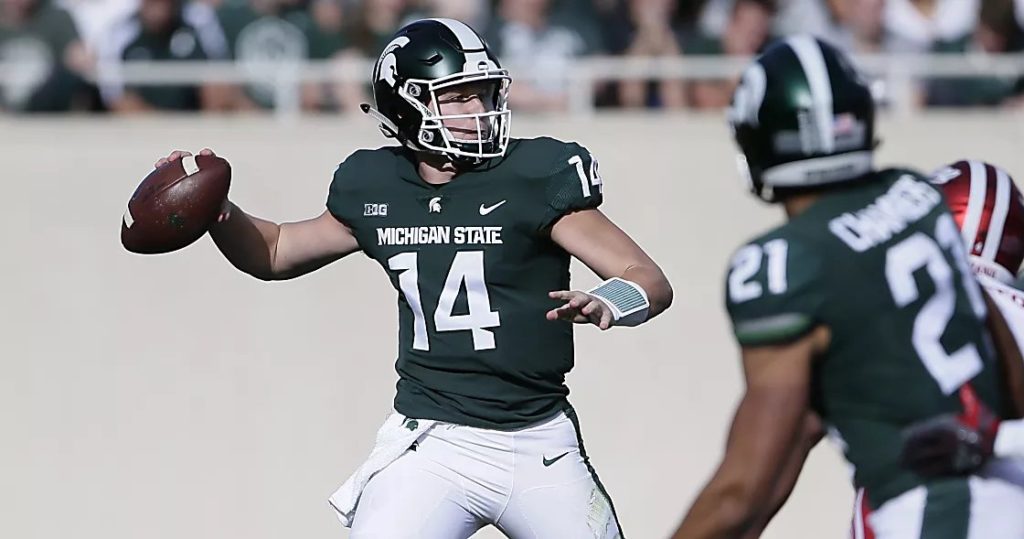 EAST LANSING, Mich — In a game that featured lowly offensive showings from both Indiana and Michigan State, the Spartans (6-1, 4-0 B1G) squeezed out a 17-9 win against the Hoosiers (3-4, 0-4 B1G), taking the Old Brass Spittoon trophy back to East Lansing.

“Great effort by our football team today,” head coach Mark Dantonio said. “We found a way to win and I thought we played hard, and with a lot of grit.”

Coming off a breakout game running the ball last weekend, MSU mustered just 60 yards on the ground in the first half, with the ground game faring not much better in the second half with just 29 yards. 18 of those 29 yards, though, came from an LJ Scott touchdown scamper late in the fourth quarter. Dantonio issued a statement Friday that Scott, who was arrested Wednesday for a driving infraction, would play againt IU, but that his status would be affected by it.

“Young people are going to make mistakes,” Dantonio said. “These young people are like my family, but I didn’t think it was a tough decision to make playing LJ today.”

Neither team was able to muster much offense in the first half with just 234 total yards, and they went into the half deadlocked at three. Quarterback Brian Lewerke was poor in the half, going just 6-for-10 for 60 yards at halftime. Darrell Stewart led the Spartans with 23 yards on just two catches at the break. The teams’ miseries on offense resulted in eleven total punts in the first half, five from MSU’s Jake Hartbarger and six from IU’s Haydon Whitehead.

“I thought Jake had some outstanding punts today,” Dantonio said. “We kept No. 5 [Harris] pinned back there in their territory and our coverage team was great all game.”

“Indiana is a very good team and they’re very well coached,” Dantonio said. “They have a very changed defense and I thought they tackled well and got up to the line quickly.”

After the Hoosiers added to their lead with a 20-yard Oakes field goal, MSU responded with arguably their best drive of the day. The Spartans drove the ball 55 yards on just seven plays, before Brian Lewerke connected with Felton Davis from 10 yards out to give the Spartans their first lead of the game, 10-9 late in the fourth quarter.

Freshman Cody White, who had 99 yards on just six catches, along with Hunter Rison accounted for two pivotal plays on the drive. Facing a third-and-19, Lewerke found White for a 16-yard reception, setting up a manageable fourth-and-three, before Rison got just enough on a 4-yard reception to keep the chains moving.

“Cody made a great catch ro got us close enough there to decide on fourth down,” offensive coordinator Dave Warner said. “Fortunately for us, we went for it on fourth and got the first down.”

MSU’s defense stood tall on the ensuing drive, holding the Hoosiers to just two yards and forcing a three-and-out and the ninth Whitehead punt on the day. On the ensuing Spartan drive, White had another pivotal third-down conversion, this time on a 34-yard reception before Scott danced into the endzone from 18 yards out for his first score on the day.

“For our freshman receivers to go out there and make those plays, those were some big plays,” Dantonio said. “I thought Cody and Hunter both made some big plays at big spots in the game.”

The Spartans defense held up and forced one more game-sealing stop to ice the game 17-9. Lewerke finished the game 16-for-29 for 185 yards and one touchdown. The Spartan offense woke up in the second half, accounting for 162 yards in the half, sparked by a couple big plays from freshman receivers.

“The freshmen made a name for themselves today,” offensive coordinator Dave Warner said. “This was their opportunity to shine when it came down to the end of the game.”

The defense stood tall in crucial spots drive and drive again, similar to many of the games thus far this season. Sophomore linebacker Joe Bachie continued his stellar play, tallying 13 tackles on the day and forcing a fumble. Sophomore cornerback Justin Layne pitched in 10 tackles as well, holding the Hoosiers’ leading receiver Simmie Cobbs Jr. to just 53 yards on 7 catches.

Michigan State is now winners of their last four games, improving to 6-1 on the season, and given the way last season faired, bowl eligibility has to be a comfortable feeling for Dantonio and co.

“Win No. 6 is big for us this year, considering we didn’t get there last year,” Dantonio said. “Our next goal is to finish October 5-0 and get into November.”

The Spartans head to Evanston next weekend, where they’ll match up with Pat Fitzgerald’s Northwestern Wildcats (4-3, 2-2 B1G). The game is set to kick-off at 3:30 p.m. with the TV network yet to be announced.