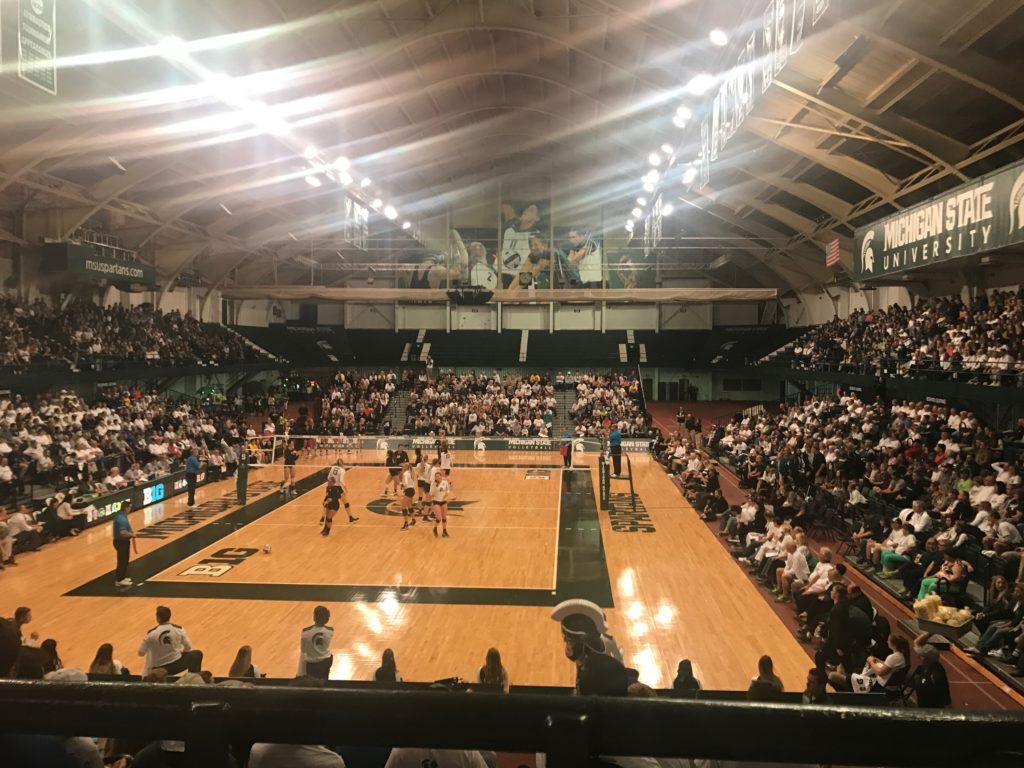 EAST LANSING, Mich. — Jenison Field House was jam-packed with Spartan and Wolverine fans Thursday night for a rivalry volleyball match. The theme of the day was “Jam Jenison,” and it was a big night for Michigan State volleyball, considering over 4,900 guests were there. The rival game between No. 10 Michigan State and Michigan was as intense as expected. After four passionate sets, the Spartans left with a victory: 25-19, 25-27, 25-21, 25-16.

“Michigan State versus Michigan is always a fun game,” Spartan setter Rachel Minarick said. “Jam Jenison is a great event for us. So it’s an emotional match. Michigan always plays well against us and we try to do our best.”

Minarick had a career-high 58 assists on the day, beating her previous personal best she set as a freshman with 55.

A much anticipated first point was earned by the Spartans. After the icebreaking start, the teams went back and forth with incredible saves and long rallies. Giving it their all, the Wolverines did whatever it took to keep the ball in play; pancakes, kicks, dives and more. Even with their determination, Michigan State kept the lead at 9-3. The first set was full of electric kills and jaw-dropping digs.

As the set proceeded, Michigan State hitter Alyssa Garvelink helped the Spartans greatly. Through kills and blocks, the Spartans were able to combat the determined Wolverines, keeping the lead at 21-13. Autumn Bailey stepped up and aided State to finish the first set with a victory at 25-19. Bailey was quick to deflect praise, though, instead pointing to the large home crowd.

“It’s electric,” she said. “I mean they kind of will you forward when you’re struggling or even when you’re doing well. They’re always behind you.”

The Wolverines, full of intensity and eager to get a win under their belt, came out with aggression in the second set. The gap on the scoreboard was nonexistent. The Wolverines’ kills and quick defense were unstoppable, leaving the Spartans behind at 12-9. Michigan State volleyball did not give up. Bailey, put down two kills in a fierce comeback.

Megan Tompkins used her aggressive serves to get the Spartans to a tie with Michigan. The score was 21-21, and the energy in the room was out of control. Every point counted and was a battle to achieve. In the end, the Wolverines managed to use their offensive skill and won the set 27-25.

Having listened to their coach, the Spartans got straight to business in the third set, coming out with a 5-0 lead. Garvelink collected the first two kills of the set. The Wolverines suffered numerous mistakes in their offense, while the Spartans held up their end of the court. At 14-6, Michigan State was locked in for the win, or so the crowd thought.

Michigan was relentless. The Wolverine defense stepped it up and block after block shut down the Spartan hitters. Slowly inching their way back into the contest, the Wolverines got as close as 20-17. The Spartan defense was unable to dig up the roll shot and tips thrown down by the Wolverine offense. However, thanks to Spartan hitter Brooke Kranda and her overpowering attack, MSU won the set 25-21.

Garvelink talked about the adjustments the team needed to make to win, saying, “I think we had to focus back up on the game plan,” Garvelink said. “I think we went away from it a little in game two. So we knew we had to regroup and be better.”

Hearts raced and crowds screamed as the fourth set began. Both teams knew how crucial this set was to their potential victories, so the score stayed extremely even throughout the beginning of the set. Because of the Wolverines’ mistakes and the Spartans’ kills, the Green and White held a solid lead at 20-13. Always unrelentless, the Wolverines battled, so Spartans had to fight until the very last point, eventually winning the set at 25-16.

“I thought that was a really good match and Michigan really pushed on us and made us play the entire court defensively. I thought they came out hard and especially in game two and just really went after it and putting a lot of pressure on our team,” MSU coach Cathy George said. “I like the way we responded in games three and four and taking it to them a little but. We had to play and work really hard as a unit.

After a rough week of two Big Ten losses against No. 4 Nebraska and No. 2 Penn State, the Spartans now have a win under their belt. Michigan State volleyball heads to Maryland on Saturday.

“There’s some things we need to clean up on our side, but really we just refocus for the next team,” Bailey said. “It’s nice to have a win under our belts, but you just move on to the next.”