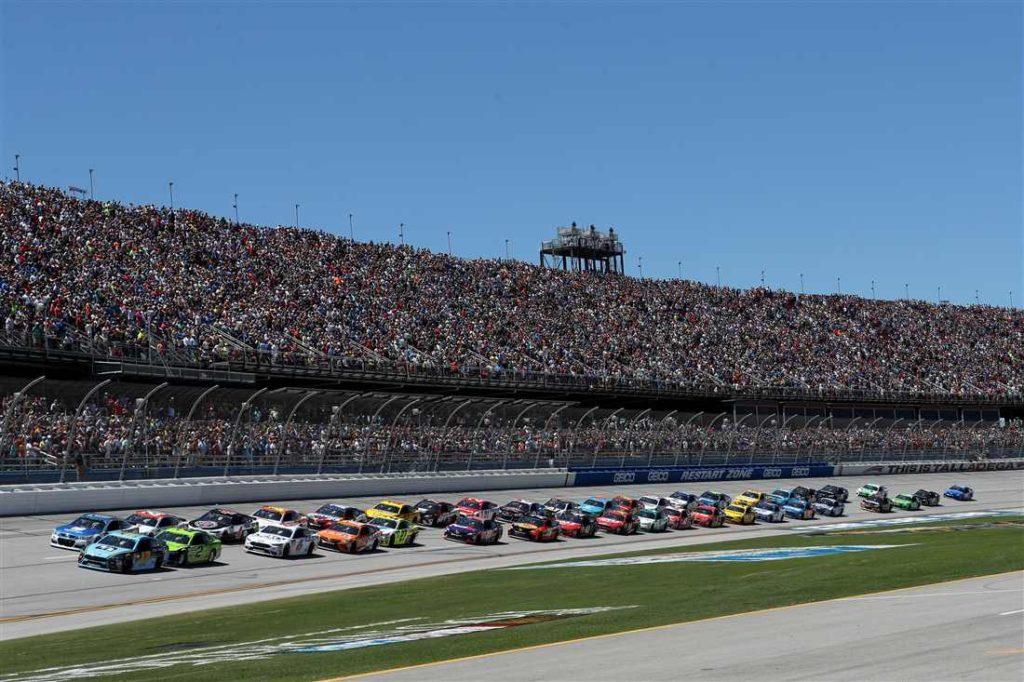 The Monster Energy NASCAR Cup Series heads to the behemoth 2.66-mile Talladega Superspeedway this weekend for the Alabama 500. The race will be the second of the Round of 12, 31st of 2017 and the final at ‘Dega for Dale Earnhardt Jr. It’s going to be a good one, y’all.

LAST YEAR’S WINNER
Joey Logano won this race one year ago, making it two in a row in the fall playoff Talladega race for the driver of the No. 22. It was his second win of the season, second of his career at ‘Dega and it also clinched a spot in the Round of 8. This race might be remembered more for Logano taking a jack around the track with him upwards of 150 mph. But he overcame and got the win.

THE LINEUP
No, Talladega isn’t Hollywood. But when qualifying ended on Saturday afternoon, it seemed like it. Because Dale Earnhardt Jr.—in his final Talladega start—put his No. 88 on the pole.

“I got chills,” Earnhardt Jr. said after winning his pole of his career and first ever at Talladega Superspeedway in 34 starts. “Really, all the credit for getting a pole at a place like this goes to the team and goes to the car and the guys that work on it, the engine, the body men,” “We’ve got an amazing staff back at Charlotte that builds some awesome stuff […] this place has meant a lot to me. It’s awesome to hear those fans happy for us, and hopefully we’re going to give them a lot more to cheer about before this weekend is over.”

Regardless of the moment, they usually involve an Earnhardt. And although Jeffrey, Dale Jr.’s nephew, will still be racing next season, it won’t be Senior, and it won’t be Junior.

This Sunday marks the final time that the Kannapolis, N.C. native will race at Talladega. A track that he has seen enormous success at, garnering six wins, 12 top fives and 16 top 10s. But the weekend has already marked a day of firsts, as well.

The speedway gifted Dale Jr. his father’s 1979 No. 2 Chevrolet Monte Carlo that was run in The Intimidators rookie season and when he won the first of his seven championships in 1980. Junior, smiling ear to ear, drove the No. 2 around Talladega and will be able to take the car back to North Carolina. In terms of “Apprec88ion Tour” gifts, this one takes the cake.

CAN THE FORDS KEEP IT ROLLING
Besides the question of whether Joonyer will win, all eyes will be on the Blue Oval posse this weekend, as they look to earn yet another superspeedway victory.

The Fords have always had a knack for winning on restrictor plate tracks. From the earlier days with drivers like Dale Jarrett, Bill Elliott, etc. to the new era of Brad Keselowski, Joey Logano and now Ricky Stenhouse Jr. But it isn’t coincidence. It’s because of the power under the hood.

Roush Yates Engines have been powering the Blue Ovals to the winner’s circle for almost as long as the sport’s been around. And with the recent passing of Hall of Famer Robert Yates, the Ford drivers would love nothing more than to bring a win back to their team—for Robert.

TRUEX JR. BREATHING EASY
There will be 11 drivers on the edge of their driver’s seat for 500 miles on Sunday at Talladega—and Martin Truex Jr. won’t be one of them.

Thanks to his win last weekend at Charlotte Motor Speedway, the No. 78 is locked into the Round of 8, but nobody else is. Sure, Kyle Busch and Kyle Larson have a ton of playoff points. Sure, Ricky Stenhouse Jr. and Brad Keselowski are dominant on plate tracks. But at Talladega, anything goes. And MTJ won’t have anything to worry about for once.

“It’s going to be pretty awesome going to Talladega and say, oh, what the hell, let’s go race,” Truex Jr. said after his win last weekend. “Doesn’t matter if we crash. Talladega has just been a tough track for us just to finish. I mean, last year we probably had the best car we’ve ever went there with, and we ran 20 laps and blew up (failed to advance to the next round).”

As for everyone else, though, they can’t rely on an automatic advancement to the next round. Anything can, will, and has happened in the past at Talladega. “The Big One” will come out and grab you at any moment with no warning. Or a blown engine, like what happened to Truex Jr. (and Keselowski) last season will ruin your championship hopes.

PREDICTION
As stated on this week’s episode of Victory Lane, I’m going with Dale Earnhardt Jr. for the win this week. Why the heck not? I ain’t got nothing to lose, and neither does Junior. Raise Hell, Praise Dale. That’s the motto for this weekend, and the fans at Daleadega are going to live it.