Lions’ Den: the importance of Jarrad Davis, how to fix a struggling offense 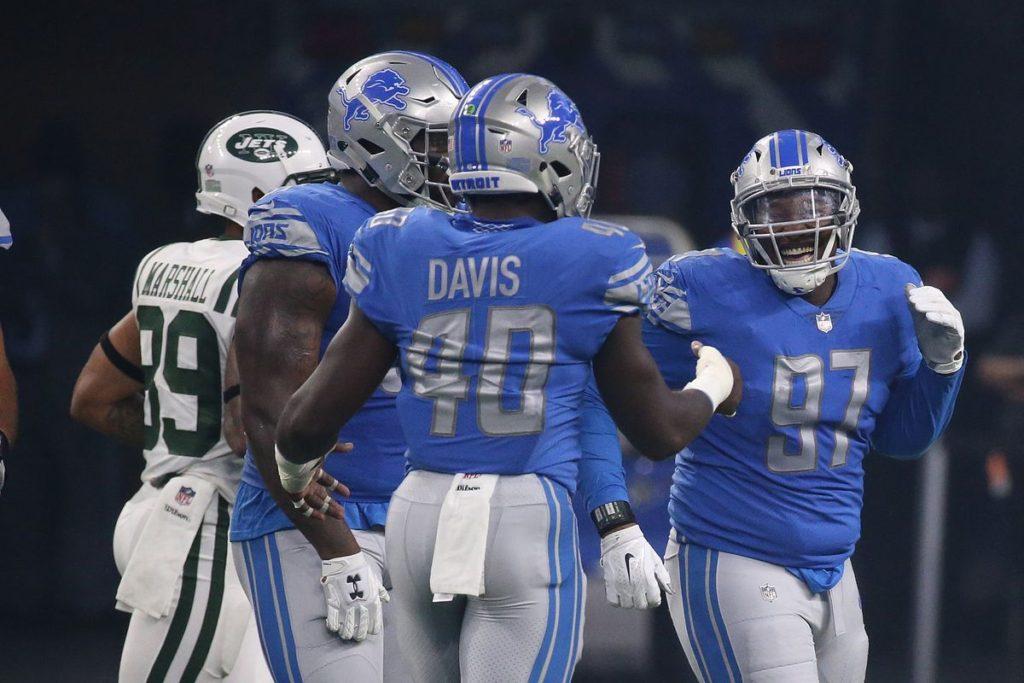 Defense is different with Davis
By John Dolan

While the overall performance of the Detroit Lions in last week’s 27-24 loss to the Carolina Panthers was a disappointment, the performance of the run defense was not. The Lions held Carolina to a measly 28 rushing yards on 28 carries the entire game.

This wasn’t the first time the Lions run defense has dominated either. Week 1 vs. the Arizona Cardinals, the Lions let up 45 rushing yards. Week 2 vs. the New York Giants, they allowed 62 rushing yards.

What’s the congruity between these three games? A healthy Jarrad Davis was starting at middle linebacker.

While just a 21-year-old rookie, Jarrad Davis is the most important player the Lions have had on defense in years. With linebacker pegged as their biggest position of need, the Lions took the 6-foot-1, almost 240-pound powerhouse in the first round of the 2017 NFL Draft.

Davis immediately made an impact, being named a starter early on in training camp, and led the Lions to impressive numbers against the run in his three games played so far this year. However, the two games Davis has spent inactive due to injury, the Lions run defense has faltered.

In a Week 4 tilt vs. the Atlanta Falcons at Ford Field, the Lions were demolished on the ground, giving up 151 rushing yards on only 28 carries. Atlanta running back Devonta Freeman had his way against the Lions front seven, including an 18-yard rush on third-and-one in the fourth quarter right up the middle, the spot of the field where Davis normally patrols.

The next week in Minnesota against the Vikings was no different. Vikings running back Dalvin Cook was running all over the Lions to the tune of over five yards per carry, and could have done much more damage had he not gone down with a catastrophic season-ending knee injury in the third quarter.

The Lions are a different team with Davis quarterbacking the defense. Despite missing two games, Davis is third on the team in total tackles with 23 through only three games. At the University of Florida, Davis was known for his ability to shoot through the gaps on the run and his work ethic. These traits seem to have transitioned seamlessly to the NFL, illustrated in this tackle-for-loss from the Carolina game:

Not only does Davis have the athletic ability to shoot through the gap and make a tackle-for-loss, but he also has the instincts to know when to do so. In this play, Davis is tipped off by the split receiver Ed Dickson, No.84, motioning in as wingback lead blocker and is in the backfield as soon as the ball is snapped.

While Davis looks great on film and his tackle statistics are impressive, he is also faring well analytically thus far as well. His 78.9 PFF grade, which is a grading scale that factors in how players do on every play of every game, ranks him as the 23rd best linebacker in all of the NFL, and 14th best rookie in the NFL, regardless of position.

The key for Davis now will be staying healthy. It could be difficult given his high-motor style of play, but his 240-pound frame is more than capable of taking its fair share of heavy hits.

This week, the Lions will go head-to-head with the New Orleans Saints, who aren’t exactly a rushing juggernaut, sitting at only 21st in the NFL in rush yards per game. With a healthy Davis in the middle of the Lions front seven, seeing the Saints eclipse 60 rushing yards the entire game would be surprising.

A win in Week 6 would be crucial for the Lions and Davis, who are looking to use the upcoming Week 7 bye week to get healthy for the upcoming heart of the schedule. It’s in all Lions’ fans best interest that Davis shakes off the head injury he suffered earlier in the season and stays healthy. If he does, he will be the face of Lions defense for the next decade.

Offense needs to figure it out
Noah Goad

Detroit Lions quarterback Matthew Stafford should be ready to play in a Week 6 matchup against the New Orleans Saints. Suffering a right ankle injury in last week’s loss to the Carolina Panthers, he shouldn’t miss any time.

With left tackle Taylor Decker out for several more weeks, the Lions have relied on tackle Greg Robinson from the Los Angeles Rams, who has not been performing well.

Protection has been hard to come by and could be preventing Stafford from making big plays. The Lions have only converted four passes of over 20 yards this season, tied for 21st fewest in the league.

The sparsity of reliable targets may be partially to blame. Receiver Marvin Jones Jr. hauling in just 14 of his 26 targets and tight end Eric Ebron just 12 of his 23.

The horrendous protection could be hampering Stafford’s production as well, or even offensive coordinator Jim Bob Cooter’s conservative play calling ability. Likely a combination of the two.

The Lions, who are ranked ninth in points scored this season, will face a fairly strong Saints defense. The Saints currently rank 12th in fewest points allowed per game with just over 19. However, New Orleans has had trouble stopping the opponents run game, averaging over 109 rushing yards allowed per game.

This should be a perfect opportunity for running back Ameer Abdullah to finally have a breakout performance. Abdullah’s rushed for an unimpressive 288 yards with one touchdown this season. That averages out to just over 57 yards a game. He’s desperate for a productive game.

The Lions running game as a whole has been disastrous. Detroit’s ranked 25th in the NFL in rushing yards. Ameer Abdullah is not the only one struggling, Theo Riddick has lagged behind this season too.

Riddick’s production has dropped way off this season. In Riddick’s first five games last season, he had 361 total yards with four touchdowns. This season, he has just 166 total yards and one touchdown going into Week 6. Both Riddick and Abdullah will look to have more productive games in Week 6.

Despite the Saints’ 2-2 record, this will not be an easy win for the Lions. The offensive line has to provide better protection for Stafford, which should help him make bigger plays. The Lions also need a boost out of their running backs.