Truex Jr. rolls to sixth win of season at Charlotte 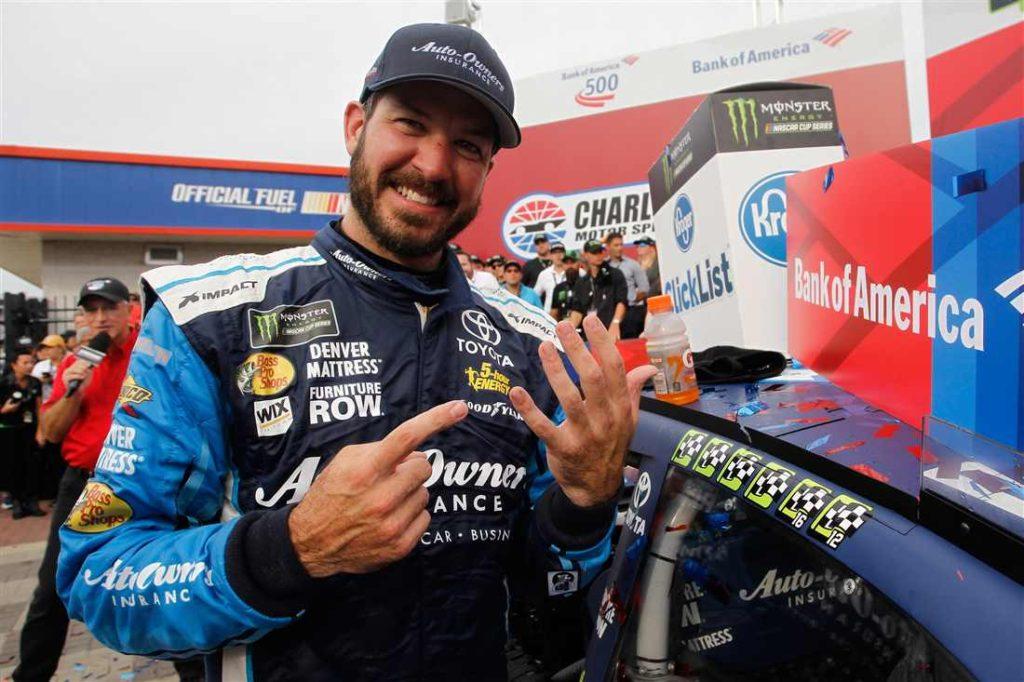 Sunday afternoon at Charlotte Motor Speedway ended up with a familiar sight: Martin Truex Jr. and the No. 78 Furniture Row Racing team celebrating in Victory Lane. But it didn’t feature him leading the most laps, running up front all afternoon and dominating the 500-miler.

The 334-lap Bank of America 500 from the 1.5-mile quad-oval was Truex Jr.’s sixth victory of the season in the Monster Energy NASCAR Cup Series, 13th of his career and second at Charlotte.

THIS ONE WAS DIFFERENT
Martin Truex Jr.’s victories are pretty textbook: start inside the top five (probably on the front row), win a stage or two, lead the most laps, and wind up in the winner’s circle. But the Bank of America 500 was completely different than the other five wins he’s had this season.

He didn’t lead the most laps, he didn’t win the first two stages and he didn’t start up front. The No. 78 took the green flag (which fell one hour earlier than scheduled due to inclement weather in the area) in 17th, his worst starting position since Daytona in July, where he started 25th. He only led 91 laps and ended up finishing outside the top 10 in stage one, failing to earn a stage point for the first time since that same Daytona race. But then, they went to work.

On lap 234 with 100 laps remaining from CMS, Truex Jr. was on the bumper of Kevin Harvick’s No. 4 Ford, and was gone in an instant. He assumed the lead from there after a round of green flag pit stops and never really looked back. His pit crew had a big hand in helping MTJ grave Victory Lane once again, as they didn’t lose spots a single time throughout the event.

“Unbelievable win. Just a total team effort,” Truex Jr. told NBC following the victory. “Every guy on this team just did a perfect job today—and I can’t be more proud of them. You dream about days like today. I don’t know if we had the best car, but we damn sure got it in Victory Lane.”

THE FIELD
Following Martin Truex Jr. across the finish line in second place was Chase Elliott. For the second consecutive weekend and the sixth time in his MENCS career, he was the runner-up.

“It was a hard-fought day and really, from where we were in those middle stages,” Elliott told NBCSN following his second-place run. “I was proud of the way we fought back and were able to get back to the front. It’s frustrating to run like this. We’re definitely tired of running second. But, if we keep running like we are, hopefully the opportunities will be there.”

HARVICK DOESN’T CLOSE
Kevin Harvick led 149 laps, the most in the field on Sunday afternoon, and both stages one and two to boot. But he couldn’t live up to his nickname as “The Closer” and win the race.

“I would get close, and then I would get loose, and as the day went I just got looser on the entrance to the corners,” said Harvick of his battle with eventual race-winner Martin Truex Jr. “The car started bouncing really bad and started losing grip as the (PJ1) went away and kind of lost what I had at the beginning of the race – to arc it into the corner and do all the things I needed to do to get through the middle of the corner and be in the throttle.”

Harvick’s lane was right in the sticky substance—up high. Not the extreme high lane, but about one lane up from the middle. The substance wouldn’t be conducive to the quickest laps throughout the race. And that’s why Martin Truex Jr. eventually caught and passed Harvick.

“I knew where I was running was kind of questionable as to how long it would last,” the Bakersfield, California native said of his racing line throughout the afternoon around Charlotte Motor Speedway. “And the entry was the first part that gave up for me, and I just had to be really cautious getting in there. That’s why I lost my speed from the first half of the race.”

KYLE TOUGHS IT OUT

The box score will show that Kyle Busch led 22 laps on Sunday, but his race included everything but feeling like the leader. He hit the wall on lap 135 and damaged the right side of his No. 18 Interstate Batteries Toyota. But in doing so, the crush panels on his car were damaged so much so that all the fumes were seeping into the cockpit, and clean air was few and far between.

“I’m better now,” Busch said upon exiting the infield care center to NBC, whose carbon monoxide levels were in the double digits. “It just got so hot, that literally, you felt like you were going to puke and just trying to make it to the end of the race and luckily we did. And from there, just trying to get cooled back down and get my body temperature back to normal.”

Busch told his team over the radio about midway through the race that he would need medical attention upon exiting the car—and he was right. He immediately went to the ground next to his car and laid down and received medical attention before going to the infield care center.

“I felt like I had heatstroke just from being inside the race car for 200 laps with the crush panels knocked out of it,” said Busch. “Overall, it was just the hottest I’ve been in the car. I didn’t feel sick from the CO or anything like that. I just felt heatstroke.”

QUIET, TOP 10 DAYS FOR GANASSI
Don’t look now, but Kyle Larson wasn’t the highest finishing Chip Ganassi Racing car on Sunday—and he wasn’t the quickest overall throughout the entirety of the race, either.

That honor belonged to Jamie McMurray, who came home fifth. His teammate and three-time winner this season in Larson came home 11th after Kurt Busch got loose underneath the No. 42, which forced the Elk Grove, California native to fall back with under 10 laps to go a tad.

Larson also wasn’t helped by himself or his pit crew. He missed his pit box entirely once and had a slower stop when his tire carrier slipped and fell during another. But McMurray, who hasn’t won a race this season, was able to quietly and impressively finish in the top five.

“We had probably the fastest car at the beginning,” McMurray told NBC following his seventh top 10 finish of the season on an intermediate track. “This is a really good track for me. Every year we seem to run well here. Our cars have been awesome this year. I had really good pit stops. We had everything going for us. Just need to line up in the correct lane on the restarts and have those first good two or three laps. Overall just a solid day.”

COLLAR GETTING TIGHT
After race one of the Round of 12, Ricky Stenhouse Jr., Ryan Blaney, Brad Keselowski and Matt Kenseth are the four that sit below the cut line to transfer to the Round of 8. But with Talladega and Kansas on the horizon, anything can, and usually does, happen to multiple playoff drivers.

Stenhouse Jr. is heading to ‘Dega, where he has already won this season and is considered a favorite to win again. Kenseth has visited Victory Lane at Kansas and ‘Dega before, Keselowski dominated restrictor plate tracks two years ago and Blaney has great power under the hood. What am I trying to say, basically? Although the points might not show it: it’s wide open.

WHAT’S NEXT
Talladega Superspeedway has been talked about for 51 weeks, and now it’s time to finally get to Alabama and settle who comes home with the hardware, and who goes home on a wrecker.

The 49th annual Alabama 500 is scheduled to go green at approximately 2:20 p.m. ET on Sunday, October 15 with television coverage on NBC. Joey Logano is the defending winner of that event, but all eyes will be on Dale Earnhardt Jr. in his final career start at ‘Dega.