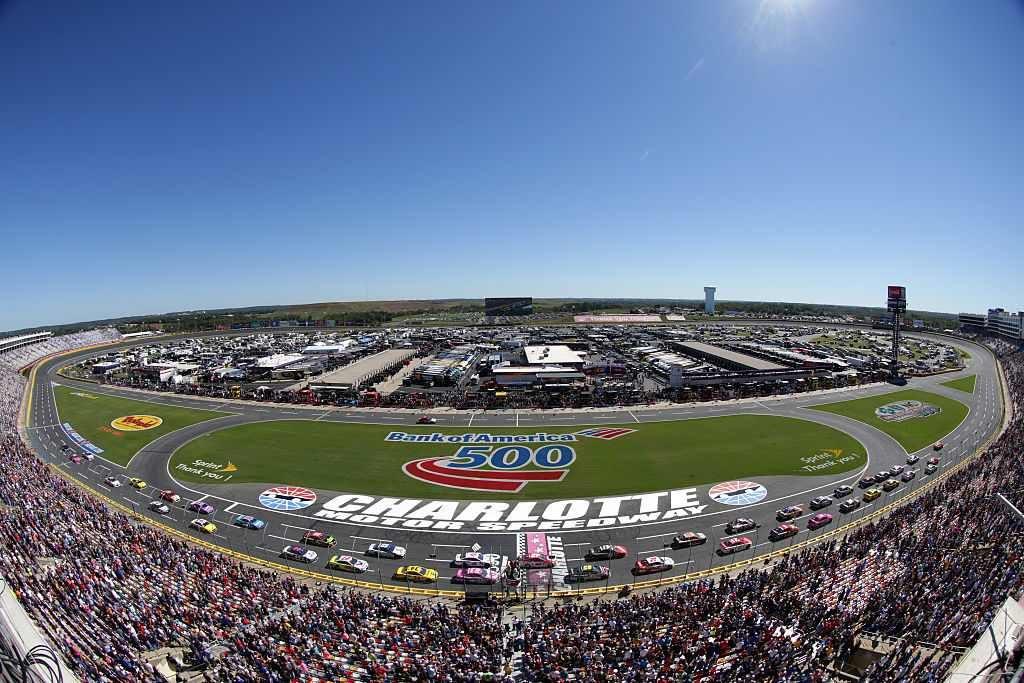 After one round of the 2017 NASCAR playoffs, 12 drivers remain with a shot at the championship. The Round of 12, and the next step to earn that coveted Monster Cup, begins on Sunday afternoon from Charlotte Motor Speedway in the Bank of America 500.

LAST YEAR’S WINNER
Jimmie Johnson snapped his 24-race winless streak with his eighth win at Charlotte, his third of the season and the 78th in his career in this race one year ago. He led 155 of the 334 laps around CMS and in doing so, he and his No. 48 championship squad clinched a spot in the Round of 8.

THE FIELD
Denny Hamlin won the pole for the Bank of America 500 with a fast lap of 191.598 mph (28.184 seconds). The pole was Hamlin’s first of the season, second at Charlotte Motor Speedway and his 25th of his Monster Energy NASCAR Cup Series career.

His Joe Gibbs Racing teammate Matt Kenseth will roll off alongside Hamlin in second-place, with Kevin Harvick, Kyle Busch and Clint Bowyer completing the top five starters. Brad Keselowski, Chase Elliott, Kurt Busch, Kasey Kahne and Kyle Larson will round out the top 10.

ANOTHER RACE, ANOTHER TOYOTA WIN?
They’ve led the most laps, they’ve won every race in the playoffs thus far, they can’t (and won’t) stop earning playoff points and they’re favorites to do more of that this Sunday.

Yup, the Toyota’s are killin’ it right now. And they show absolutely no signs of slowing down. It might be getting repetitive to read—and listen to—and watch every week, but they’re just that good. NASCAR hasn’t given them a distinct advantage: they’ve just done more homework than the Fords and Chevrolets, and it’s paying off in the biggest way possible in these playoffs.

It’s been Kyle Busch and Martin Truex Jr. for the most part, as it’s been well documented that those two have won every playoff race thus far and dominated them. But Denny Hamlin and Matt Kenseth aren’t slouches either. Plus, rookies Daniel Suarez and Erik Jones have been consistently running inside the top 15 and improving every week. Toyota = dominant.

A WHOLE NEW ROUND
A new round means a points reset: music to the ears of many in the Round of 12.

Martin Truex Jr. and Kyle Busch have run away from the pack, garnering playoff points that teams would kill for. Kyle Larson can also be lumped into that group. Those three have been widely regarded as locks for Homestead-Miami Speedway. But who will the fourth be?

Brad Keselowski, Jimmie Johnson and Kevin Harvick would be the logical, smarter choices. Veterans, former champions, drivers who have won at all three tracks in this round (Charlotte, Talladega and Kansas) and have been relatively quick throughout the entirety of the season.

But what about guys like Matt Kenseth, Ryan Blaney, Jamie McMurray, Denny Hamlin, Chase Elliott and Ricky Stenhouse Jr.? They’ve all been consistent enough in 2017 to get to where they’re at—and some have won a handful of races at a handful of tracks along the way.

Kenseth is doing what the Cambridge, Wisconsin native does best: quietly run up front. Blaney hasn’t dazzled in the postseason, but is ready to strike at a moment’s notice. McMurray ends up in the top ten race after race, Hamlin is in the best equipment in the sport right now, Elliott is hungrier than ever to avenge his loss last weekend at Dover and Stenhouse Jr. has ‘Dega in this round, which is music to his team’s ears.

Translation: it’s anybody’s game. The Toyotas of Truex Jr. and Busch are virtual locks to advance, especially with the plethora of playoff points that they’ve accrued. And Larson is as well. But the bottom four when the Round of 12 concludes could include former champions, young stars and everyone in between. That’s the beauty of this format: you never know.

GRIP ENHANCEMENT
That’s right, the peanut butter and je—I mean PJ1, VHT, grip enhancement, whatever you want to call it, it back and better than ever this weekend at Charlotte. Or is it?

The sticky substance, aimed to enhance the on-track product, has been used at a handful of tracks so far this season including New Hampshire Motor Speedway and CMS. This weekend, the speedway is using it again, primarily in the high line. But there was a problem.

A sprayer head on one of CMS’ traction compound spraying machines was partially clogged, according to Don Hawk, senior VP of business affairs for SMI. The speedway is fixing the problem and will aim to spray the PJ1 on the high lane to make it more raceable.

On Friday, Dale Earnhardt Jr. Kyle Busch and Brad Keselowski were among the handful of drivers that wound up contacting the wall during practice and complained about the PJ1.

Realistically, there’s about 5-10 drivers that can win outside of the 12 playoff contenders, but with Talladega Superspeedway coming up, it’s anybody’s game. And everyone knows that.

Clint Bowyer would love nothing more than to snap his winless streak and get his first win with Stewart-Haas Racing in the No. 14. The same goes for young guns like Daniel Suarez, Erik Jones, heck even Ty Dillon. What about Danica Patrick? You never know how cautions might fall. Trevor Bayne, Dale Earnhardt Jr.—oh and Joey Logano. Remember him? Yeah, I do, too.

Look: all I’m saying is that any of these drivers can win. Will they? Nah, I wouldn’t bet on it. But we’ve seen crazier things happen, a la Trevor Bayne 2011, David Ragan 2013, etc. That’s why they take the green flag and run 400 and 500 miles. Because anything can happen.

PREDICTION
As stated this week on Victory Lane (yes, I remembered to make my prediction this time!), I think this is going to end up being the MTJ show once again. Not 2016 Coke 600 dominance, but I think the Martin Truex Jr., his No. 78 Furniture Row Racing team and Toyota are too good right now. Vegas has him as a 2/1 favorite to win for a reason: they’re the best. And they’ll show it.