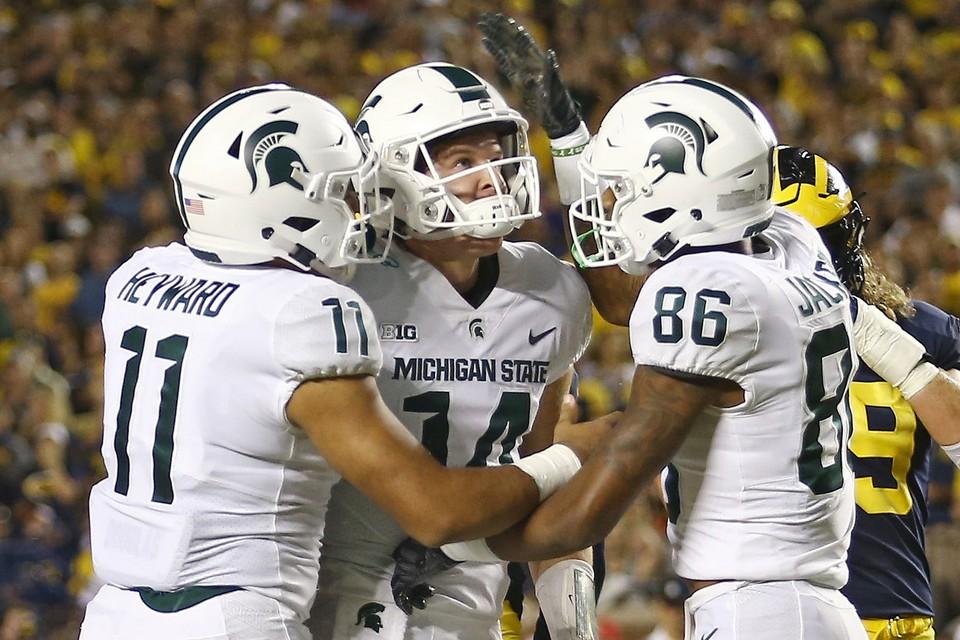 ANN ARBOR, Mich. — When the puddles dried up and the Paul Bunyan trophy left the field, there was one statistic you couldn’t ignore, more meaningful than five Michigan turnovers or two Brian Lewerke touchdowns.

Eight wins in 10 years against Michigan.

Dantonio’s reputation for winning big games has already reached cult status, so in all honesty, I shouldn’t be surprised at Saturday’s result. However, the first-half offensive gameplan and a second-half downpour did the trick for Michigan State in their fourth win of 2017.

What struck me the most about the win over Michigan was what made that game so unique, even for a rivalry that has been played 110 times.

Of the thousands of games played across the country each year, how many of them are played in such a shifting pattern of weather? How often does a sophomore quarterback suffer a season-ending injury one year, then come back the next year to be responsible for both his team’s touchdowns against the very same team?

There were so many small things about this game that “Michigan State 14, Michigan 10” can’t quite cover. The second-half weather definitely affected John O’Korn and the Michigan offense, who shot themselves in the foot to a degree Spartan fans were familiar with following MSU’s loss to Notre Dame.

Three straight interceptions in the third and fourth quarters in a massive rainstorm might be what both sets of fans remember most about 2017’s edition of this game. However, who Spartan fans should remember most following this upset win is David Dowell.

The junior safety has started to shine in a platoon role opposite Khari Willis at safety. Outside of a long touchdown pass negated due to a Michigan hold, the MSU secondary more than held their own.

Josiah Scott had a solid performance matched up in one-on-one coverage with Kekoa Crawford. Scott, along with Justin Layne, made the plays they had to in run support.

Dowell’s two interceptions and fumble recovery were massive plays to cut off any offensive pressure from Michigan. The play of both David and his brother Andrew have improved by leaps and bounds from a year ago. I think David’s explosiveness really makes a difference in the MSU secondary, and I would advocate having him start the rest of the season at that field-side safety spot.

Another thing many will forget as the days pass is the play of Kenny Willekes. Many Michigan websites derided the redshirt sophomore from Rockford, Mich. heading into this game, assuming that he was a weak point in the defense due to his former walk-on status. Willekes left Michigan Stadium with two sacks and a performance that silenced many of the observers that doubted this MSU defense.

And of course, the cherry on top of the defensive performance was the play of Brian Lewerke. His first half was all the Spartans really needed given O’Korn’s self-destructive behavior offensively. His rushing touchdown in the first quarter was the first sign that State had come to play up front, and the passing touchdown was a remixed version of the long passing play against Michigan in 2015 to Trevon Pendleton that set up a touchdown.

No one is going to say Lewerke had the best game of his career, but the pattern of making plays he’s shown in 2017 came to the forefront again on MSU’s final drive. A fumbled snap on a third-and-three play led Lewerke to the left side of the line, where he rolled over top of Brian Allen to pick up a first down.

It doesn’t take a whole lot of imagination for someone to project Lewerke’s trajectory for the rest of his time at MSU. Is he as good as Connor Cook was in 2013? Not exactly. It’s still been a few games since MSU cracked the 20-point mark.

However, this result for MSU has been exactly the type of game that we’ve come to expect from Dantonio during his 11 years at MSU. Michigan was supposedly the far superior team, with better athletes, better coaching, you name it.

That performance from MSU on Saturday night disproved all of that and more. Up front, the MSU front seven sacked O’Korn four times. Meanwhile, Lewerke avoided being sacked once, mainly down to solid awareness but also a credit to Warner, who’s first half play-calling was his finest in five years as a co-offensive coordinator.

In space, while Michigan stretched the Spartan defense in ways we hadn’t seen so far, MSU’s defense bent, but did not break. Eventually, we’ll get to the point where we don’t need to mention Joe Bachie anymore, but until then, let’s just remember that he’s only in his sophomore season. A sack, a forced fumble, an interception and ten total tackles is a massive stat line for anyone in the country, and Bachie has been putting up pretty similar numbers each week this season.

There were still a few warning signs for the weeks ahead, even as the schedule opens up a bit for the Spartans. Penalties, some borderline, some preventable, were as high as they’ve been all season between a couple of personal fouls for late hits or the occasional false start.

However, this win over Michigan has a lot of bearing outside of the rivalry. MSU jumped into the AP top 25, slotting in at No. 21. Outside of the games at home with Penn State and on the road with Ohio State, who’s really going to overwhelm MSU? Minnesota just lost to Purdue by two touchdowns, Indiana scored only three touchdowns against an FCS school, and Maryland was just decimated by Ohio State.

All of a sudden, MSU’s season looks a whole lot easier thanks to a win over Michigan. Under Mark Dantonio, that phrase sounds pretty logical.

*Munn gets a pass for not being around long enough.