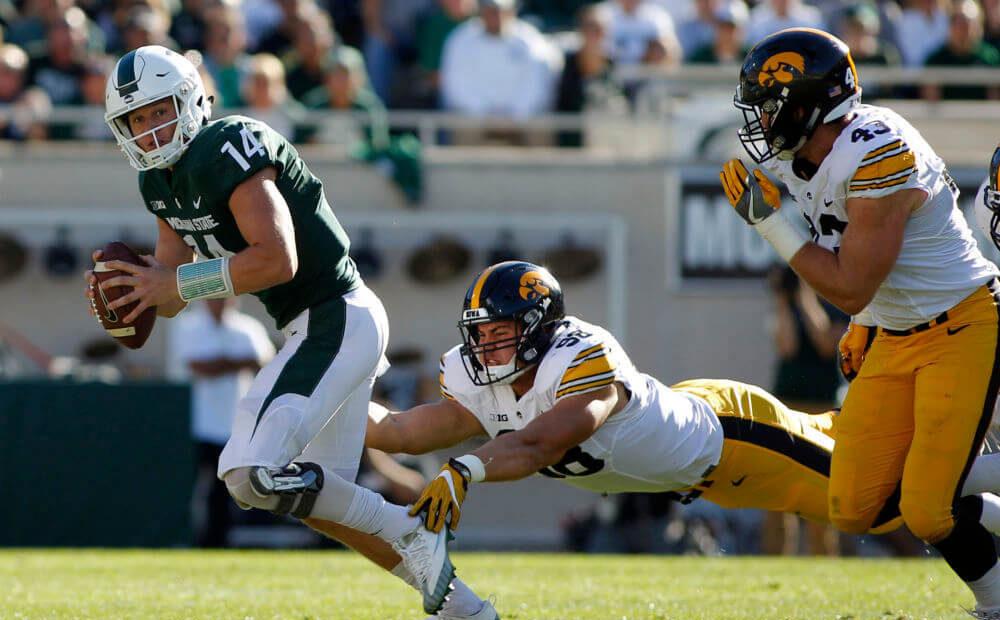 EAST LANSING, Mich – Despite the earliness of Iowa and Michigan State’s Week 5 matchup, this was as close to a must-win game for both teams. After both teams lost last weekend, they faced off in a pivotal swing game to open up MSU’s Big Ten conference play. Michigan State followed up last week’s embarrassing performance and started conference play with a tough 17-10 win over Iowa.

“Huge win for us today, we’ve very excited for our football team,” head coach Mark Dantonio said. “We knew it’d take all four quarters to make it through this game, that’s the way it always is with Iowa.”

With Notre Dame jumping out early on the Spartans last week, MSU returned the favor this week against Iowa, going 75 yards in 3:10 on their opening drive, capping it off with a 22-yard Felton Davis touchdown reception. Quarterback Brian Lewerke looked sharp on the first drive, completing all five of his passes and hooking up with Davis on several big plays.

“I think for the most part I made good decisions today,” Lewerke said. “When you’re plus two in the turnover margin like we were today, that’s a recipe for success.”

Iowa came into the game 3-1 after losing to fourth-ranked Penn State last weekend on the final play of the game in Iowa City. With Iowa hosting Illinois next week, the game had bigger implications for Michigan State, who travels to Ann Arbor next weekend.

Michigan State’s defense played lights out early, forcing an early Iowa punt, set up by two key defensive plays from sophomore Joe Bachie. Bachie had himself one heck of a ballgame, leading the Spartans with nine tackles, three of them for losses and he added a sack as well.

“We knew this was going to be a 12 round fight with this team,” linebacker Chris Frey said. “We came into practice this week with a different mindset and we executed greatly when we needed to.”

MSU scored again early on a ten-play, 31-yard drive capped off by another Felton Davis touchdown, this time on a beautifully thrown jump ball from six yards, giving the Spartans a two score lead. Davis led the Spartan receivers with a career high nine catches for 114 yards and two touchdowns.

The Hawkeyes got on the board in the second quarter, driving 72 yards on just ten plays, with running back Akrum Wadley jumping into the endzone untouched from nine yards out. The scoring drive was set up on a big third down conversion by quarterback Nate Stanley connecting with Ihmir Smith-Marsette on a 31-yard gain down to the Spartan eight yard line.

MSU continued to be given more than favorable field position throughout the second quarter, but could only muster a Matt Coghlin 38-yard field goal with 43 seconds left, giving the Spartans a 17-7 lead at the half. Lewerke was 10-15 for 105 yards and two touchdowns at the half, but it was Felton Davis who stole the show, with a career high seven first-half catches for 88 yards.

“I thought Brian played pretty well today,” Dantonio said. “I thought he made good decisions throughout the game today.”

After Stanley fumbled the ball inside the Spartan ten yard line on Iowa’s first drive of the second half, the MSU offense stalled with LJ Scott being stopped short on a fourth-and-one attempt, giving the ball back over to the Hawkeyes. Iowa was driving until Josiah Scott forced a Brandon Smith fumble, which was recovered by Chris Frey.

After having eight turnovers through their first three games, the Spartans were much cleaner with the football today, and it was their defense that was outstanding, forcing two Hawkeye turnovers and two sacks, along with six quarterback hurries.

“The D tackles knew this game was going to be on their shoulders,” defensive coordinator Mike Tressel said. “They knew what they had to do and they did that very well today.”

“If you can’t run the ball good things usually happen,” Dantonio said. “The turnovers were big especially because they took some points off the board for us.”

The Spartan rushing attack struggled mightily again today, mustering only 88 yards on the ground, with LJ Scott having only 28 yards on 14 rushes. Lewerke again was the Spartans leading rusher, rushing it 12 times for for 42 yards. Lewerke finished 18-28 for 212 yards and two touchdowns through the air.

“Brian took a big step forward today,” offensive coordinator Dave Warner said. “I told him that after the game and we need him to just keep pushing in that direction.”

This was a huge win for Michigan State with their matchup with in-state rival and eighth-ranked Michigan looming next weekend in Ann Arbor. For confidence’s sake, the Spartans have to feel better heading into that game 3-1 fresh off a win over a very good Iowa team, rather than coming in 2-2 with no real impressive wins to show for. Next week’s game will be under the lights in the Big House, with kickoff set to start at 7:30 p.m. on ABC.