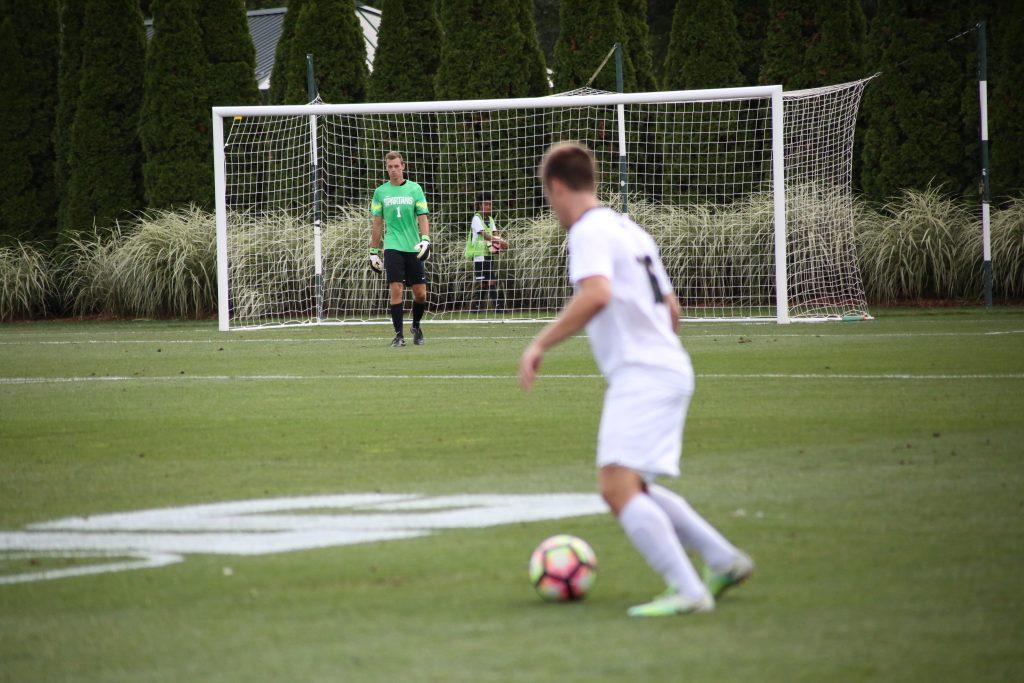 EAST LANSING, Mich. — On Friday night, the Michigan State men’s soccer team began their 2017 home campaign with a 1-0 victory over Dartmouth in front of a sold out crowd.

It was a record night for Michigan State’s soccer program. It was the first game under the lights at DeMartin Stadium, and it was the largest recorded attendance in its history. With a total of 3,515 packed into DeMartin, some fans took to the neighboring bleachers at Secchia Stadium once it became standing room only.

“It was great,” coach Damon Rensing said. “More than anything, the crowd was unbelievable. I mean the Red Cedar Rowdies were awesome, you can just tell the energy as the night and the sun went down. I thought this was a good pre-cursor to show what night games can really do. I thought the crowd was more electric, more vocal. The pace of play was good and they were excited. For the first night, it can’t get better than this.”

The first half was filled with back and forth action, with the Big Green controlling most of the possession. The Spartans’ redshirt senior keeper Jimmy Hague and his defense were put to a test, being forced to make four saves on seven shots versus MSU’s five.

“We were a little excited, we turned some balls over,” Rensing said. “Dartmouth is a good team. They’ve made the NCAA tournament the last three years, they’re the three-time Ivy League defending champs, so when they get the ball, they’re going to keep it too.”

However, the Spartans would land the only shot that mattered. Late in the first half, junior forward DeJuan Jones was substituted into the game and made his impact immediately felt.

“I just try to make the most of my minutes,” Jones said. “It’s just nice, I’m coming in with fresh legs [when] other guys have been going [for] 20-30 minutes. I’m bringing some energy off the bench.”

In the 37th minute, off a corner kick by Connor Corrigan, Jones was able to find the back of the net for his first goal of the season, and the deciding factor for the match. Corrigan and Michael Pimlott were credited with assists.

“You always want to get the first one,” Jones said. “Hopefully they start coming in now. I got the monkey off my back.”

The Spartans were able to control most of the second half and remained on the attack.

“I thought in the second half we settled down and really controlled the game for large spells,” Rensing said. “And I liked [that] we pushed to get a second goal, we didn’t get defensive. I’d like to try and see us get that one, but all in all, a good performance.”

With this victory, Michigan State improves its record to 3-0-0. The win also marked Hague’s third shutout of the season.

“That’s just a great start. And only a start. So, I mean, we just gotta keep it rolling,” Hague said. “Defense [has to] stay compact and strong, and [we have to] keep scoring goals. So it’s only a start, but we look forward to keeping it going.”

Last season, one of the Spartans biggest goals was to “Defend DeMartin” and they did so by finishing the 2016 season with a 9-0-2 home record. With nine returning starters, this year is no different.

“Every time we play at home, we always want to win,” Hague said. “We never want to lose at home…with the lights especially. Our guys on the field, they just feed off the energy of the fans. So when fans come out, our guys work harder and they push us. It’s awesome to have them come out.”

Rensing believes these new lights will take DeMartin Stadium to another level.

“I’ve been in this program basically for the last twenty-five years and we’ve always envisioned how cool this place would be. And this is one of the best settings in college soccer. When you throw lights in it, it’s even more special.”

Michigan State is currently ranked No. 13 in the nation and will play Cleveland State on Monday at DeMartin Stadium and then travel to New Jersey to play Rutgers on Friday.