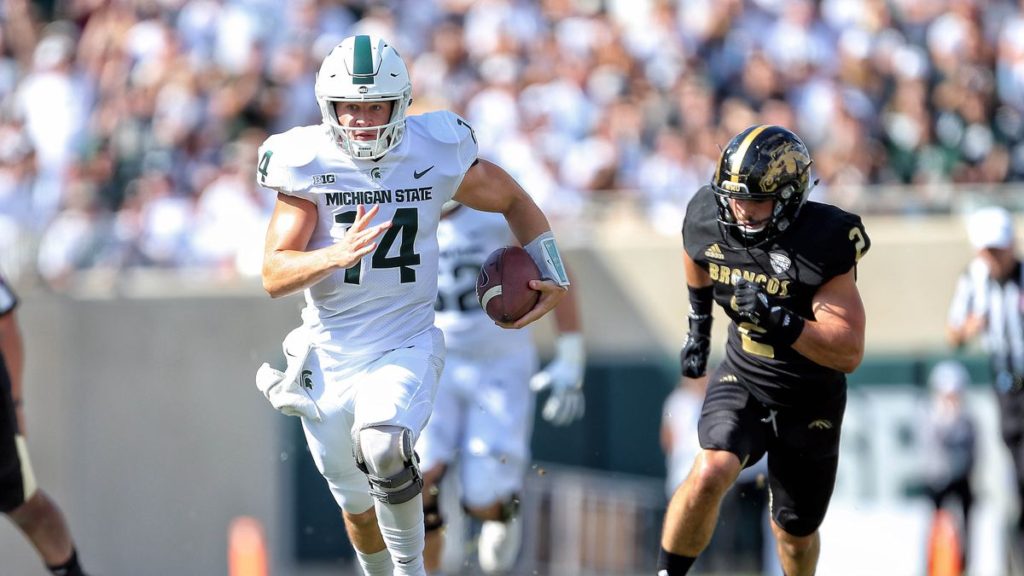 Those underclassmen also happen to be 2-0, and they own two comfortable wins over MAC opponents, including a team that played a New Year’s Six bowl in January. The sample size is still small, but there is a feeling that this team is nothing close to the 3-9 outfit they were a year ago.

“Some of those guys stepped up and I think they’ve grown,” offensive coordinator Dave Warner said. “Just that confidence factor certainly grows as guys gain experience and come out of games with wins.”

After recording just one sack against Bowling Green a week ago, MSU recorded four sacks in their 28-14 win over Western Michigan, including an impressive pair in the second half from linebacker Andrew Dowell and defensive tackle Raequan Williams. The Spartans’ defense has only allowed three points through two games, and they held the Broncos to just 195 yards of total offense.

“We made some tweaks in the things that we do. I’ll let you guys try to figure that out what they are as you watch the film,” co-defensive coordinator Harlon Barnett noted. “But, we tweaked some things up, and it’s made us better.”

Against a trio of solid Western running backs headlined by LeVante Bellamy, Michigan State was largely successful against the run. The Broncos picked up 263 yards on the ground against the top-ten USC Trojans last week, but could only muster 116 against MSU’s improving defensive front that features three sophomores.

Offensively, the young players continue to play at a level that suggests future stardom. Quarterback Brian Lewerke showed off some impressive speed and a cutback that would have made a running back jealous on a 61-yard touchdown run in the first half that opened the scoring. Wide receiver Darrell Stewart Jr. may not have been that surprised, however.

“What people don’t understand about Brian Lewerke, is he’s white lightning,” Stewart said. “He has a great arm, but he’s got great legs too.”

Stewart Jr. had his second consecutive week with a near-touchdown, taking a jet sweep for 46 yards all the way to the one-yard line before Lewerke punched in his second rushing touchdown of the day.

Of course, Lewerke will continue to be up-and-down throughout his first few starts. He missed a handful of easy screen throws that made fans scratch their heads in disbelief. His decision-making seemed smart outside of the interception he threw, a deep ball to Felton Davis III that felt like a mistake out of the hand, picked off by the excellent Darius Phillips, who really should be receiving NFL attention.

Lewerke was the subject of quite a bit of media speculation heading into 2017. After seeing confident quarterback play for most of the last six years under Dantonio, 2016 was a season to forget for the passing offense. However, Lewerke has taken the promise he showed in flashes last year and turned himself into a quarterback that can make plays downfield, something that very few seniors can do, let alone a redshirt sophomore controlling the offense in just his sixth college game.

Lewerke and Stewart have been among the main standouts on offense, as the young offensive line has created holes in the running game behind sophomores Cole Chewins and Tyler Higby, as well as redshirt freshman Luke Campbell.

LJ Scott has been producing as one of the featured running backs. His 44-yard run on a late fourth down set up a fourth-quarter touchdown to make the game 28-7. Scott had another touchdown through the air to end up with 86 yards rushing, 25 receiving and two touchdowns. Not eye-popping, but Scott has been as effective as advertised despite the fumbles last week.

“I just knew coming into this game, as far as individually, I knew I was going to have to step up and bounce back for the team,” Scott said. “Obviously those two fumbles cost us. Those points basically all came from me. It’s about how I bounce back and try to forget about it.”

The offense is still on a wait-and-see basis, as the first real test will come in two weeks in a prime-time matchup with Notre Dame. For as much success as Lewerke, Scott, and Stewart have had, outside of Phillips, MSU haven’t really faced any elite defensive talent.

Head coach Mark Dantonio noted that the defense is playing close to 20 players, including plenty of underclassmen. Williams, Mike Panasiuk and Kenny Willekes have created solid pressure up front, and the run defense has kept both teams under 120 yards against two offenses that love to run the ball.

Perhaps the most impressive of those underclassmen on defense has been true freshman cornerback Josiah Scott. The newest Scott to make himself known to Spartan fans picked up his first career interception on the first drive of the game, picking off an ineffective Jon Wassink to set the tone defensively.

“We trust each other more,” Scott noted. “You have to trust yourself, trust your teammates, and trust your job. I feel like it’s going to work out for us.”

After two games last year, MSU was still considered a good team, but had plenty of underlying reasons to doubt their true ability. As it turned out, MSU didn’t have the ability to keep up with almost any Big Ten teams. Similarly, these two games from 2017 do not suggest MSU will end up as a top-25 team, but it must be said that there are significant signs of improvement from this team.

A win against Notre Dame would leave the Spartans feeling as if they can compete in the Big Ten East, despite the triumvirate of Michigan, Penn State and Ohio State staring them in the face. What’s more, a large portion of the Spartan contributors this year have the potential to be mainstays in the starting lineup for at least next year, if not in 2019.