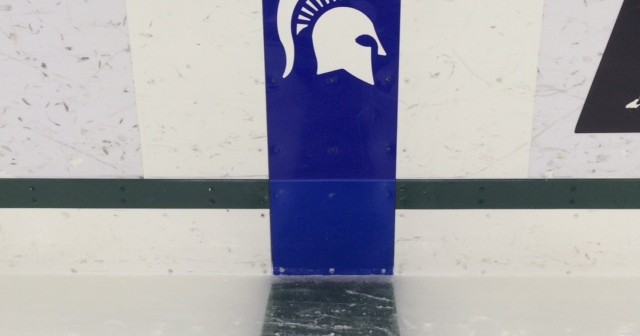 Michigan State hockey coach Danton Cole has picked up two commits for the future of his program.

Kevin Lombardi and Calvin Dybicz both committed to the Spartans on Tuesday and are poised to come to East Lansing in 2018 and 2019, respectively.

Lombardi is a 6-foot-5, 215 pound forward from Schwenksville, Pa. currently playing with Northwood School in Lake Placid, N.Y. Northwood has been known as a solid hockey prep school in recent years with Providence College picking up a few commitments from recently. Northwood plays a rigorous 40-50 game schedule that includes games and tournaments in both the United States and Canada.

Lombardi, according to Elite Prospects.com had only six points (3G, 3A) in 22 games with Northwood last season. However, these stats are misleading because only a portion of Northwood’s games are presented. With Lombardi turning 19 this August, odds are likely he will play with the Cedar Rapids RoughRiders of the United States Hockey League before coming to East Lansing.

Dybicz is a 6-foot, 180 pound defenseman out of Elk Grove Village, Ill. Dybicz has been playing with the Milwaukee Junior Admirals U-16 team and has garnered 31 points (6G, 25A) in two seasons. Dybicz was also called up late in the season by the RoughRiders for five games in which he managed to notch one assist and two penalty minutes.

Having just turned 17, there is a chance that Dybicz will make the jump to the USHL next season and play with Lombardi in Cedar Rapids. Though he may need a little more time to grow and develop, he could turn into a strong player on the Michigan State blue line.

With the addition of Lombardi and Dybicz, Michigan State’s recruiting classes go into a little flux. Lombardi is the fifth forward in the 2018 class which would put MSU at 19 forwards if they were all to come in a year from now. Currently, it is unclear if one or more of those will be held back or decommit as Cole and his staff attempt to sort out the classes.

Dybicz is in a bit more stable situation. He is the second defensman committed for the 2019 class, which would be replacing Zach Osburn and Jerad Rosburg on the back end. That would still leave the Spartans with nine defensmen for the 2019-20 campaign, most teams usually have eight.

With the addition of Lombardi and Dybicz, and with Cole and his staff still hot on the recruiting trail, it remains to be seen exactly how the 2018 and 2019 classes shape.

Michigan State opens their season on Oct. 7 against Toronto.