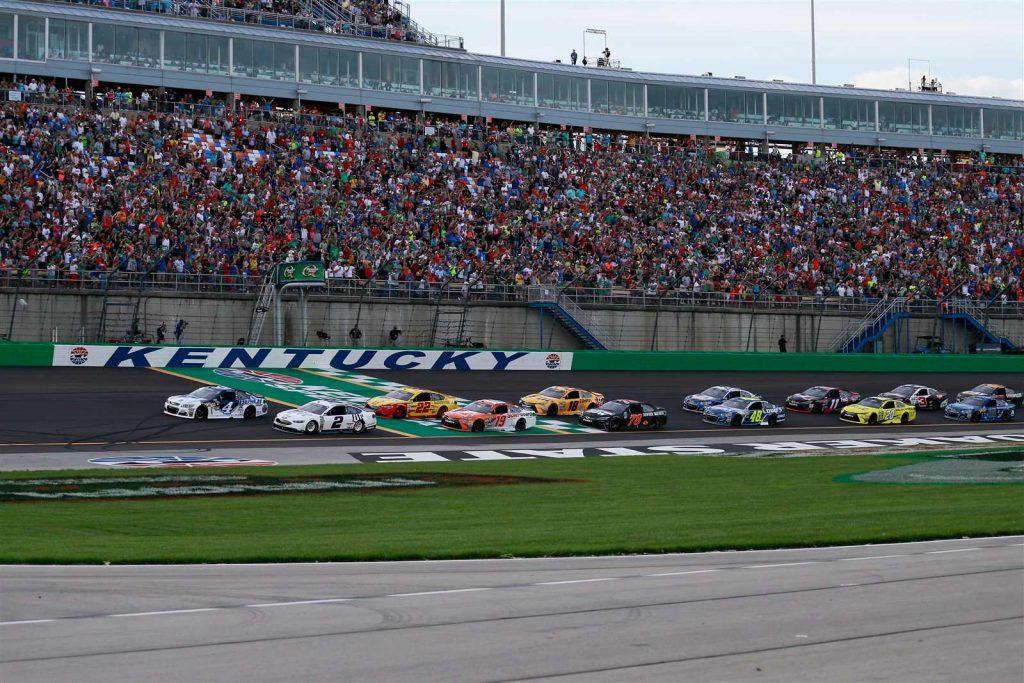 After a weekend on the high-banks of Daytona International Speedway, NASCAR travels to Kentucky Speedway in the bluegrass state for the Quaker State 400. The weekend is a tripleheader for the Monster Energy NASCAR Cup, XFINITY and Camping World Truck Series.

Brad Keselowski stretched the fuel in his No. 2 Ford just enough to cross the finish line in first place. The win at Kentucky was his third at the track since it came onto the MENCS schedule in 2011, his second consecutive in the 2016 season his fourth last year as well. He made the last tank of fuel last 71 laps and held off Carl Edwards en route to victory lane.

THE LINEUP
In an abbreviated session that saw round three cancelled due to impending rain, Kyle Busch won the pole for Saturday night’s event, laying down a fast lap of 190.282 mph (28.379 seconds), a new track record, around the 1.5-mile track. The pole was his third of the season, second at Kentucky and 22nd overall of his career.

Rounding out the top 10 starters are Martin Truex Jr., Matt Kenseth, Jamie McMurray, Denny Hamlin, Ryan Blaney, Kevin Harvick, Jimmie Johnson, Daniel Suarez and Brad Keselowski. Some other notable starters include Joey Logano in 11th, Chase Elliott in 12th, Dale Earnhardt Jr. in 13th and Kyle Larson dead last in 40th. Larson’s No. 42 Chevrolet did not get through pre-qualifying inspection in time to lay down a lap, so they will start in the rear of the field.

BRAD’S HOUSE
Brad Keselowski has owned Kentucky Speedway as of late, and has shown no signs of slowing down in terms of his dominance. Since the first Cup race in 2011, Keselowski has three wins, three top fives and five top 10’s. He has also amassed one pole and led 483 laps in his career at the 1.5-mile Sparta, Ky. track. His average finish of 8.2 is also third-best on the circuit. The No. 2 Team Penske squad could use a victory after a stretch in the early summer months that hasn’t been kind to them. In his last six races, he has two top fives but also four finishes outside the top 15, including three instances where he has failed to finish (Daytona, Charlotte and Dover).

If anybody is going to dethrone Keselowski,  it’s his rival, Kyle Busch. 1.5-mile masters Martin Truex Jr. and Kevin Harvick are solid bets as well. Busch has two wins at Kentucky (2011 and 2015), as well as four top fives and four top 10’s. His average finish of 5.2 and driver rating of 125.6 are both best in the series and he has never finished below 12th.

Truex Jr. has eleven stage wins, far and away more than anyone else, this season and has three top 10 finishes at Kentucky. Harvick has four top 10 finishes and would like a win more than almost anyone. Kentucky marks one of three tracks that Harvick has never won at in his career. Harvick also won the pole and led the most laps in this race one year ago and holds the best driver rating on intermediate (1.5-mile) tracks in the past 29 races.

IS THIS THE WEEK?

Kyle Busch, Matt Kenseth, Daniel Suarez, Clint Bowyer, Erik Jones, Chase Elliott, Denny Hamlin, Kasey Kahne, Jamie McMurray and Dale Earnhardt Jr. I say it every week, it seems like, but what do those names have in common? They have yet to visit the winner’s circle in 2017.

Kentucky, New Hampshire, Indianapolis, Pocono, Watkins Glen, Michigan, Bristol, Darlington and Richmond are the upcoming tracks before the regular season ends. Busch has won at all those tracks, excluding Pocono, Hamlin has won at all of them, excluding Kentucky and Indianapolis, and Earnhardt Jr. has won at three of them. So it’s not like these drivers can’t win. They can—and will. It’s just a matter of how many will win, and when they will win.

SILLY SEASON HEATING UP
Matt Kenseth made some shockwaves in the NASCAR world on Friday morning in his media availability, saying he will not be back with Joe Gibbs Racing after the 2017 season concludes.

“I’m not really worried about it. As of now, I don’t have a job for next year,” Kenseth told the media from Kentucky Speedway. “It’s not been a good year at all. […] I don’t think I will have the option to race at JGR next year, unfortunately.”

The unofficial announcement means that the No. 20 car will most likely have an opening available. The most likely scenario would put Erik Jones in the seat, who currently drives for Furniture Row Racing in the No. 77 Toyota, a satellite team of JGR. Jones also drives, and has driven, for Joe Gibbs Racing in the XFINITY Series for the past couple seasons.

With Dale Earnhardt Jr. retiring at season’s end, it also leaves the No. 88 at Hendrick Motorsports to be filled. Alex Bowman and William Byron are the two who have been thought to be options to fill the seat. But with Byron’s performance in the NXS dazzling everyone (he has won two straight races), he might be ready for Cup sooner rather than later.

Could Kenseth drive the No. 88 for one season while Byron matures more in XFINITY, and then he slots into the No. 88 in 2019? Perhaps. What about Ryan Blaney? Would he move to the mothership and start a third team for Roger Penske in the No. 12? That’s a possibility—and would leave an opening with Wood Brothers Racing. Darrell Wallace Jr. could possibly fill that seat, as he has ties to Ford. What about the No. 43 for Richard Petty Motorsports? Aric Almirola is still out with a back injury, but he could be out (and the team could be done) after 2017.

There have been reports of Danica Patrick hanging up her helmet after this season ends, which would leave another opening in the No. 10 stable at Stewart-Haas Racing. Who would fill that? Where would the other young guns such as Christopher Bell, Chase Briscoe and others go? Would Justin Allgaier or Elliott Sadler consider a Cup comeback? This all remains to be seen. Silly Season is just beginning … and it’s primed to be one of the silliest in recent memory.

ENCUMBERED WINS MATTER
If the regular season ended today, Joey Logano would be out of the NASCAR playoffs, despite winning a race at Richmond International Raceway earlier this season in his No. 22 Ford.

That’s because that win was labeled as encumbered. The No. 22 failed post-race inspection and did not receive credit for the race victory. In the history books, Logano will remain the winner. But the five playoff points and guaranteed playoff berth disappeared. He has yet to win again this season, and if he doesn’t soon, it could come back to bite Logano in the behind.

He sits three points behind Matt Kenseth for the 16th and final spot in the playoff standings. Erik Jones, Daniel Suarez and Trevor Bayne are also behind Logano, but are over 50 points back of Kenseth. A win for Logano before the regular season ends in nine weeks will make this whole conversation moot. But until then, the word “encumbered” will be beaten to death.

PREDICTION
As stated this week on Victory Lane, I really do think this is the week that Joe Gibbs Racing finds victory lane. I’m

going with Kyle Busch to win his first race of the season (first since Indianapolis, 2016) and all but officially clinch his playoff spot. It’s time, Kyle. Now, deliver.

Christopher Bell won the Buckle Up Your Truck 225 on Thursday evening after a three-hour rain delay. The win was his third of the season, all coming on 1.5-mile tracks.
The Alsco 300 on Friday evening was postponed until noon ET on Saturday due to an impending rainstorm. Kyle Busch will start on the pole for that event.