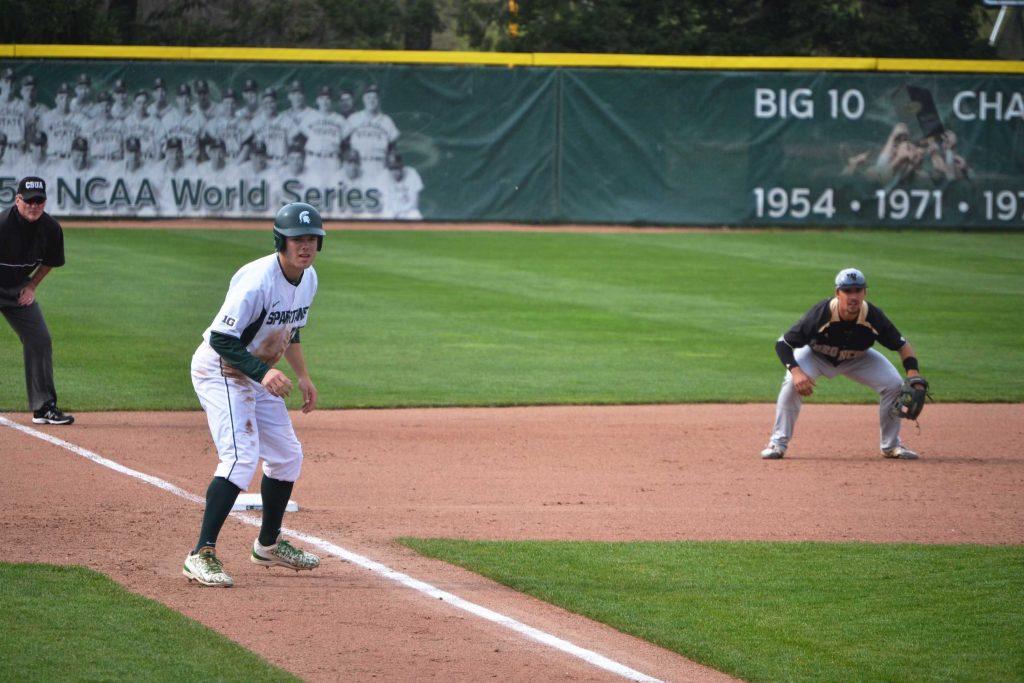 After a 12-day layoff, B1G baseball returned to McLane Baseball Stadium Friday afternoon.  Michigan State opened up a three-game set against Ohio State, attempting to bounce back from a non-conference loss earlier in the week to Notre Dame. Spartans sent their lefty ace, Alex Troop to the mound making his ninth start of the season. He was sent to clean up a spotty home record, and he did just that, as Spartans took the opener, 2-0.

Many thought Kobs Field would not be ready for the weekend series after last week’s flooding of the Red Cedar river. Coach Jake Boss Jr. was amongst those who were extremely pleased with the conditions.

“Field is beautiful. Grounds keepers did a tremendous job working almost around the clock to get it ready,” he said.

The Buckeyes and Jalen Washington jumped on Troop early, roping a double down the left field line. A sacrifice advanced Washington to third, just a few pitches into the game. With a groundout and a man caught stealing, the Buckeyes left one man stranded and were unable to score a run.

Spartans recorded their first hit in the bottom of the third, with a Royce Ando double to right center.  Dan Chmielewski flied out to right field, advancing Ando to third. Danny Gleaves grounded out to third, and Buckeyes threw out Ando, who was attempting to score. Bryce Kelley tattooed a ball off the wall, just under the 385’ mark in right center. His triple plated Gleaves, the game’s first run, and gave Troop a 1-0 lead heading into the fourth.

Ando lined a two out, run scoring double off the wall in left, just missing a home run by a few feet. His double scored catcher Matt Byars, and doubled the lead to 2-0 after the fourth.

Last Buckeyes scoring threat ended after a pop up by catcher Jacob Barnwell, stranding runners on second and third.

Both ball clubs struggled to get the big hit, as they went a combined 1-of-18 with runners in scoring position.

Ranking first in the conference, and 40th in the NCAA in ERA, Troop (5-2) looked every part of it once he settled in. Despite his command struggles, tying his season high four walks, his 1.69 ERA entering the contest stood well against the Buckeyes, not allowing a run in six innings of work.

“Change up was the best it’s been all year, fastball lacked a little command but the change up picked me up,” Troop said about how his command faired in Friday’s match up.

He also described how it felt playing at home after a lengthy break.

“It’s always great to play at home,” he said. “We really wanted to turn things around this week and have a really good performance in front of everybody.”

Jake Lowery and Joe Mockbee contributed to the combined shut out, with Mockbee picking up his first save of the season.

“Our pitching has been really, really good, Alex [Troop] got deep into the game and turned it over to a strong bullpen,” Boss Jr. said on his team’s pitching efforts.