MSU Bounces Back Against Oakland Behind Ward’s 25 Points 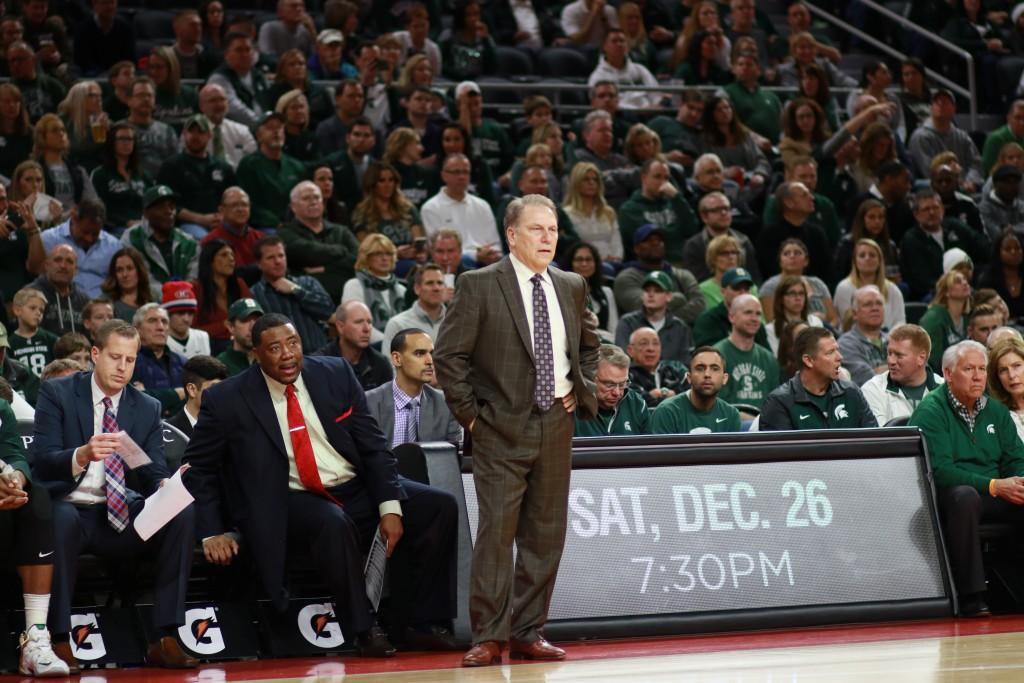 EAST LANSING, Mich.– Michigan State was able to come back with a win over Oakland 77-65, after Sunday’s stunning loss at home to Northeastern. The Spartans were led by freshman Nick Ward’s 25 points and nine rebounds, and Eron Harris’s additional 15 points.

MSU was desperate for a win after struggling recently against teams that the Spartans were expected to beat by a large margin. This 12 point win is a step in the right direction, as State improves to 8-5 heading into conference play.

The first half had ups and downs for the Spartans. Every time the team went on a run, Oakland seemed to have an answer. The largest lead during the half was an eight point lead with 8:29 left in the half. Missed opportunities and careless passes allowed the Grizzlies to cut into the Michigan State lead multiple times, before eventually bringing their deficit down to three by the end of the half; 13 of Oakland’s points off of Michigan State’s 12 turnovers.

Oakland had to deal with a plague of fouls both on and off the ball. At the end of the first half, three Grizzlies had three fouls, including leading scorer Stevie Clark. Just four minutes into the second half, two players had four fouls. At the 7:46 mark, starting forward Jaylen Hayes fouled out with 11 points and two rebounds. Three more players followed before the game ended for a total of four Grizzlies fouling out.

To kick off the second half, Kyle Ahrens came out with six quick points while Cassius Winston added on an additional five. Despite this opening burst, Oakland was once again able to pull back within four points.

The home crowd never got into the game until freshman Nick Ward blocked a Sherron Dorsey-Walker shot with 7:31 left in the game. This was a major momentum shift, and the Spartans forced a couple of quick turnovers that they were able capitalize on, taking a 13 point lead with five minutes remaining.

With Hayes fouling out, he was only able to play for 12 minutes. According to Oakland coach Greg Kampe, that was the difference.

“If he played 40, he probably would have had 36 points,” Kampe said. “It was pretty evident [Michigan State] couldn’t guard him. I mean our offense runs through him… They were struggling to guard him and he had 11 points… He’s got to be smarter.”

Nick Ward had his first start in another lineup change by Tom Izzo. The team is still trying to find what works best, and how it can be more effective.

Asked if the changing lineups were affecting the team, freshman Joshua Langford said, “It possibly could have, but we’re a team and we’re just going to come out and play Spartan basketball for 40 minutes, and that’s what we did. We had sometimes where we messed up but… overall we gave 100 percent I feel.”

Ward has been receiving more playing time, and that has been paying off as the freshman has scored in double digits in each of the past seven games.

“[Nick’s] an enigma,” Izzo said. ”He was just never able to do the things he’s able to do now, he’s just starting to figure out what he can do… But he’s getting better.”

With Ward improving each game, he has been able to fill part of the gap left from the absence of Miles Bridges.

This upcoming week will provide a few days of rest for the players before traveling out to Minnesota to face the Golden Gophers on Tuesday to open Big Ten play at 9:00 p.m. ET.