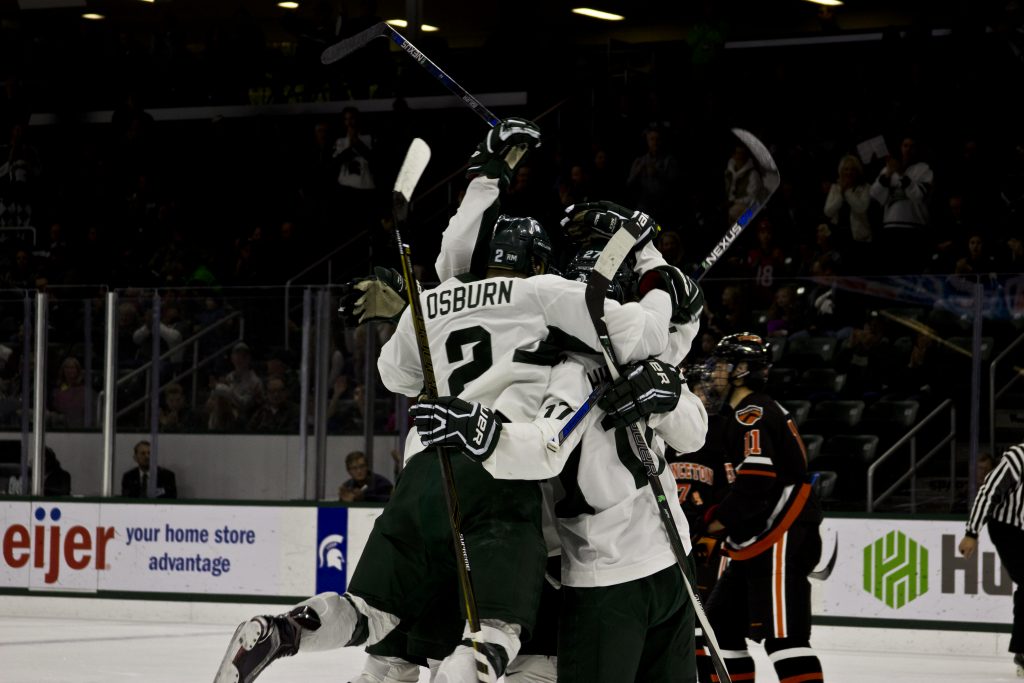 Michigan State only managed three shots on goal in the first period against North Dakota. But two of them found the back of the net.

The Spartans upset the No. 5 Fighting Hawks in Grand Forks on Friday night in their biggest win of the season.

In the second period, the Spartans came out flying, outshooting North Dakota 14-6. The Fighting Hawks continued to be hampered by penalties, they took eight over the course of the game, and the Spartans made them pay.

Senior Connor Wood extended the Spartan lead to 3-1 at the 7:34 mark of the second. MSU had several more prime scoring opportunities in the frame, but could not beat North Dakota goaltender Cam Johnson.

Michigan State captain Joe Cox connected on MSU’s second power-play goal of the evening to extend the lead to 4-1 just over two minutes into the third.

Things got interesting when Mason Appleton took a five-minute major penalty for head contact and a ten minute game misconduct. North Dakota negated the power play by taking a tripping call, but UND would not be dissuaded from climbing back.

Freshman Tyson Jost brought the Hawks within one on two goals 31 seconds apart to make it 4-3 with a little over ten minutes to play.

Like the Spartans of antiquity, Ed Minney and Michigan State closed ranks and held off the final onslaught. MSU secured the 4-3 win and Minney made 30 saves to collect his third win of the season.

The 4-3 upset marks the first win against North Dakota since 2008 and the first Spartan win in Grand Forks since 1979. The Spartans are now 4-6-0 on the season, and have won two straight games.

Michigan State will go for the series sweep tomorrow at 8:07 p.m. EST.