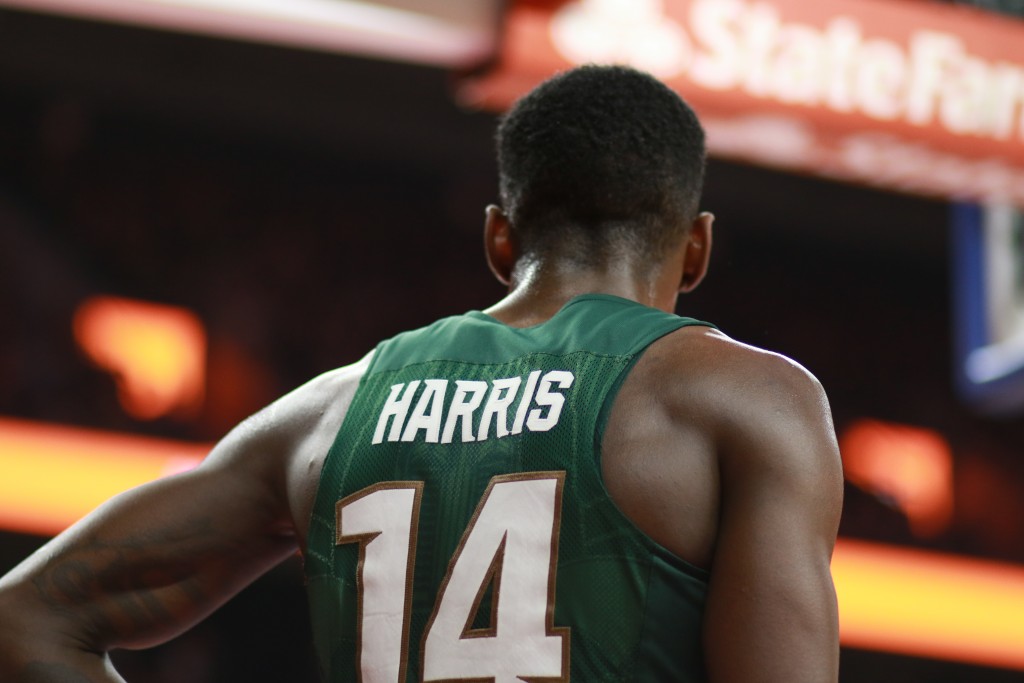 No one thought Florida Gulf Coast would walk into the Breslin Center and have a chance to win the game, but they did.

Down 78-77 with just over two seconds left, the Eagles (1-3) attempted to inbound the ball. Freshman Miles Bridges swatted the first throw out of bounds, bringing the clock down to 1.6 seconds. The second throw was successful but the Eagles could not get the shot off in time due to the clock starting too soon. By the time Antravious Simmons could catch the ball, the buzzer sounded and No. 13 MSU (2-2) escaped with the win.

“A timing error occurred with 1.6 seconds remaining on the game clock,” said official Bo Boroski. “Since a timing error occurred, we are able to utilize the replay monitor. A stopwatch was used to determine if any time should remain on the game clock. Using a stopwatch, it was determined the ball was caught and released in 1.3 seconds, meaning if the shot would have gone in, it would have counted. After the miss there was no time remaining in the game, therefore ending the game. By rule the possession can not be replayed. Period.”

FGCU big man Simmons was a nightmare down low for the Eagles. Kenny Goins was no match and Nick Ward even struggled defensively. Simmons finished with 18 points and 12 rebounds. FGCU as a team outrebounded MSU 41-29 and had 15 more second-chance points.

“We made Simmons into an All-American tonight,” said Izzo.

With under a minute to play, Bridges broke the tie and gave the Spartans a two-point edge, 75-73. The Izzone was rocking, trying to will MSU to a defensive stop, but Zach Johnson of FGCU threw down a monster dunk to tie the game once again. Coach Izzo called timeout with 22.8 seconds left.

On the ensuing inbounds pass, Brandon Goodwin quickly fouled freshman Cassius Winston and sent him to the line, where the normally perfect shooter split his free throws.

“I really thought I was gonna make both of them,” Winston said. “I stepped to the line with a lot of confidence, I sunk the first one and I thought the second one was good too, missed it. I felt bad, I shouldn’t miss free throws, I shouldn’t miss any of them.”

A mad scrum followed the miss and Winston dove on the ball, and jump ball was called in favor of the Spartans. FGCU had to intentionally foul Bridges with 16.5 seconds left. He drained both from the charity stripe.

Christian Terrell took it to the rack on the next possession with three seconds left, cutting the lead to one, 78-77. FGCU was forced to foul Eron Harris, who had already missed three from the stripe throughout the game. He bricked both and the Eagles corralled the rebound and called timeout with 2.4 seconds left.

“It might have been a little bit of nerves,” said Harris. “But like I said that’s another thing I know I’m good at, that’s why when I missed them I was smiling. Players go through it but that’s no excuse and I’m mad at myself for that.”

Harris dominated the game, particularly in the first half, but had limited help from his teammates. He singlehandedly outscored the Eagles for nearly nine minutes to open the game and finished the half with 17 points. He led all scorers with 31 points on a perfect 6-6 from deep.

“I know what I can do and to be able to actually do it, to get back to myself feels great,” Harris said. “I’m just gonna keep my confidence up right now and let it carry over.”

Bridges struggled to find his rhythm for most of the night. It took him almost 17 minutes to make his first shot of the game, largely because the Eagle defense was zeroed in on him the entire time. He tallied 13 points on 4-12 shooting and grabbed seven rebounds.

Compounding MSU’s struggles inside was the absence of Goins. He played like a ghost, failing to score and only pulling down three rebounds. He also picked up three fouls and only played 17 minutes, forcing Matt Van Dyk into action. The Spartans desperately need Goins to step up in a big way if they want to have any chance in the Bahamas.

This matchup was the first game of the Battle 4 Atlantis. MSU will travel to the Bahamas to play in the tournament starting on Wednesday night, where they will face Chris Mullin’s St. John’s squad.