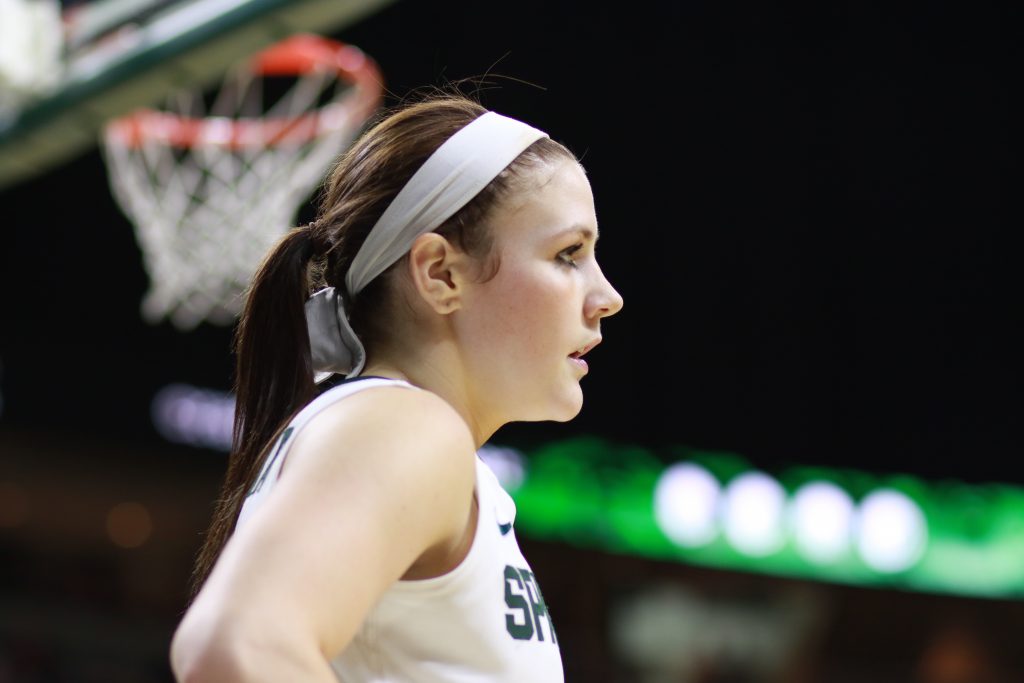 EAST LANSING, Mich. — Michigan State got off to a slow start against Northwood Sunday afternoon at the Breslin Center, but Big Ten preseason All-American Tori Jankoska gave the Spartans the spark they needed en route to an 82-47 win.

Jankoska led all scorers with 23 points in the game and sparked the Spartan offense early in the contest. The Green and White trailed 9-0 just four minutes into the game, but Jankoska nailed two straight 3-pointers to get the Spartans back in the game. She was efficient shooting the ball as well, shooting 60 percent from the field and 62.5 percent from beyond the arc.

“We had a tough time scoring in the beginning and that’s where I can pick it up,” Jankoska said. “I’m just out there doing whatever I can to help us win.”

Jankoska wasn’t the only Spartan to have a good day, as graduate transfer Taya Reimer and freshman Taryn McCutcheon filled the stat sheet. Reimer finished the game with eight points, seven rebounds and five blocks, while McCutcheon added eight points and 11 assists of her own.

“I’m so confident in being a true point guard because no matter where I pass it to, no matter who’s there, it’s a great player,” McCutcheon said. “It makes it easier for me.”

After the first four minutes of the game, MSU started to slow things down on offense and assert their dominance inside. The Spartans finished the game with 32 points in the paint.

“We were just sort of out there playing versus competing and that’s just what we talked about,” Spartan coach Suzy Merchant said. “I just talked about competing versus playing. Stepping up our defense, communicating and getting the ball inside and attacking.”

In the first quarter, MSU had a hard time defending their own paint, as 10 of Northwood’s 15 points came from inside this area. But as the game went along, the Spartans clamped down defensively. Northwood finished the game with 20 points in the paint.

“We were really soft in the paint,” Merchant said. “We didn’t really fight to get around anybody. You gotta give them credit. It’s their Super Bowl and we were a little bit flat, but after that timeout I thought we kinda got ourselves back where we needed to get.”

The Green and White came into this game with a huge size advantage, and they were able to dominate on the glass. MSU out-rebounded Northwood 41-30 in the game, and that is an area of the game MSU can continue to dominate throughout the season.

The Spartans will look to build on this win when they begin regular season play on Friday, Nov. 11 at home against the Davidson Wildcats. The game is set to start at 7 p.m.