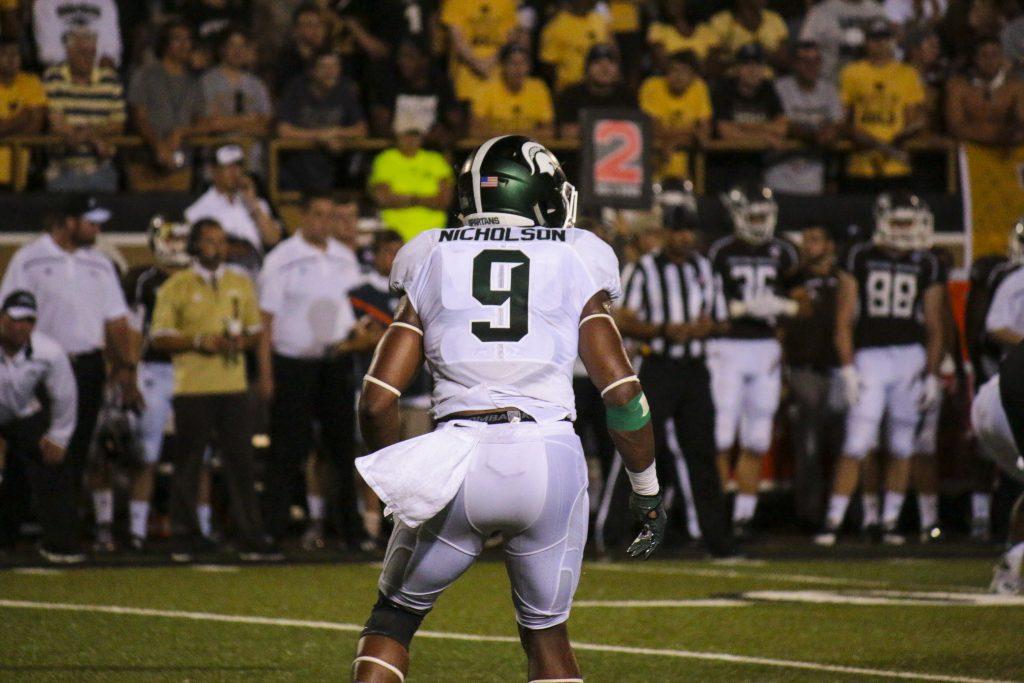 With a loss to No. 2 Michigan 32-23 last Saturday, Michigan State has now suffered a six-game losing skid for the first time since 1982. The Spartans are still winless in Big Ten play and haven’t won this year since beating then No. 18 Notre Dame on Sept. 17.

However, not all hope is lost. Despite the Spartans season long struggles, they will rebound with a big time statement in Urbana-Champaign, Ill. Not only will Michigan State (2-6, 0-5) defeat Illinois (2-6, 1-4), but they will post a sound and convincing victory. Here’s why:

1. Rejuvenating the ground game
Michigan State has only run the ball 96.5 yards per contest in their first four losses. But the Spartans have bounced back in a strong way by tallying 243.5 yards in their last two games, including 270 rushing yards against Maryland and 217 yards against No. 2 Michigan.

And it’s all thanks to the big boys up front. Leaders Kodi Kieler and Brian Allen have gotten plenty of help from Benny McGowan and Miguel Machado. Newcomer Tyler Higby has made quite the impact from left guard after replacing the struggling David Beedle. The collective unit is doing a great job of getting a solid push up front while restricting penalties.

This is opening up sizeable creases and holes for running back LJ Scott. After recording only one 100 yard rushing performance in the first six games, the sophomore has eclipsed the century mark in back-to-back games for the first time in his career.

A comeback like this, and the fact that Illinois is ranked 86th in rushing defense, spells trouble for the Fighting Illini.

2. Improving third down defense
Similar to boosting the rushing attack, MSU is quietly confronting a notable weakness and turning it into a strength by a comfortable margin.

Michigan State’s much needed improvement occurred in the Maryland game. The Spartans yielded 42 percent (5-of-12) on third down situations in their last two games after allowing their first four opponents in their current losing streak to convert 54 percent on third down.

Consistency has been the biggest key for this impressive turnaround. Montae Nicholson and Darian Hicks anchor a secondary that has drastically enhanced their coverage down field while standouts Riley Bullough, Chris Frey and Ed Davis are the leading playmakers in the tackling department.

Illinois is one of the least efficient third down teams in the country, as they have only converted on 30 percent. It’s safe to say that the Spartans should have a field day against the Illini.

3. Young players stepping up
There have been many underclassmen on both sides of the ball that have emerged into the spotlight and have delivered.

The most noteworthy offensive contributor is early enrollee Donnie Corley, who is the second leading wideout. Against Michigan, he recorded a touchdown reception late in the fourth quarter while another true freshman in Trishton Jackson hauled in two catches. Freshman quarterback Brian Lewerke, who is out for the rest of the year with a broken tibia, came into relieve Tyler O’Connor and Damion Terry and threw for 100 yards and a touchdown.

On the other side, the defense has a very bright future with a ton of raw potential. Freshman receiver Justin Layne converted to cornerback and posted a pick six against Northwestern. Raequan Williams had a key sack against Notre Dame and tallied two tackles last Saturday. And defensive end Josh King recorded three tackles in the loss to the Wolverines.

The sophomores have been just as reliable, with Tyson Smith making six tackles from defensive back. The sophomore hero trio of Grayson Miller (seven tackles), Matt Morrissey (two tackles) and Jalen Watts-Jackson (one tackle) were all involved with the improbable Michigan botched punt last season, also made their presence felt last weekend.

Expect these guys to take off the pressure from the veterans while their knowledge and confidence continues to grow.