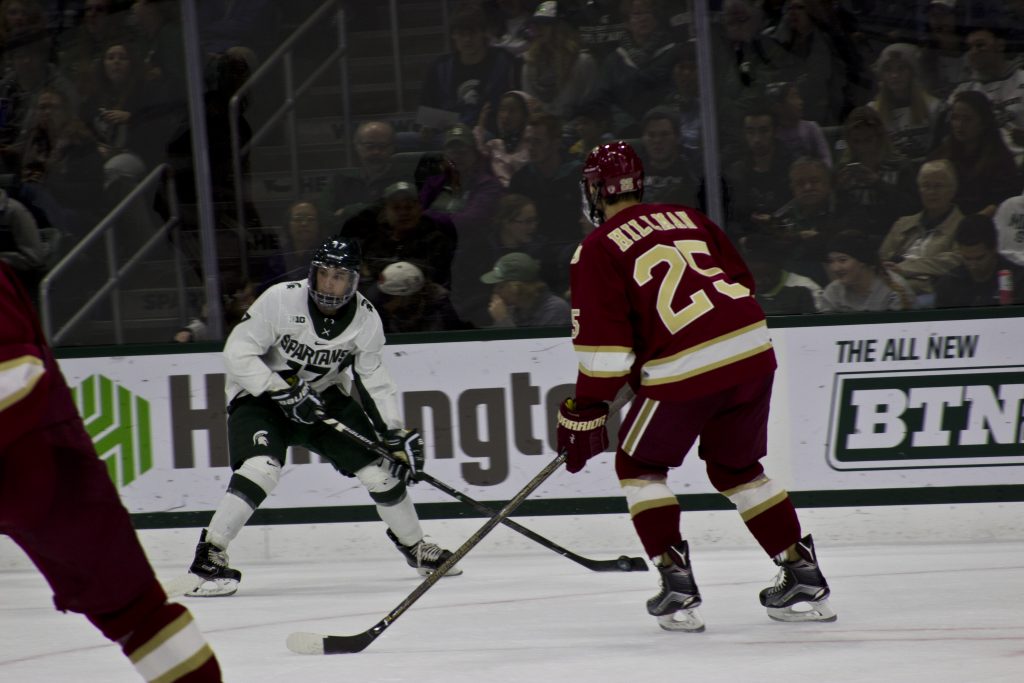 EAST LANSING, Mich. — Michigan State suffered a 3-1 defeat to No. 6 Denver at Munn Ice Arena on Saturday night in the second game of a back to back series.

The game got off to a slow start for the Spartans, as the Pioneers scored the game’s first two goals, with the first goal coming just four minutes and 51 seconds into the first period.

Denver’s first goal came when forward Troy Terry received the puck at the top of the circle, spun around and fired it in the bottom corner to beat MSU freshman goaltender John Lethemon.

Late in the first period, the Pioneers were able to net their second goal of the game, on a somewhat bizarre goal that was reviewed, but ultimately deemed to be a good goal, and Terry’s second of the day.

“He (Terry) came down on the wing, he had some space, it was just me one on one with him and I thought I had the angle and he beat me over my shoulder, and I didn’t know that it went in at first,” Lethemon said.

Terry nearly buried his third goal of the game early in the second period, on the Michigan State power play nonetheless, when he stole the puck from a Michigan State defender and had a one on one chance, but Lethemon was able to stop the scoring opportunity with a strong save.

The Spartans had six power play opportunities on the night, of which they went 0-6 and only managed three shots.

“Our power play was poor, and I thought we got frustrated too easily,” Spartan coach Tom Anastos said.

The Spartans defenseman were very careless with the puck and struggled to break it out of their own zone, and also had several turnovers at their own blue line. This lead to numerous Denver shorthanded scoring opportunities.

“We didn’t really work as a unit of five, and obviously on a power play you want to all be working together and that really wasn’t the case tonight,” sophomore forward Mason Appleton said.

At the second intermission, the score remained 2-0. The Pioneers outshot the Spartans nine to two in the second period, though the Spartans had many shots that either just missed wide or hit the post.

“I thought the fact that we missed the net so much, in that period, they had some blocked shots, we blew shots passed the net when we had open opportunities, we never gave ourselves any chances to build momentum,” Anastos said.

In the third period, Appleton was able to put the Spartans on the board with a shot from the slot that beat Jaillet in the left side of the net with 16 minutes remaining. The goal was assisted by freshman Patrick Khodorenko, and freshman Butrus Ghafari.

After a somewhat shaky start, Lethemon clearly became more comfortable in the net throughout the game, with strong showings in both the second and third periods.

“As the game kept going on, I got more and more confident, so I just kinda got settled into the game, got to make a few saves, so I was feeling pretty good.” Lethemon said.

The Spartans pulled their goaltender for an extra skater with around three minutes to go in the game, and had a number of decent scoring chances. However, a Michigan State turnover in the offensive zone lead to a Denver empty net goal with 1:04 remaining in the game.

The Spartans absolutely dominated the faceoff category for this match, beating the Pioneers 36-22.

Total shots had Denver notching 26, and the Spartans 20. With all the shots the Spartans had that were barely missed, hit the post, or were blocked, the Spartans will most likely feel good about the pressure that they were able to create.

The Spartans will look for their first victory of the season next weekend when they face Princeton on Oct. 28 for a 7:05 p.m. puck drop at home.