Spartans Show Improvement in 2-1 loss to No. 6 Denver 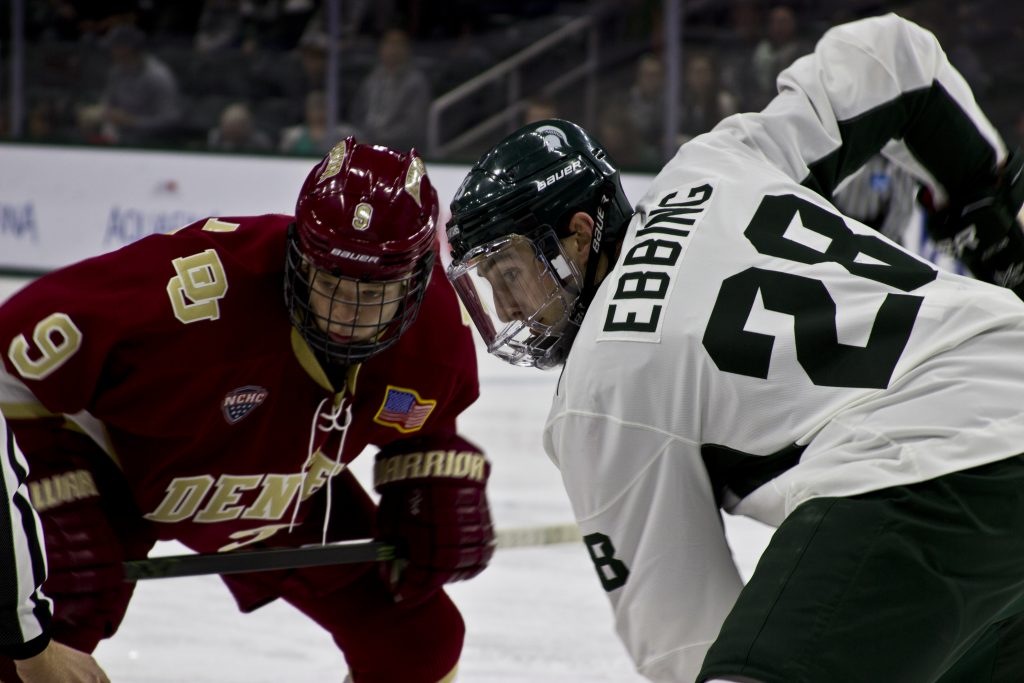 The Students took over Munn Arena Friday night as the Izzone and the A-Team joined forces to provide a loud and intense atmosphere as the Spartans hosted their home opener against No. 6 Denver.

They were treated to an epic hockey game, as the Spartans fell to the Pioneers by a score of 2-1.

“I thought we showed the ability to kinda rebound,” senior captain Joe Cox said. “Coming from last weekend I thought we played a lot better.”

The Spartans looked better in nearly every facet of the game. Their defense limited DU’s quality scoring opportunities, and junior netminder Ed Minney was on point making critical saves and limiting his rebounds.

“I felt great I was seeing the puck awesome, and I think overall I think our D did a way better job clearing out the front of the net and it’s a lot easier to stop the puck when you can see it,” Minney said.

After two scoreless periods, the Pioneers drew first blood as freshman centerman Henrik Borgstrom chased down the puck in the Spartan zone and unleashed a ripper of a shot near the bottom of the circle that went up and over the shoulder of Minney to make it 1-0 Denver.

MSU had a solid scoring chance a few minutes later, as Zach Osburn struck the crossbar from in close after deking a Pioneer defender out of his skates.

“I think their guy just bit a little too hard on me, so I pulled the puck to the middle and put it back on my forehand, took the shot and I think it hit his shoulder and then hit the crossbar,” Osburn said.

After a flurry of Spartan chances, Denver made it 2-0 as sophomore Jarid Lukosevicius took a shot through a Spartan defenseman that caught Minney off guard and wound up in the back of the net.

Despite the two goal deficit, MSU fought back and managed to draw a tripping call late in the game. With nine seconds left on the man advantage, and with the goaltender pulled, freshman Patrick Khodorenko got the puck on the far dot and rifled a shot into a wide open net.

Not only was it Khodorenko’s first of the year, but his goal ensured that the Spartan powerplay got on the board.

MSU fought feverishly to get the equaliser in the final minute but came up just short as the Pioneers escaped with a 2-1 victory.

Though there is no such thing as a good loss, this game represented a step in the right direction for the Spartans. Minney had a great bounceback game stopping 24-of-26 shots. The Spartan special teams were vastly improved with the powerplay going 1-for-4 and a perfect 4-for-4 on the penalty kill.

Overall, Michigan State just looked better organized and prepared in they way they played the game, and it showed on Friday night.

“I thought we played with so much more pace than we did a week ago, at least from a battle perspective,” Spartan coach Tom Anastos said.

Despite the loss, MSU showed a lot of people that there may be more to this team then previously thought.

“I think there was a lot to be encouraged about and this team, with as young as it is and inexperienced as it is moving ahead,” Anastos said.

The Spartans will close out their series with Denver on Saturday, faceoff is at 5:05 p.m.