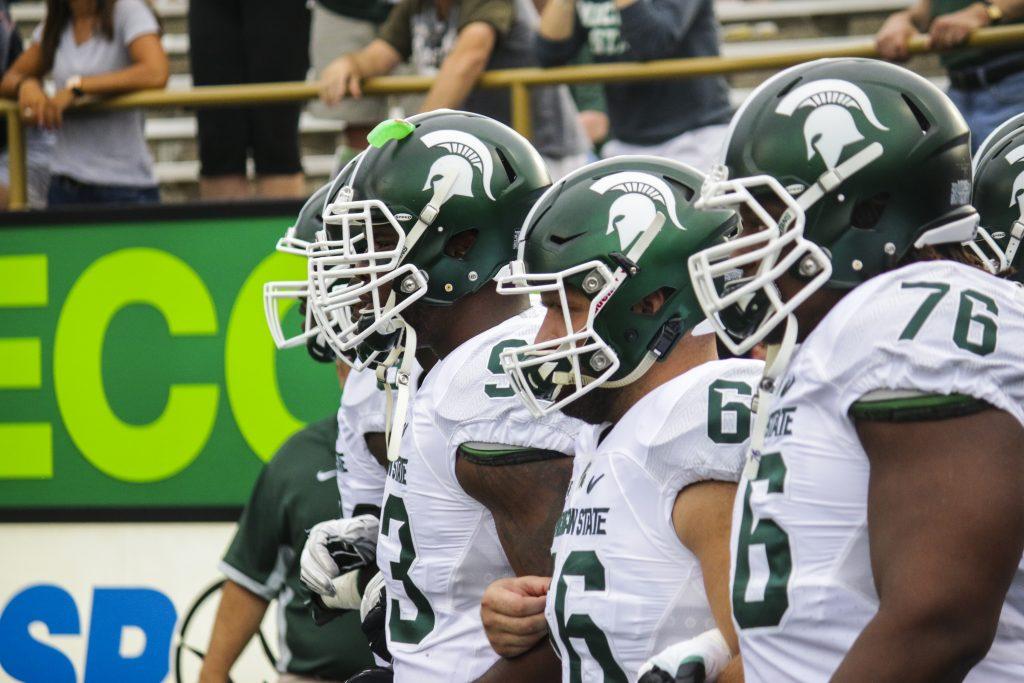 The Big Ten season is finally underway, and it will kick off with a bang as No. 11 Wisconsin Badgers will truck on over to East Lansing to face the No. 8 Michigan State.

Both Wisconsin and Michigan State have perfect resumes, with their eyes set on the Big Ten Championship Game in Indy. Emotions will be high as a kite in this one. What will the Spartans have to do to find their third win on the season?

This matchup will be won or lost on the line of scrimmage. The MSU offensive line is a major X-factor not just for Saturday’s game, but for the entire season. The line played a fantastic game against Notre Dame, and it came from unlikely sources. Sparty’s O-line is headlined by Brian Allen and Kodi Kieler, but it was Benny McGowan and Brandon Clemens who stole the show against the Irish.

Fullback Prescott Line also contributed to the effort up front against ND. This bulldozer of a man was a major reason why the Spartans racked up a whomping 260 yards on the ground last week. If Line, McGowan and Clemens play as well as they did against Notre Dame, there is no need to worry; the Spartans will run the ball all over the Badgers.

The defensive line also needs a strong game against Wisconsin. Year in and year out, Wisconsin always has an impressive ground attack. Sparty needs to counter that with the big men up front. As always, Malik McDowell will find a way to impact opposing offenses.

Demetrius Cooper will also play a large role, but watch out for redshirt freshman Raequan Williams. Dantonio spoke highly of this defensive tackle as one of the most improved players from Week 1. Expect Williams to make his mark against the Badgers as a key role in winning the skirmishes up front.

One of the best unheard rivalry’s will be back in session on Saturday. Michigan State will play host to Wisconsin for a top 15 matchup.

The biggest key for the Spartans will be to establish the running game with LJ Scott and Gerald Homes. Both backs are capable of getting 75 plus yards and at least one touchdown. They need to be able get to run the ball if the passing game wants to open up.

Tyler O’Connor has proven that he can be a game manager and not make mistakes. He has thrown a few interceptions this year, but his consistency has been huge for the offense. I would be shocked if he doesn’t take chances down the field, especially with the talent at the wide receiver positions.

As for the defensive side of the ball, it will come down to the front seven. They will need to be able to stop the running game and force the young Wisconsin quarterback to make throws against an experienced secondary. If the defense can make Wisconsin pass happy, then they will be able to make some plays and stop the offense.

Overall, both teams are experienced and have been here before. Both of the coaches will be well prepared for this game. However, coach Dantonio has yet to lose at home to Wisconsin, so I think the advantage is there for the Spartans.

After a four year break, the Spartans and Badgers are ready to return to action as No. 8 Michigan State hosts No. 11 Wisconsin on saturday at 12 ET on the Big Ten Network. MSU won the most recent meeting in 2012 in a 16-13 overtime thriller at Camp Randall Stadium.

Many question marks have disappeared while several impact players are on the rise after the Spartans impressive 36-28 victory over then-No. 18 Notre Dame.

Tyler O’Connor is finally cozy at quarterback and receiver Donnie Corley is embracing his star power in the spotlight.

For this top 15 showdown at Spartan Stadium, it will all come down to execution on special teams. Michigan State and Wisconsin have stacked defenses across the board, which should result in several three and outs and punting situations.

A huge yet underestimated component by many is dictating field position. It will be up to Spartan punter Jake Hartbarger and Badger punter Anthony Lotti to make it a hassle for the opposing offense by pinning them deep in their own territory.

It’s very likely that both squads will march into the red zone multiple times, but will have to settle for three. This game may be a battle of field goals between MSU’s Michael Geiger and UW’s Rafael Gaglianone.

Geiger has a wide range thanks to his strong power game but is extremely streaky. He has yet to make a field goal this season. Gaglianone is consistent and delivers in the clutch with his notable game-winning 47 yard field goal against then-No. 5 LSU.

I give Wisconsin the edge on special teams, but I think Michigan State will find a way to set the tone early. They will strike with a key turnover or O’Connor composing a sustainable drive, which will shape up big play opportunities down the road.