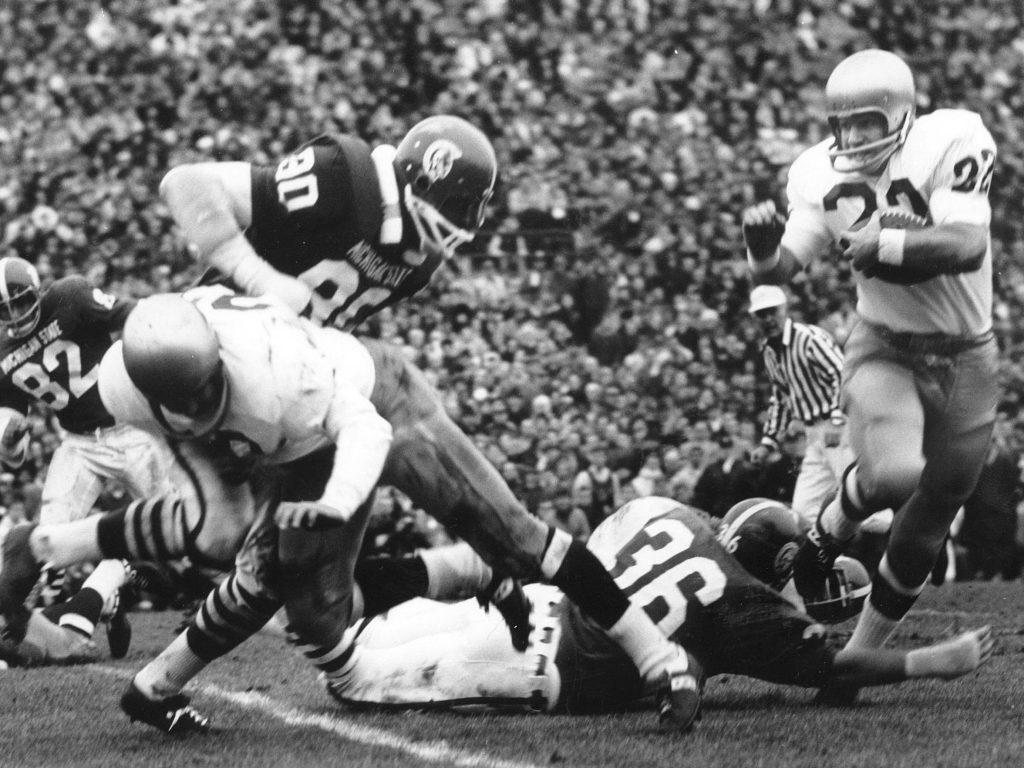 ﻿
This Saturday marks the 78th meeting between Michigan State and Notre Dame with the Irish leading the all-time series 48-28-1.

In previous years, this game has been about toughness, grit and determination. Notre Dame and Michigan State were cut from the same cloth. Two programs who loved to get down and dirty in the trenches.

The series began 119 years ago in 1897 making it one of the 27 oldest rivalries in college football. Since 1949, the winner has taken home the Megaphone Trophy, sponsored by the Detroit alumni clubs of both schools.

When the rivalry game first started the megaphone was painted half blue with a gold ND monogram, with the other half painted white with a green MSC. Over the years every result was painted on the megaphone. Now, the trophy is half blue and half green but the same passion and a level of respect is brought every time these two programs square off.

Also – this fall marks the 50th anniversary of the 10-10 tie between No.1 Notre Dame and No. 2 Michigan State on November 19th, 1966 in Spartan Stadium. The epic clash between the rivals swept across the country as the game is now referred to as “The Game of the Century.”

“This rivalry goes back to the ’66 game certainly and even maybe before that,” Dantonio said. “So it’s been a traditional-type rivalry and we’ve embraced that as we have so many of our other rivalries.”

The gentleman’s rivalry stretches deep into bloodlines. For senior captain Riley Bullough the Battle for the Megaphone has a personal connection.

“My grandpa has a huge part at Notre Dame. My mom went there. My uncle played there. So to be able to go down there and get a win against them in that environment, it would mean a lot,” Bullough said. “Growing up, we’d go to Notre Dame games and the next week come to a Michigan State game.”

Notre Dame clinched a 17-13 victory in 2013 — the last meeting between the Irish and the Spartans. The loss for the Spartans was the only defeat on the year. In hindsight the loss to Notre Dame knocked Michigan State out of the National Championship, or at least out of the discussion since Florida State and Auburn were undefeated as well.

The MSU senior captains were freshman then but now they share their wisdom for the young Spartans as they head into a hostile environment in South Bend.

“This is a huge game. I think they sort of understand it, but they don’t really fully understand the environment that we’re going to be in,” Bullough said. “I remember looking back at that game, Notre Dame was a physical, fast, violent team. Kind of the same things that we pride ourselves on, so we understand that. We need to do those things and we need to play our best football game to go down there and get a win.”

Despite entering Saturday night as the higher ranked team, the Spartans find themselves once again as underdogs.

The Irish have captured the Megaphone the past three meetings but Dantonio and the Spartans look to give the golden domers their second loss in 2016.

“We’ve got to press the issue. I don’t think there is any question about that,” Dantonio said. “And  we need to do what we do. We need to win the time of possession, win the turnover battle, convert on third down, and be effective when running the football.”

Quarterback play on both sides will be crucial as Notre Dame has two playmakers under center, while Tyler O’Connor will be going into his first game versus the Fighting Irish as the starting quarterback. An opportunity the senior captain is extremely eager for.

“Growing up, if any fan, I was a Notre Dame fan. But that obviously faded a long, long time ago,” O’Connor said. “It’s a rich tradition, Notre Dame has a great history. It’s something you dream about whether you were or weren’t a Notre Dame fan or liked or didn’t like Notre Dame. It’s a great atmosphere.”

With all eyes on the young Spartans, Michigan State welcomes the challenge head on.

“It’s a nationally covered game. It’s just a great opportunity to play in a great environment in front of the whole country,” O’Connor said. “Michigan State and Notre Dame, it’s always been a rivalry where everybody watches.”