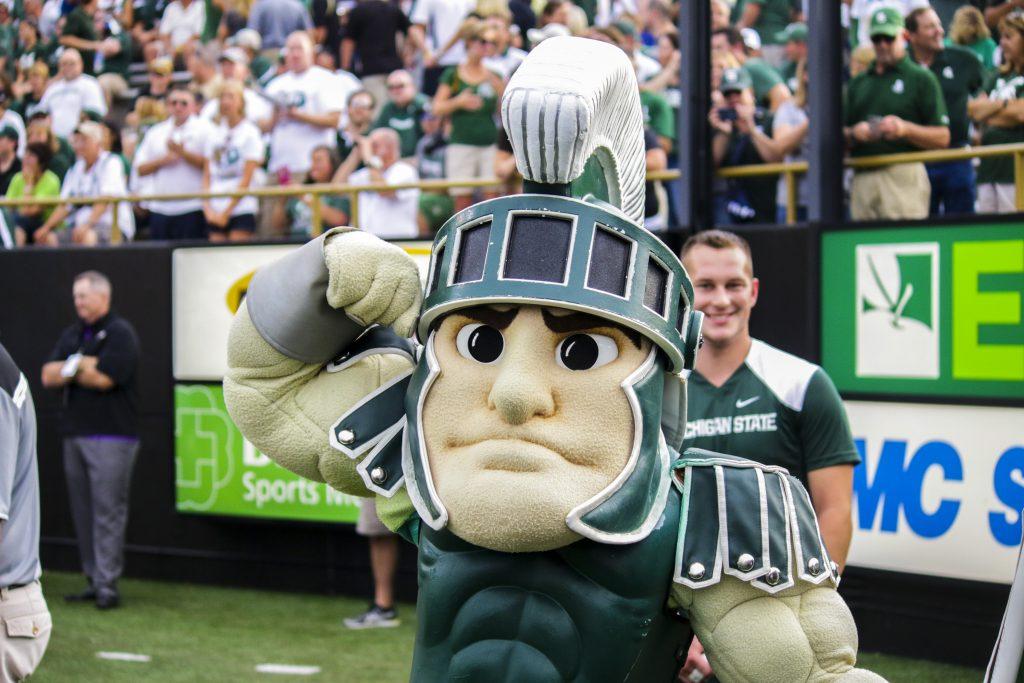 This showdown marks the 50th year anniversary of the “Game of the Century,” as No. 12 Michigan State (1-0) clashes with No. 18 Notre Dame (1-1) in South Bend on Saturday night. Despite the three year break, there has been no love lost between the rivals.

The Michigan State-Notre Dame series dates back to 1897, with the Irish leading the overall series at 48-28-1. The Spartans have won six of their last nine visits in South Bend since 1997, but have lost their last three at Notre Dame Stadium. MSU is currently on a three game skid.

Michigan State hopes to stop the bleeding by reclaiming the Megaphone Trophy for the first time since Little Giants in 2010.

After a vanilla approach in the season opener, be on the lookout for co-offensive coordinator Dave Warner to go all out with an aggressive play calling style this time around.

Quarterback Tyler O’Connor, who threw for 190 yards and three touchdowns against Furman, comes out of the gate with a gunslinger mentality. The captain will catch the short-handed Notre Dame secondary off guard by taking early medium and deep shots downfield with success.

Because of his versatility, coach Mark Dantonio will incorporate fake option pass plays for the mobile Ohioan which will cause the Irish defenders to be sucked out of position.

Expect the receiving senior trio of R.J. Shelton, Josiah Price and Monty Madaris to have their way with the vulnerable Irish defensive backfield.

O’Connor’s effective throwing ability will stretch out the Notre Dame defense, eventually forming holes for the running back trio. Be on the lookout for tailback LJ Scott alongside O’Connor to command the ground facet in the late stages of the game by running the option to perfection.

MSU has the clock on their side by moving the ball in a methodical like manner because of the balanced offense while keeping the stacked defense intervened and well rested on the sideline.

Speaking of the defense, the unit is able to hinder Notre Dame’s potent offense with a variety of blitz packages, causing the flustered quarterback DeShone Kizer to make ill-advised decisions. The Spartans also do a good job of containing Kizer with a quarterback spy and consistently force the Irish into third and long situations after pushing them back on first and second down.

In response to the Irish’s hurry-up offense, Dantonio will try to have as many fresh bodies on the field as possible by making substitutions on the front seven. With the return of linebacker Ed Davis, rotations should be no problem with a deep linebacker core. The veteran secondary will prevent the big plays downfield and also help out in run support. The Spartans just need to make sure that they call a timeout if there is confusion on the defense in order to restrict mental miscues from occurring.

On special teams, the Spartans have ole reliable R.J. Shelton fulfilling kickoff and punt return duties. The senior provides a huge spark with his soft hands and excellent vision.

Overall, Michigan State will enter this showdown fresh, healthy and improved thanks to taking advantage of the BYE week last weekend. The Spartans break their losing streak against the Irish with their stout defense forcing turnovers, prevailing under the illustrious Touchdown Jesus.

The penalty problems and sloppy offensive execution continue to haunt the Spartans.

The offensive line comes out too aggressive, as they do a nice job of protecting O’Connor and opening up running lanes, only to be negated by holding calls. This will greatly damage their confidence, especially if large gains are wiped out.

Warner tries to establish the ground game right off the bat. Aware of the inexperienced O’Connor, the Irish defense sniffs it out by heavily stacking the box. Notre Dame will try to make O’Connor win with his arm. He let’s the pressure get to him and underperforms in the spotlight.

MSU’s defensive backfield will be equally responsible for the penalty fest. Senior Darian Hicks  is drawing flags left and right, with his small size remaining a liability.

Fearing the deep ball, Hicks and Vayante Copeland will give targets Equanimeous St. Brown  and Torii Hunter Jr. a big cushion. The Irish will take advantage of the conservative strategy with their elusiveness.

The MSU blitzing scheme backfires with Notre Dame countering it with quick slant routes and wide receiver screens. Kizer at quarterback is one of the best in the nation and actively dictates the quick tempo offense, causing fatigue among the Spartan defensive line. Therefore, the Irish will be able to strike quickly for multiple scores with ease.

With a futile push on the line, the dual-threat junior will buy more than enough time and make the Spartan defense pay. Even with solid penetration from MSU, Kizer is one of the best in the business in creating on the fly with his legs and will find his man in stride or streaking downfield.

Notre Dame has a dangerous return man in C.J. Sanders, whose breakaway speed will impose a challenge for the Spartan coverage teams to contain and wrap up in the open field.

Under first year coach Mark Snyder, the Michigan State special teams unit was one of the worst in the country. They surrendered several huge returns and even a few touchdowns, as the players took poor angles in pursuit while experiencing suspect tackling.

Aside from the impressive performance against Furman, the special teams woes continue for MSU. They allow Sanders to spring free, setting up the Irish in favorable field position. The Irish will seize momentum with a short field. Even if Notre Dame can’t score a field goal on the possession, worst case scenario is pinning the Spartans deep into their own territory.

Spartan kicker Michael Geiger fails to deliver in the clutch by missing his must-need field goals. On the other hand, Justin Yoon is a reliable kicker for the Irish, who made 15-of-17 field goals last year and is 2-of-3 in 2016. He will tack on points if the Irish offense stalls in the red zone.

At the end of the day, the bye week turned out to be a curse as Michigan State is unable to overcome their rusty and poor play against a juggernaut offense. Notre Dame notches their fourth straight win in the rivalry with Kizer leading the way.