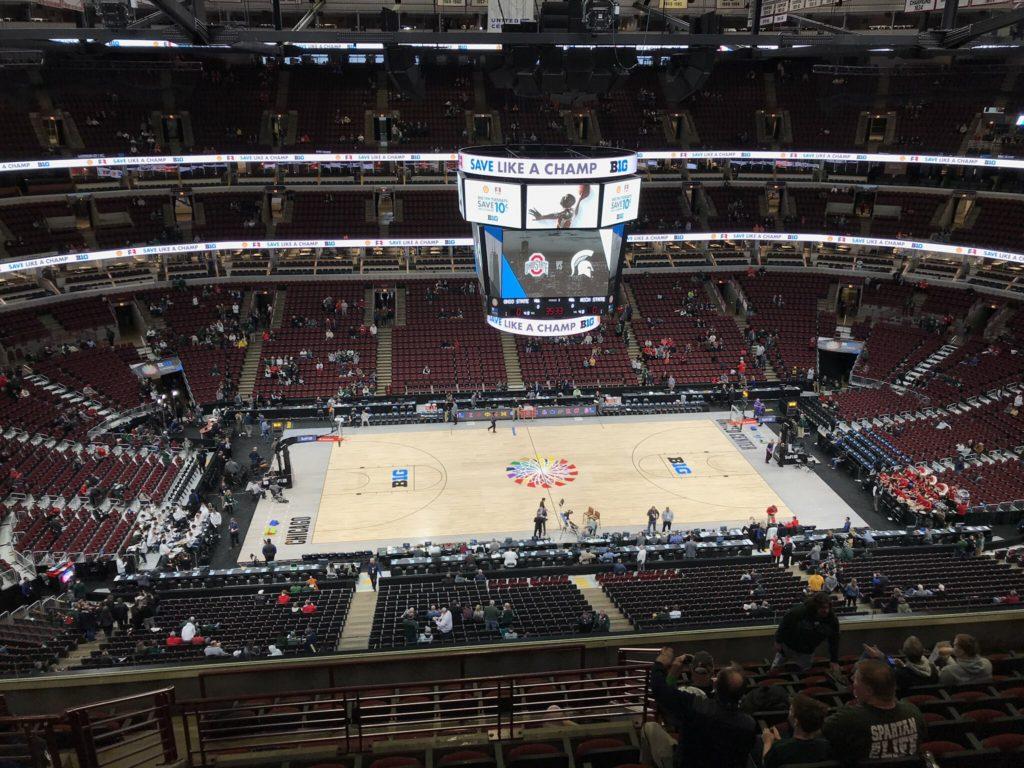 CHICAGO — Michigan State won their opening game of the Big Ten tournament over Ohio State, 77-70. Here are Kyle Turk’s immediate takeaways from Chicago.
Henry struggles early, Loyer best of freshmen
Foster Loyer hadn’t attempted more than two shots in a game since Feb. 9 against Minnesota. It took just eight minutes for him to change the game for Michigan State on Friday, hitting three 3-pointers in the first half while Cassius Winston committed three early turnovers.

His most impressive stretch came as the shot clock wound down and Ohio State held a 25-23 lead. He hit the most contested shot he’s seen all year and drew a third foul on OSU’s Keyshawn Woods in consecutive possessions to keep MSU in the game.

The upshot is simple. MSU head coach Tom Izzo knows that Winston won’t be at the right level next weekend if the Big Ten player of the year is forced to play 30-plus minutes in two (or three) straight games. If Loyer can continue to put forth positive performances with Winston off the court, it means that MSU’s best player could have more in the tank when they need him the most.

Aaron Henry missed his first two shots but continued to run in transition. His dunk with 8:25 left pushed the MSU lead to 14, and it took a late flurry against MSU’s backups for Ohio State to turn the score respectable. At this point in the season, it’ll be all about confidence for Henry. Staying active in the offense is absolutely necessary for someone with Henry’s talent, if for no other reason than to keep defenses honest.
Sluggish second-half start keeps it close
Izzo won’t be happy with the opening stages of the second half. MSU held a six-point lead at the half, but sloppy defense led to back-to-back 3-pointers from each of the Wesson brothers to briefly tie the game at 40. MSU started the second half just 1-of-5 from the field, but the momentum swung back their way courtesy of a flagrant foul on Kaleb Wesson and another Loyer 3-pointer that stretched the lead to five.

What was odd for MSU was the lack of defense on ball screens. Winston’s offensive play bled over into his defensive effort, and he and Xavier Tillman didn’t quite match the levels that had won them the No. 1 seed last Saturday against Michigan. Winston finished with 18 points on 4-of-7 shooting but had just five assists and four turnovers in 22 minutes. Tillman had first-half foul trouble on his way to just seven points and six rebounds. With Nick Ward returning against the Buckeyes (just eight points in 14 minutes), it wasn’t the same Tillman of weeks past.

How much of a rotation question it poses for Saturday’s semifinal remains to be seen, but this is not the point of the season for Tillman to backslide.
Ohio State and the NCAA tournament
With Thursday’s win over Indiana, the Buckeyes seem to have a decent shot at an at-large bid come Selection Sunday. But even at a projected 12-seed, are we sure Ohio State deserves a bid? Indiana is likely out, but someone could sneak an upset from another conference tournament and snag an automatic bid to bump OSU out.

With Kaleb Wesson in foul trouble (just seven points in 15 minutes), OSU head coach Chris Holtmann didn’t have anyone to turn to on the offensive end. Keyshawn Woods led Ohio State in scoring in both games but had been cold for most of the regular season. The late flurry from OSU at the end will benefit them in the eyes of the committee members who didn’t watch the game. Anyone who saw all 40 minutes would see a team with a dubious shot at avoiding the NIT.
Saturday’s outlook
With either Wisconsin or Nebraska set to play MSU tomorrow afternoon at 1 p.m., it looks likely that we’ll get a rematch of Feb. 12’s game in Madison – a 67-59 road win. The Badgers are 5-1 since that game, losing at Indiana in double-overtime, and will be playing for a shot to solidify a spot on the 4-seed line come Sunday.

MSU has a good matchup for the Badgers, but limiting the 3-pointer will be crucial. Guards D’Mitrik Trice and Brad Davison can get hot from outside and didn’t shoot well in Madison. Reverting to the mean could spell trouble for the Spartans.