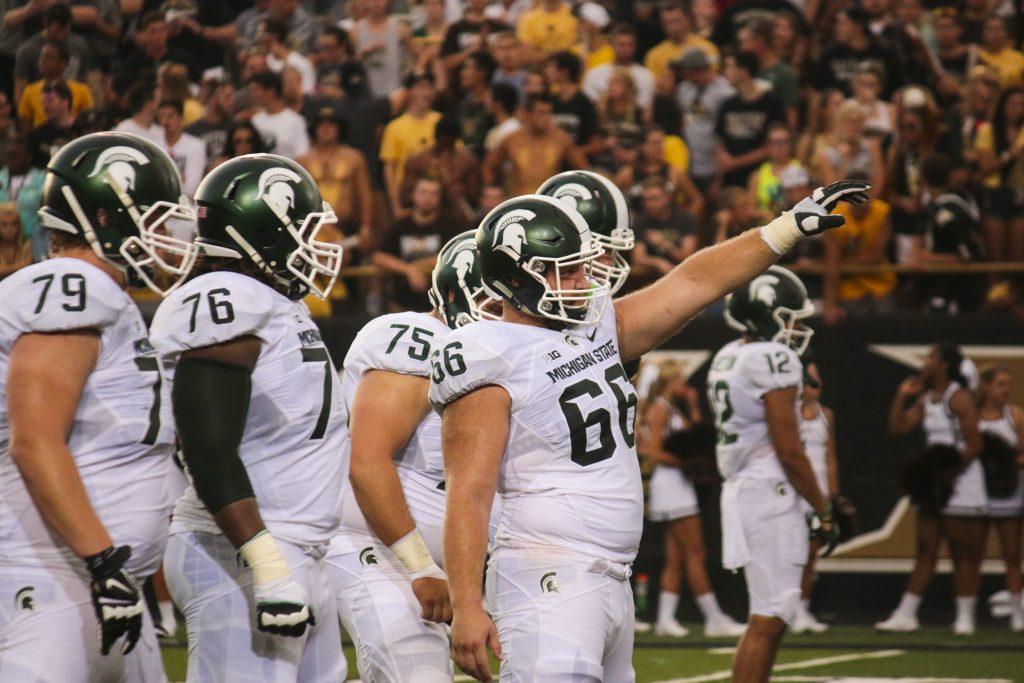 This is the fifth in a series of assessments on each position for Michigan State football. To read about the Spartan tight ends, click here.

In my opinion, the offensive line is the X-factor for Michigan State in 2016. There is no question that the Spartans must run the ball well to find themselves on top of the Big Ten for the second straight year. They have three of the most talented veteran backs in the nation, but a first-year starting quarterback with largely inexperienced wideouts. Luckily for the Spartans, there is not a team in the nation they will not be able to run the ball over if the big men up front play their parts.

There is no lack of talent on MSU’s front lines. Returning starter Kodi Kieler will lead the pack as he makes the shift from right tackle to center. Brian Allen will carry on the Allen family legacy as a second returning starter at left guard.

Sixth-year senior Brandon Clemons, who played in all but one game in 2015, will take over as the starting right guard. This likely leaves redshirt junior Dennis Finley at right tackle and redshirt sophomore David Beedle at left tackle. Seniors Miguel Machado and and Benny McGowan will provide much-needed leadership, experience and depth as they find their way into the rotation as nonstarters.

The good news is that Michigan State’s O-line has plenty of talent. Kieler provides a glimpse of resilience with his ability to strive in multiple positions and through injuries. Allen is every bit as talented as his brother Jack, if not more. Clemons has a great deal of experience at 23 years of age.

But then there is the bad news. In 2015, the Spartans took pride on having an offensive line that, when healthy, could obliterate anybody. Unfortunately for Sparty, this theory was blown to bits by Alabama. MSU’s line was merely decent in 2015, and will likely take a step back in 2016.

The Spartans have to cope with losing the eighth pick of the NFL draft, Jack Conklin. They also lost the 325-pound battleship Donovan Clark and the versatile Jack Allen. Can the Spartans rebound from losing these three starters? If the spring game gives us any indication of this question, the answer is no. However, perhaps when each starter plays on the same side, MSU’s offensive front will find a way to consistently get the job done.

This year’s edition of the offensive line is undoubtedly one of the biggest deal-breakers on the team. The Spartans only have two returning starters, yet there remains a bunch of raw potential. They will try to replace three studs on last year’s line, including two All-Americans, Jack Conklin and Jack Allen.

With any offensive line, the formula for success is effective communication and strong chemistry. Those attributes were absent in the first half of last season, as the 2015 unit dealt with growing pains because of injuries and inconsistent play.

The injury bug was actually a blessing in disguise in the long run, as rookies like Benny McGowan and Dennis Finley seized their opportunities to receive reps. The experience really paid off as they peaked against No. 2 Ohio State in Columbus.

That showdown was the O-line’s coming out party, as they manhandled star defensive end Joey Bosa and company, racking up 203 total rushing yards. Their preeminent play continued, tallying a 362 total rushing yards in the next two games. The ground game was finally rejuvenated.

The Spartans will try to carry their heavy momentum into 2016. The senior trio of right guard Benny McGowan, left guard Brian Allen, and center Kodi Kieler are expected to command the offensive line. It’s time for amateurs like David Beedle and Thiyo Lukusa to step up to the forefront. This club will have to get their hands dirty with a deep defensive line that will test each member’s physical and mental strength.

Be on the lookout for a run-predicated philosophy on offense in order to get veterans and new guys alike settled into their roles. Kieler moving to center while Brian Allen converting to left guard should be a smooth transition for the dangerous duo.

Blocking downhill and maneuvering to the second level, while avoiding penalties will be key moving forward. I believe that MSU lost two irreplaceable leaders and they don’t have the pieces necessary to fill in the gaping voids. Offensive line coach Mark Staten can only hope that they have a strong showing right out of the gate, as if Conklin and Allen never left.

There is an enormous amount of pressure on the offensive line this year. Can they protect their captain under center, Tyler O’Connor? Can the big men up front bust open holes for the running backs? Questions surround the offensive line, and despite the loss of Jack Allen and Jack Conklin, the Spartans should be in good hands with the talent replacing the two All-Americans.

The offensive line does not need to focus on being better than last year’s talent. Focus should be placed on keeping O’Connor’s jersey clean as well as open gaps for the running backs to make plays at the second level.

Running the football is how the Big Ten is won, and MSU’s backfield is good enough to make plays on their own at the second level. If the O-line can accomplish both of those tasks, the Spartans should be in business.