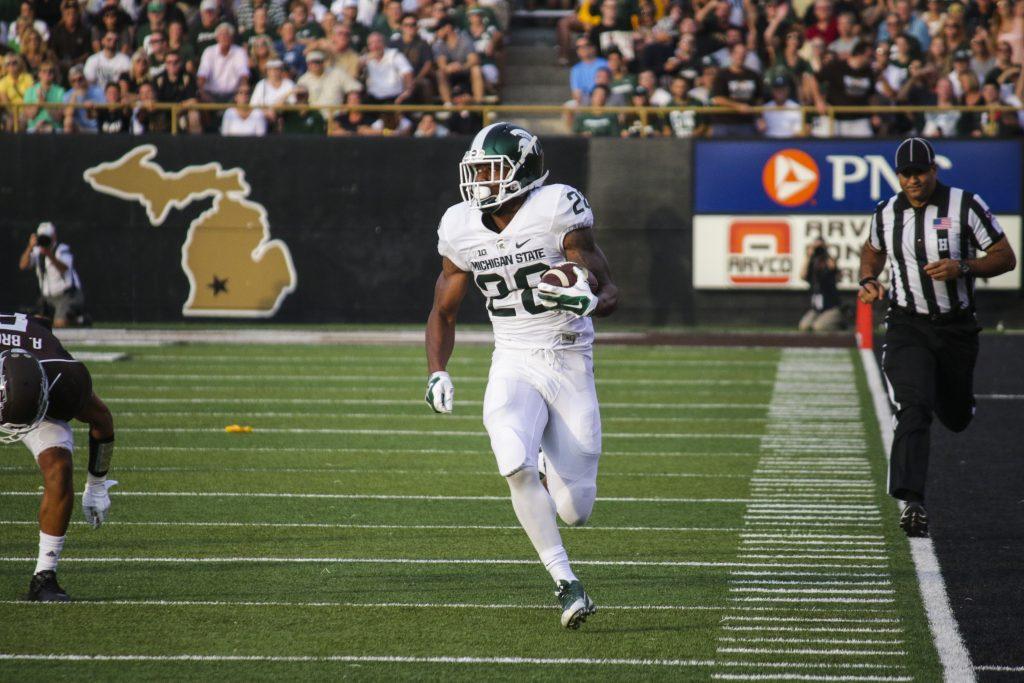 This is the second in a series of assessments on each position for Michigan State Football. To read about the Spartan quarterbacks, click here.
Andy Chmura: @andy_chmura
Few teams have a scarier running back lineup than Michigan State. The race for the starting gig will be fought among sophomore LJ Scott, redshirt sophomore Madre London and junior Gerald Holmes. Each of these three men could start at nearly any school in the nation, but what havoc will be released when they all join forces for the green and white? Only time will tell.

At 6-foot-1 and 224 pounds, Scott is likely the leading candidate as MSU’s primary running back. Scott’s greatest strength is his ability gain yards after contact. He has little experience in a Spartan uniform, but has stepped up in monumental situations during his sole year in the NCAA. Particularly, in the 2015 Big Ten Championship game where he led the Spartans’ final rush into the endzone with seconds remaining. Scott’s will to win is admirable. He gets yards anyway he can, often using his creativity to his advantage. After an offseason focused on quickness and trimming down weight, Scott is poised to have a breakout year.

Holmes is likely trotting second behind Scott in the race for the top of the depth chart. Although not as flashy as Scott, he has made his presence known in the middle of 2015 during London’s absence. There is nothing fancy about Holmes’ style. He simply goes out there and runs it down the defense’s throat, rarely getting tackled for a loss. He also has a useful asset as a pass blocker. Holmes’ skillset encompasses the sheer toughness and invulnerability Mark Dantonio’s gang stands for.

Many have compared Scott to Le’Veon Bell this offseason, but what is the one thing Bell did not have at MSU? He never received any competition. This is where Holmes steps in. From the 2015 season, to the offseason, to training camp, this man has competed with Scott. Do not expect Holmes to make the starting gig easy for Scott. Rather, expect both men to fight and claw for the starting job, pushing each other’s limits farther every step of the way.

London is fairly small, weighing in at just above 200 pounds, but is by far the most explosive of the three running backs. Michigan State was pressed with many questions after 2014 regarding the running back situation. Who would replace the great Jeremy Langford? This question mark was turned into an exclamation point by London who ran for miles against the Oregon Ducks at the start of this past season. London has perhaps the quickest first step of MSU’s three running backs, and flies past defenders caught flat footed.

After recovering from an early injury, London found himself in limited action in 2015 due to the elite play of Scott and Holmes. With this, London is looking to rebound in 2016 and make a stride toward first string. Still, if London is going to give Scott and Holmes a run for their money, he will need to match their toughness and physicality.

The Spartans running back trio is truly frightening. This three-headed monster has the capability to run over any defense they face. But best of all is their ability to complement each other with their different skillsets. Scott is the powerback, London is the quickster and Holmes is a combination of the two. Although we should not expect each of these running backs to get an equal amount of touches, we do have the satisfaction of knowing that MSU has three different tail backs with the capability of taking down any defense at any moment.

“It was hard to manipulate. I think it was hard on the players,” offensive coordinator and running backs coach Dave Warner told Dan Murphy of ESPN.com. “It’s hard to get into a rhythm with that. I’ve tried to stress that I’d like to have a guy this year — a go-to guy.”

Scott is the prominent candidate eying to capture the starting position. His potential is sky high, as he displays Le’Veon Bell-like qualities with his lethal combination of speed and power. The sophomore’s footwork is a thing of beauty while his balance is on point. The 6-foot-1, 240 pound workhorse gets stronger as the game progresses. Just ask Indiana, Ohio State and Iowa how they did containing him in the late stages of the match.

Next in line is Holmes, a bully who punishes whimpy tacklers. Spartan Nation was impressed with the Flint native’s ability to consistently rack up yards after contact. He is a tackle breaking machine with outstanding patience and vision. When the junior is not carrying the rock or being relied on as a receiver, he comes handy in pass protection.

London might be the third tailback on the depth chart, but he is undoubtedly the quickest and most explosive running back of the trio. The redshirt sophomore utilizes his incredible acceleration to carve and slice his way through the defense. Similar to Holmes, London has complimented the aerial game as a safety valve.

Despite the struggle of hunting down the go-to guy, it is a very good problem to have. Scott can jump into the Heisman conversation if he can limit his turnovers, as he had three fumbles last season. He also needs to contribute more towards the maturing passing game. Holmes needs to enhance his agility and stamina, as he will play a critical role in short yardage situations, especially in the red zone. London must improve his patience as a runner as well as becoming more dependable as a pass blocker.

A new quarterback and a raw offensive line with only two returning starters might not be the most ideal situation for the ground game. Along with former running back Delton Williams (Fullback) getting involved with the run blocking, the three-headed monster will use their physicality and strength to their advantage to gain tough earned yards.