Winston, Loyer power Spartans past Ohio State and into semifinals 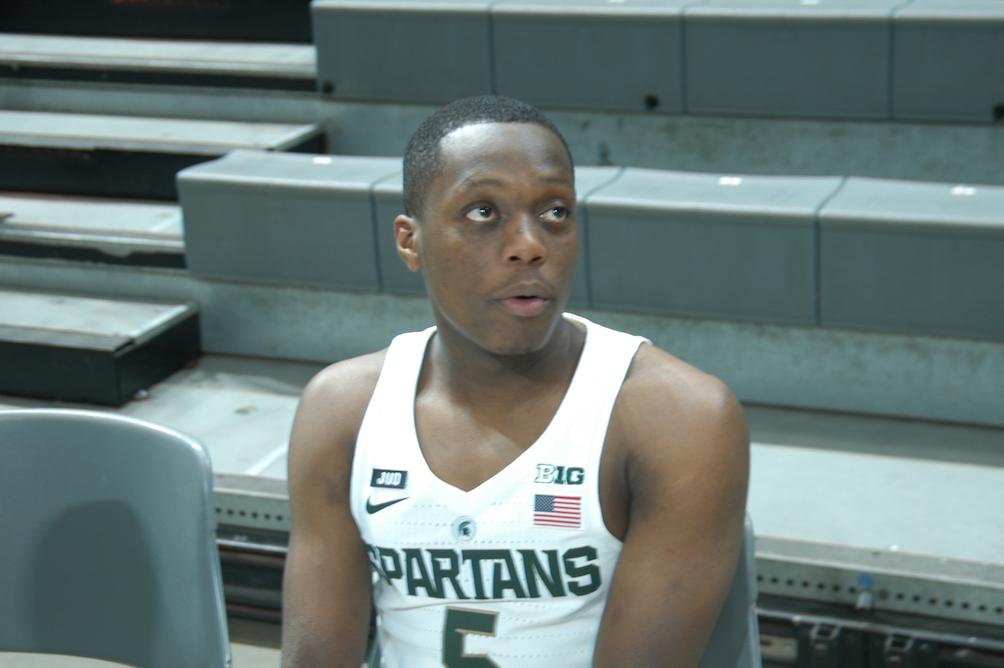 CHICAGO, Ill. — Michigan State entered the Big Ten Tournament as the No. 1 seed, matching them up against No. 8 seed Ohio State on Friday. The Spartans earned the victory 77-70, sweeping the Buckeyes on the season series, moving forward to play the winner of Nebraska Wisconsin.

“Our three main guys Kenny [Goins], Cassius [Winston], and [Xavier Tillman] really struggled early, but we found a way and the name of this game is to, ‘find a way,’” Tom Izzo said.

The game opened up with a seemingly frazzled Spartan team and an intense Ohio State defensive effort. Xavier Tillman started for the Spartans and ignited their offense with a quick steal and two points from the paint to start the game

In his first game back since the hairline fracture on his hand, Nick Ward made quite the return. He effectively pushed through the physical battle with Buckeye forward Kaleb Wesson, managing to put up eight points and snag two rebounds in total.

After fouling out with 9:42 on the clock, Wesson ended the game with seven points and three rebounds.

Although Cassius Winston struggled offensively while collecting three turnovers in the first seven minutes of the half, he led the boards with seven rebounds.

In Winston’s offensive absence, freshman Foster Loyer stepped up. He pulled-up aggressively from deep and took advantage of many uncontested attempts. Going 3-for-3 from 3-point land, Loyer ended the first half with nine points.

“Foster Loyer came in and made some big, big, big, big plays,” Izzo said. “To Cassius Winston’s credit, one of the things you observe as a coach, he was [Loyer’s] biggest cheerleader. One time he even told me to leave [Loyer] in. That shows you the quality of the kid Cassius is.”

After Loyer sunk his first 3-point shot, the Spartans grabbed the wavering lead 12-11 with just over 12 minutes left in the first half.

The United Center exploded with Spartan fans cheering and MSU prevailed through the energetic Buckeyes, ending the first half 36-30.

Michigan State took over immediately in the second half. Some crucial moments included Loyer’s play, earning him a career-high 14 points on the strength of 4-of-5 shooting from behind the arc. Another moment was Kenny Goins’ wide-open 3-pointer, and Matt McQuaid aggressively driving the lane when the Spartans were on a roll.

“Maybe it’s March time for [Loyer],” Izzo said. “He looked so smooth and comfortable tonight and definitely saved us in the first half.”

McQuaid finished out the half with 12 points and four assists, while the other senior Goins, ended the game with eight points and six assists.

Although Keyshawn Woods and Andre Wesson led the Buckeyes with 16 and 14 points, respectively, it was not enough to overcome the Spartans’ hunger for victory. Michigan State shot 52 percent from the field and 41 percent from deep.

The Spartans put the game on ice after a half-court pass from Winston to Aaron Henry for an electric dunk to put the Spartans up 63-49 with 8:25 left in the game.

The game tightened up slightly in the last three minutes, as the Buckeyes went on a 16-2 run to finish the game. After some foul trouble and turnovers, the Spartans sealed a win, 77-70.

The Spartans will move on to play at 1 p.m. ET against the winner of Nebraska and Wisconsin. You can listen to the semifinal game live on Impact 88.9 in the Lansing area.