Turk: It took 32 games, but Foster Loyer may have just arrived 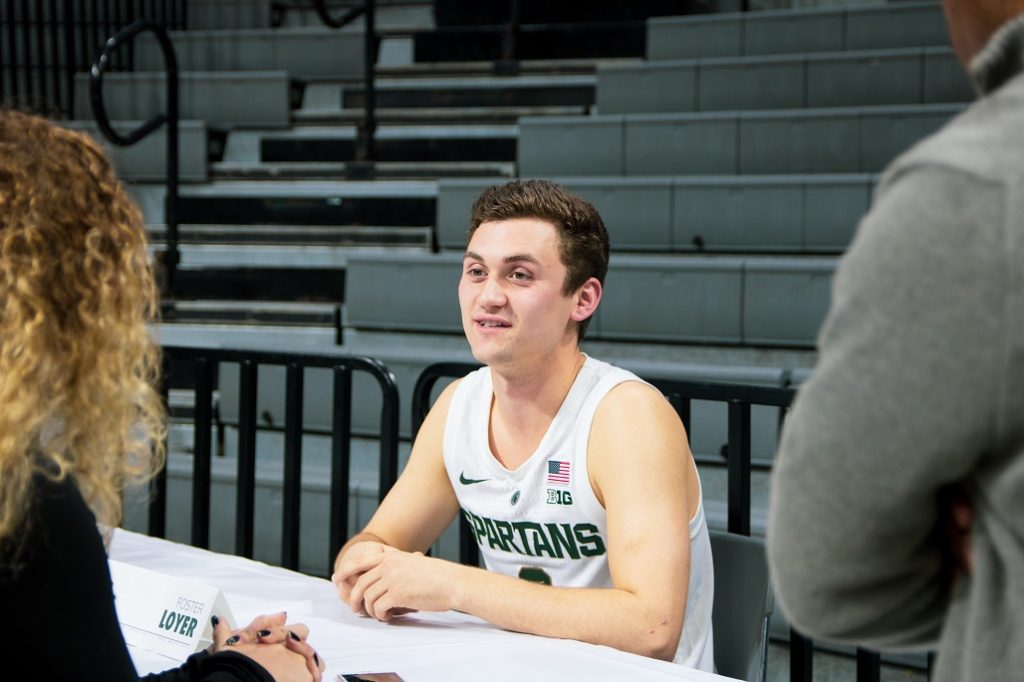 CHICAGO — With 12:59 left in Michigan State’s 77-70 win over Ohio State in the Big Ten quarterfinals, Foster Loyer missed an open 3-pointer. It finally denied the conspiracy theory being formed at the United Center that for 40 minutes, Loyer and Cassius Winston had switched bodies, Freaky Friday-style.

It’ll forever be the Foster Loyer Game, drawing shades of Spike Albrecht’s first half for Michigan in the 2013 NCAA national championship game. And why not? His first four 3-pointers were shot with the confidence of a Big Ten player of the year, and by the time he drove and finished over C.J. Jackson to push the Spartan lead to seven, it was officially bizarro world.

Loyer’s 12 first-half points drove MSU into the lead in a game the Spartans won comfortably. Imagine reading that sentence five months ago.

“I’m always going to be confident in myself,” the Clarkston, Mich. freshman said. “My teammates were doing a great job getting me open and setting me up. I’m just happy to do what I did for the team.”

Winston’s start on Friday didn’t really inspire much confidence, as the junior was hesitant to shoot early on. With Ohio State applying solid pressure in the first half, Winston committed three turnovers before Loyer stepped in.

His first pair of 3-pointers came from the left side, both late in the shot clock serving as desperation attempts as much as anything else. MSU head coach Tom Izzo said Winston has been Loyer’s “biggest cheerleader” and after those shots, Winston had a good feeling.

“This game wasn’t really a surprise,” Winston said. “Once he hit that second one, I was like ‘oh, okay, we’ve got something going now.’”

Loyer hasn’t had it all his own way in his freshman year. He had attempted just four 3-pointers coming into Friday, and making four of his five outside attempts on Friday unlocks a potentially key element to Tom Izzo’s team.

Keeping Winston at close to 100 percent is paramount for a deep tournament run. Loyer’s minutes may need a small bump to keep Winston in good condition, but it’s more about what he does with them that will mean the most going forward.

Loyer doesn’t have to hit multiple 3-pointers or draw a pair of charges, but the momentum the freshman can pick up from Friday could be enough to turn him into an adequate player on both ends.

“I’m going to try to do the little things,” Loyer said. “For me, it was nice that a couple shots went down but for me to be in there and play more, I need to compete and do things on the defensive end.”

With the potential for two more back-to-back games this weekend, an already-tiring MSU rotation couldn’t have asked for more from its backup point guard. Loyer’s growth has been maddeningly slow at times through the latter stages of Big Ten play. A career-high 14 points and three assists for his backup will be music to the ears of MSU’s starting point guard.

“He definitely deserves it,” Winston said. “He keeps his head up, he stays confident, he puts his work in. Even if things probably didn’t go his way in his freshman year, he remained himself. That’s huge.”