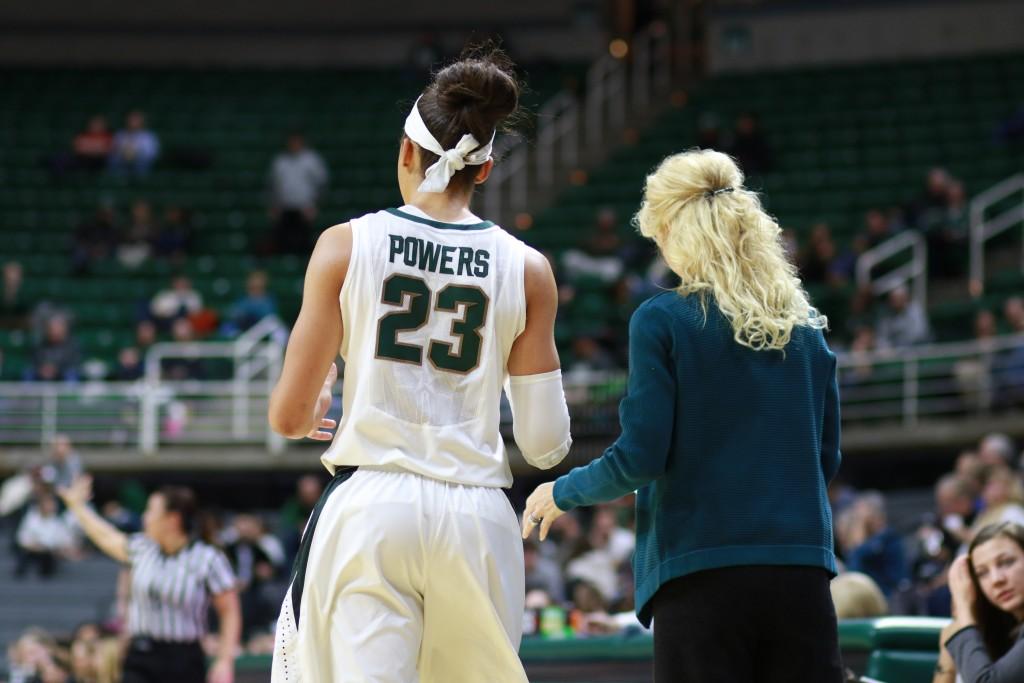 The Michigan State Spartans’ season ended Sunday after losing in the second round of the NCAA tournament to No. 5 seed Mississippi State. Their season was one of ups and downs, including great individual performances, tough losses, and plenty of injuries. As they reached the highest of highs, their exit from the tournament ultimately makes this season a disappointment.

Michigan State started the season ranked No. 24 in the preseason AP poll. There was more hope going into this year as they finally would have a team of healthy bodies available. This was preached over and over at media day, and head coach Suzy Merchant seemed relieved to have players at her disposal.

“I think we’re definitely looking forward to having a healthy roster. I think it starts there, and that is exciting,” Merchant said. “We returned 80 percent of our offense, over 60 percent of our rebounding.”

The Spartans started the year exceeding expectations as they started 3-0 and moving into the finals of the Junkanoo Jam in the Bahamas. Their first loss came at the hands of No. 5 Baylor in a closely contested game. This tournament was important for the Spartans, as junior forward superstar Aerial Powers did not play up to her usual standards while recovering from tendonitis in her Achilles. What was important was that junior guard Tori Jankoska stepped up her game, averaging 26.5 points per game. This showed that MSU could still win games without their best player and team leader.

Obviously travel got to Michigan State, as they lost their first game back from the Bahamas to Louisville. This was an upset of sorts, as the Cardinals were 1-4 and looked like a season of struggles was destined. The game was the first sign of the Spartans having turnover problems on the year, as they had 12 in the first half alone. What made things worse was that Powers re-injured herself, requiring her to take more time to recover from an injury she was almost over. As bad as all this was, this game motivated MSU as they went on a five-game winning streak after the upset loss, annihilating those five opponents by an average score of 28.6 points per game.

A theme that began to occur was one of the Spartans getting no love in the AP rankings. Their five-game winning streak, much of which Powers was not near 100 percent, did not prompt the AP to move the Spartans up in the rankings, as they stayed at No. 24 after this streak. This continued throughout the year, as the highest they reached ranking-wise was No. 16, even with good conference wins and impressive play against tough opponents.

MSU had to endure a rough stretch towards the end of January after their road game at No. 5 Maryland was canceled twice due to inclement weather. This prompted them to play four games in seven days, which is unheard of in collegiate basketball. The team called this their “Warrior Week” and hoped to come out of it without any injuries. While they achieved an injury-free week, they lost twice in the process. A positive coming from this was the much improved play of sophomore Branndais Agee, who averaged 13.5 points per game in this “Warrior Week.” Agee stepping up her play meant the team had a third option to look to offense, which resulted in less pressure placed on Jankoska and Powers.

The Spartans might have been caught looking ahead to the Big Ten Tournament. However, with one month of the season left, MSU had to focus on the task at hand, and focus they did. Leading up to the tournament, the Spartans went on a six-game winning streak that included a scoring battle between Powers and Minnesota senior guard Rachel Banham and a three-overtime endurance contest against Ohio State on senior night. Both of these final wins were high-scoring affairs in the 100’s and cemented the Spartans as third in the Big Ten.

The Spartans’ first opponent in the Big Ten tournament was a Purdue team that MSU beat handily earlier in the year. With that being said, the intensity of postseason basketball took over as the Boilermakers took a halftime lead of 32-25. This was shocking to see as the Spartans were playing at such a high level, along with Powers playing what seemed like the best basketball of her career. The Spartans did climb back, however, led by Powers getting 26 points to go with 12 rebounds, and claimed a 65-64 victory to face the Buckeyes in the next round.

There was much less drama for MSU in their next tournament game against Ohio State as they handled the Buckeyes with ease, 82-63. Powers showed out once again as she collected another double-double. Jankoska shined as well, with 23 points. The Spartans kept the Buckeyes’ leading scorer Kelsey Mitchell to shooting 4-of-18 from the field and outrebounded Ohio State 48-31. This win gave MSU plenty of momentum heading into the championship against Big Ten regular season champion Maryland.

As great as the semifinal was, the final showed nothing of the same. Powers only scored eight points and the Spartans had their lowest scoring output of the year, as well as the lowest in a Big Ten championship final. It was a disappointing effort to say the least, as the usual high-scoring Spartans had only one player in double-figures. With this bad of a loss, there was speculation as to whether MSU would get a top-four seed in the NCAA tournament and potentially two games at home.

The Spartans finally got some love from a selection committee, securing a four-seed. However, they were not able to get the home games,due to a high school tournament played at the Breslin Center. But that did not deter MSU from playing tough, they outscored their first-round matchup, the Belmont Bruins, in every quarter. They outrebounded the Bruins, and for what seemed like the first time, they won a game even with having more turnovers. Powers also became the school’s all-time career scoring leader in this game by putting up 27 points and controlling the game on both ends. Senior center Jasmine Hines had a great game when it mattered the most, scoring 24 points and pulling down seven rebounds. The win propelled them into the second round for a matchup against Mississippi State.

Mississippi State took home-court advantage because of the Spartans’ home being occupied, and it certainly played a part in the win over the Spartans. The Spartans had 21 turnovers and were outrebounded 37-33 in the game. Although both of these were usual signs of a Spartan loss, the Spartans were able to stay in the game with four of their five starters scoring in double-figures. The biggest takeaway from this game will almost certainly be what seemed to be a late blown call by the referees. Michigan State was down two and had just missed two opportunities to tie the game up when a Mississippi State player grabbed a loose ball. In doing so she stepped out-of-bounds while holding the ball, before passing to a teammate. If there was a call, the Spartans would have had one more chance to tie or win the game, but the no call meant the end of the Spartan season.

With a heartbreaking way to end the season, Michigan State will have to look back on the things that cost them games that could have aided at any point. Turnovers and rebounds were their biggest issue all season, and cleaning those up early could have prevented problems throughout the year. Powers was the without a doubt the team MVP, and deservingly so. She and Jankoska will have to find scenarios next year where both players can flourish together, not just one or the other. MSU will also lose critical seniors in Hines and forward defensive stopper Akyah Taylor.

A bright spot on the next season will be retaining both star players in Jankoska and Powers, and the fact that they will have three ESPN 100 recruits, Mardrieka Cook, Taryn McCutcheon, and Nia Hollie, in East Lansing. These factors represent that the Spartans have another great shot at a Big Ten championship, and a potential run in the NCAA tournament. Looking back on the year shows what MSU could have done better, but if Merchant looks ahead, she can smile knowing her team in the future might be even better.