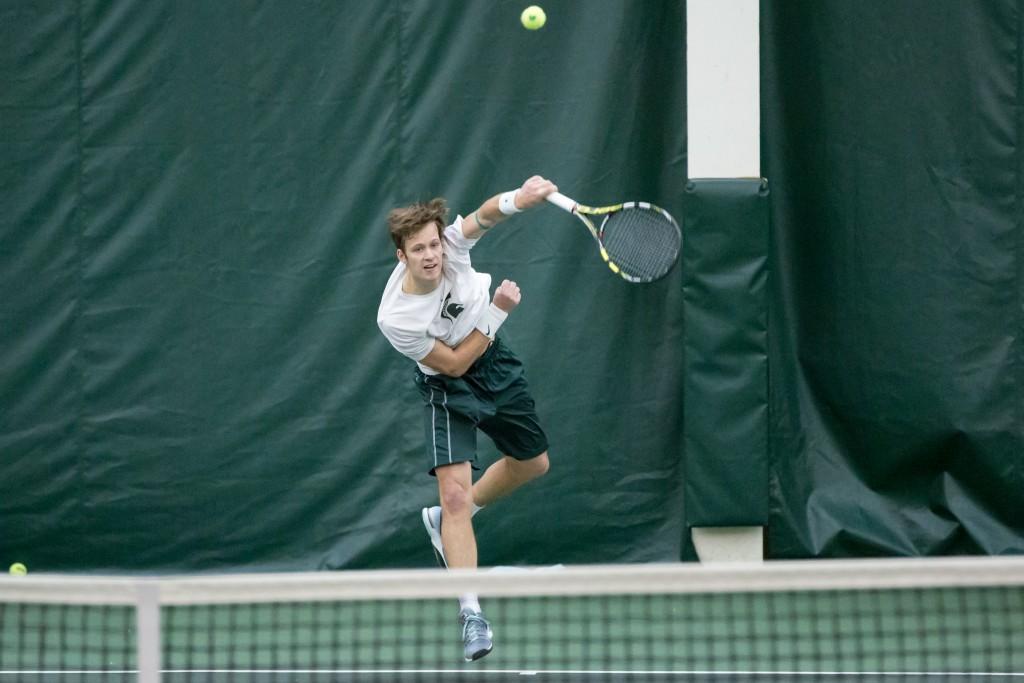 If you like flare and passion in your athletes, Michigan State men’s tennis is for you. Although an unlikely candidate, as the sport is known for its high class events like Wimbledon, the group of Spartans throw their own sense of style into the game.

The team marches out in bright neon shoes (similar to what MSU basketball wore against Maryland) and for many, the flashy apparel doesn’t stop there. You can catch Alex Kim with his white ninja head band and camouflage MSU armband. Mac Roy can be seen missing one sleeve, his bare arm decked out with elastic bands. He also sports a hairstyle similar to Pro Bowl wide receiver, Odell Beckham Jr.

The flare continues once the matches begin. You can hear Colin Harvey giving intimidating war grunts after a big point win. Michael Dube will fist pump after almost every single point he wins, amping himself up internally in a sport that relies so heavily on mental toughness.

And of course you cannot forget Jasper Koenen, who stands at 6’5 and could easily intimidate anyone. His teammates call him the teddy bear and afterwards he is friendly and can be caught cheering on the rest of his teammates. A gentle giant if you will.

A team full of personalities is important to back up with solid play. That’s exactly what the Spartans did Saturday as they had a double header with Ball State and Detroit Mercy.

In the morning frame, MSU would quickly earn the four points needed to win against Ball State. According to sources, the guys began to slack and lost the next three matches as they did not matter in the outcome of the game.

This however was not the case for the in-state competition against Detroit Mercy.

It seemed like it was going to be a good evening for Michigan State as partners Kim and Harvey defeated their opponent 6-3 in their doubles match. But over on court one it was a different story. Roy and Dube fell 3-6, and the frustration was evident when the pair finally lost. Roy slammed a ball at the back wall before shaking hands. The disappointment in his face was apparent.

Roy knew his behavior was unacceptable and had to change if he and his teammates were to be competitive the rest of the evening.

“I had to take a little walk into the locker room and sit down and calm myself down. Cause you know when you get negative it’s really hard to get back from it and I didn’t want my team to see me that way,” Roy said after the event. “I came back out to try to refresh and start over.”

With each school taking a doubles match, that left Koenen and Billy Shisler as the deciding factor whether MSU would obtain the crucial first point.

As a sports fan you couldn’t ask for a better situation. Series tied, Detroit is up in the last match 6-5 going for the win. Shisler and Koenen hold on to tie up the match at 6-6. But Detroit would eventually have their way, hitting a ball right on the line to win the tiebreak and giving Detroit the match 7-6. This also gave the Titans the first point of the event, meaning MSU would have to win four of the six singles matches in order to obtain the win.

Koenen didn’t want to dwell on such a close loss. But it still stung for him to be so close and just miss it.

And come out strong is what he did. Koenen would take the first set 6-0, in a best two out of three game. In fact the whole team came out strong as four of the six games started with breaking their opponents serve, meaning they won the point despite not having the serve.

After what looked like a worn down and tired Spartan team in doubles, the group managed to bounce back and look reenergized for singles. Which correlates with a team motto, “wake up!”

“Wake up!” Roy exclaimed when asked if there was something said in the locker room before singles. “That’s the motto when we’re sleeping.”

Koenen brought up the fact that Detroit had just come off a match with Ball State and were able to carry that momentum into the games against MSU. After their morning match, the Spartans went back to their respective beds and it seemed like they were still waking up from their midday naps when it was time to face the Titans.

The team woke up and won five of the six single matches, and the only loss being a close fought match by Shisler who took it all the way to a third set tie break.

The Spartans have another double header in East Lansing on Saturday, February 6 against Cleveland State and Morehead State.