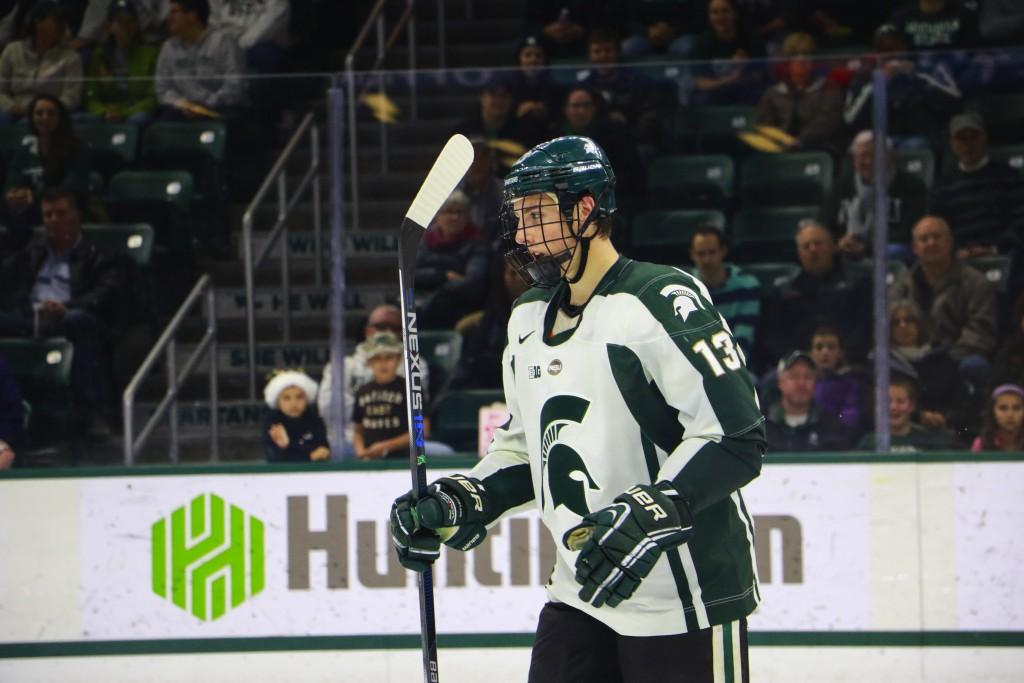 It has been a rough season for the Michigan State hockey team, there’s no doubt about that. But this past weekend the Spartans did something that they have  been unable to do since Dec. 11, win a game. After an emotional overtime win over the USNTDP U18 team last weekend, the Spartans carried that momentum into Columbus, where they beat the Buckeyes 4-2 and Friday, but were unable to complete the sweep losing 2-1 on Saturday.

Dylan Pavelek, who has really shined for the Spartans as of late, got things started early when he put the Spartans up 1-0 just over three minutes into the game. Michael Ferrantino followed that up with a beautiful snipe that beat Buckeye goaltender Christian Frey to put the Spartans up 2-0 half-way through the opening period.

As the first period winded down, OSU was able to get on the board as the Buckeyes leading scorer, Nick Schilkey sent his 13th goal of the season past Jake Hildebrand.

Multiple times this season after getting themselves a lead, the Spartans have been  prone to going into a shell and the mindset turns to simply playing not to lose. It’s like they go on a multiple minute penalty kill hoping the other team can’t find the back of the net. That wasn’t the case this time as Brennan Sanford extended the MSU lead in the second period with his fifth goal of the season, tying Zach Osburn for the team lead among freshmen.

Early in the third period, the Buckeyes again pulled to within one goal when Mason Jobst cut the Spartans lead to 3-2. But just as they did all game, the Spartans kept fighting and with Frey pulled for an extra attacker late in the game, Mackenzie MacEachern added an empty net goal to seal the 4-2 win for MSU.

Saturday was the same story for the Spartans but unfortunately there was a different result.

MacEachern added a goal late in the second period when Ferrantino fed him a perfect one-timing pass they Frey had no shot of stopping. Unfortunately, it wouldn’t be enough as the Spartans were unable to find the back of the net in the third period and would lose this game by a final score of 2-1.

Even in the loss, the Spartans did not stop fighting. They were able to chip pucks in and established a good forecheck and as a result, the majority of play in the third period was in the OSU zone.

Up next for the Spartans are the always dangerous Michigan Wolverines, who are coming off a decisive sweep of Penn State this weekend. Game one of the weekend series will be played at Joe Louis arena on Feb. 5 with game two coming back to Munn on Feb.6.