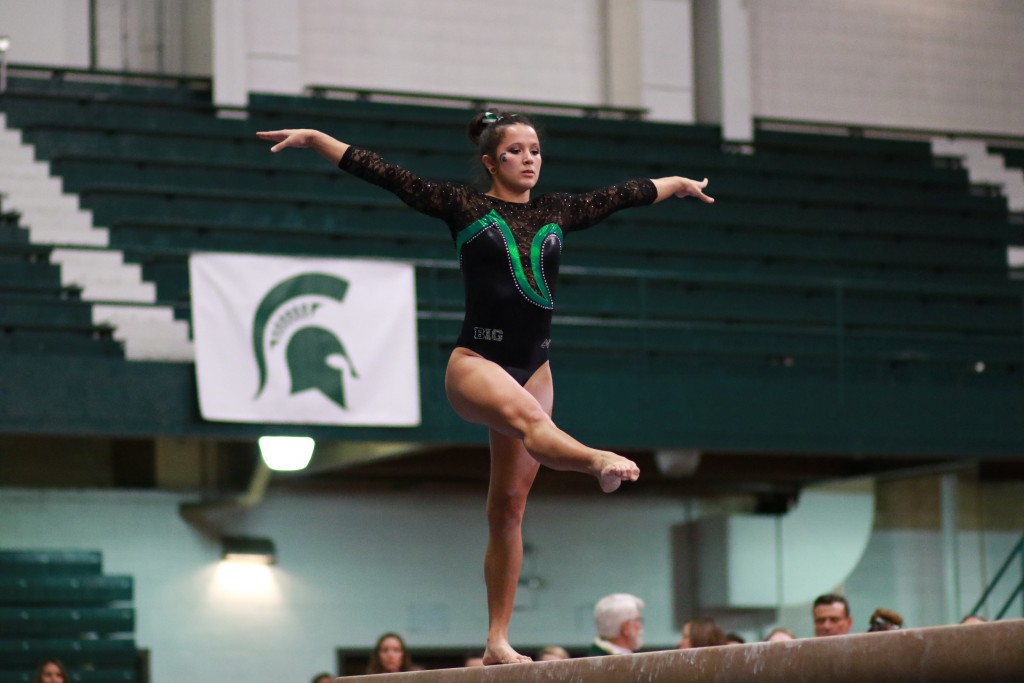 The Michigan State Women’s Gymnastics team was hungry for their first win of the season Saturday afternoon. With the Jenison Fieldhouse hyped up and the girls ready to play, they earned the win in their home quad-meet against Rutgers, Pittsburgh, and Towson.

They had a 0-4 record staring them in the face, though, and they came into this match looking like a completely different team.

“We felt like Iowa came in here and dominated the house,” coach Kathie Klages said, referring to the Jan. 15 loss to Iowa a couple weeks ago. “It’s our house, not their house, and we decided we needed to make a change as a team.”

Junior Elena Lagoski noticed this change too, and she said their attitude is something they have been working on.

“We try to keep a consistent attitude and try to stay hype no matter what happens,” Lagoski said after the match. “If someone falls, we still make sure to show that it was the greatest routine ever. We did well with that today. We believed in every single one of us and trusted everybody that we could get through it.”

The Spartans started the match strong by putting up a 48.700 total at the vault, nearly reaching their season-high of 48.750. Senior Nicola Deans started off with an impressive 9.850 score and set the tone for the rest of the match by getting the crowd into it early.

This gave the Spartans the lead after the first rotation, and they held the lead through the second, after a 48.425 performance on bars. Freshman Jessica Ling had a strong 9.8 performance, but a big mistake from Junior Kira Frederick gave her a 9.250 and tightened their lead.

Towson came in ready to perform and stayed with MSU throughout the entire match, battling for the lead and forcing each other to cherish every single point they could get. The Tigers never stayed more than half a point away from each other on the scoreboard, and they finished the match just 0.125 behind the Spartans.

In fact, all four teams were close to each other all throughout the match, with the exception of the end of the second rotation, when Rutgers was nearly one full point down from the lead due to their struggles on beam.

Things started to fall apart for MSU when they had their turn on the beam in the third rotation. The 47.700 total was below their season average of 47.942, which is their lowest season average out of all four gymnastics stations. This brought their deficit to half a point and worried lots of Spartan fans.

Coach Klages was not worried though, and neither were the Spartan athletes, who were now on the section they are the most comfortable with: the floor exercise.

“We knew we were behind, but we knew if we did what we are capable of doing on floor, we could sneak out the win,” Klages said. “The girls did a phenomenal job and I am so proud of them. They came back and rocked that floor rotation and was able to squeak out the win.”

Michigan State dominated the floor exercise and finished with a stellar 49.100 score. Lagoski tied for first place in the floor standings with her score of 9.850. She is showing true strength in this event, as she posted her incredible season-high of 9.900 on floor in the MSU’s last match against Minnesota.

The strength of their team is undisputedly the floor exercise, as it is their highest season average of the four rotations and brings out the emotion and passion in the team.

Lagoski, who showed that passion in her routine and jumped into the arms of her teammates afterwards, spoke on the bond between her teammates.

“They mean everything to me. I don’t think I would be able to do half the stuff I do or believe in myself as much as I do, if they weren’t behind me. I always feel that if they believe in me then I can do it, and that’s what I really love about these girls.”

This win looks to be a huge turning point early in the season. The team stays home for their next match against conference rival Penn State, in hopes of evening out their conference record and give them an overall winning record for the first time since ending 12-10 last season..

The match on next Saturday, Feb. 6, is recognized as the Jan Howard Memorial Breast Cancer Awareness Meet, taking place right in Jenison Fieldhouse at 2 p.m.