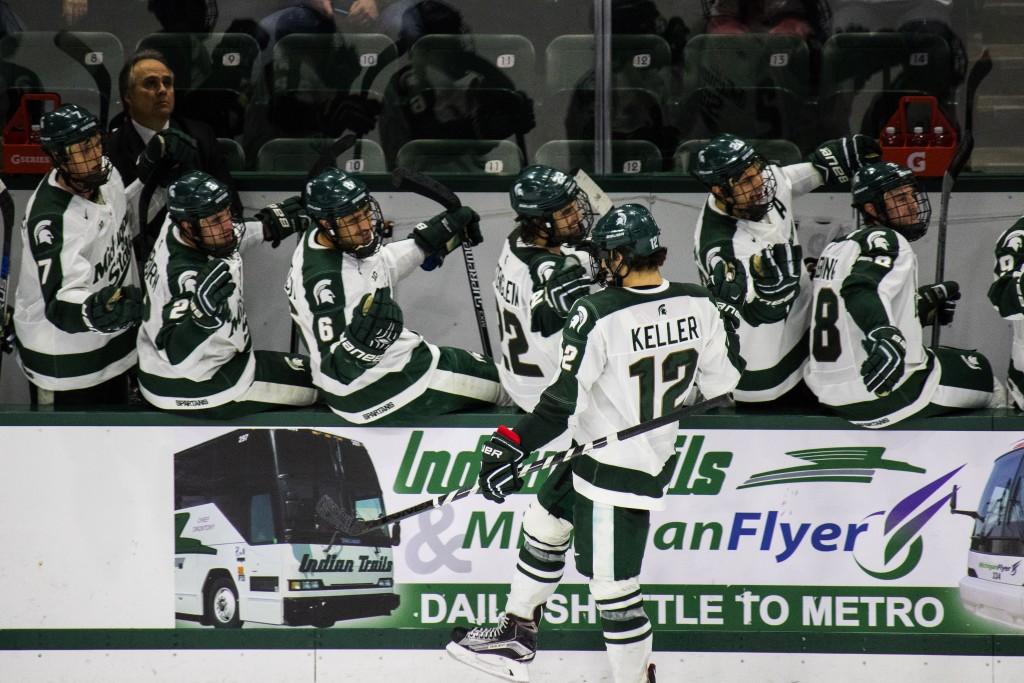 Imagine you’re waiting for your favorite tv show to start it’s new season, and instead of new content you’re stuck watching re-runs you’ve seen a million times. That was Michigan State as they gave up the tying goal to USNTDP forward Joey Anderson with 42 seconds remaining.

Then imagine that moment you realize that you’ve never seen this episode before and thoroughly enjoy it’s outcome. That was when Spartan forward Thomas Ebbing cashed in on a rebound in overtime to secure a 3-2 overtime victory Saturday afternoon at Munn Ice Arena.

A long shot by John Draeger found its way to USA goaltender Joseph Woll. Woll made the initial save but gave up a juicy rebound to his left side with Ebbing driving the net.

“It was nice to find a way to win,” said Spartan coach Tom Anastos whose team had not won a single game in 2016.

Michigan State started off strong and fast against the U.S. National Team. Mackenzie MacEachern received a pass from Michael Ferrantino near the goalline. As he skated towards the goalmouth the junior forward rifled a shot over Woll’s left shoulder that struck the far post and deflected into the net.

MacEachern’s highlight reel goal gave the Spartans a 1-0 lead after the first period.

During the second period Team USA launched a flurry of shots at sophomore goaltender Ed Minney. The Wind Gap, PA native stood firm though as Michigan State took their 1-0 lead into the third period.

In the third period, JT Stenglein made 2-0 MSU just over five minutes into the frame. It was at that point that the U-18’s poured on the pressure with 29 shot attempts 18 of which made to Minney. At 14:17 of the frame, Clayton Keller took advantage of a rebound to split the MSU lead in half at 2-1. Almost five minutes later Anderson tied the game off of a rebound shot that Minney had no chance on.

It seemed like the same old Spartans who would give up a lead late in the third period and lose the game in overtime.

However, Michigan State rallied and outshot their opponent 4-2. Bolstered by some key saves by Minney and a fortuitous power play the Spartans prevailed in overtime and sent the crowd of 5,112 home happy.

While this victory doesn’t officially count towards Michigan State’s official record (MSU is still  5-17-2 overall). The stunning overtime victory against some of the best young talent in America should pay dividends as the Spartans open up the back half of Big Ten play in Columbus next weekend.

Buckle up, because this season’s not over yet.