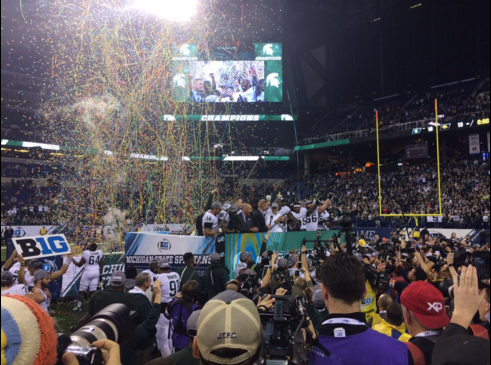 Following an emotional victory in a conference championship game, one might expect a college-aged athlete to be caught up in the moment.

To savor the accomplishment. To bask in the glory of success.

And with such bright lights shining on them, potentially say something they regret — or at a minimum a good quotable phrase or bulletin board material.

So what did senior linebacker and captain Darien Harris have to say following Michigan State’s 16-13 Big Ten Championship victory —the second of his career — over the Iowa Hawkeyes?

“First of all, it’s not the end-all be-all, we want to go and win the whole thing,” Harris said.

That is the type of statement that comes from someone who isn’t satisfied. Someone who has tasted success yet still desperately craves more.

Harris’ senior class has accomplished just about everything anyone could hope for in a college football career.

The Spartan graduate’s accomplishments include but are not limited to: two Big Ten championships, back-to-back top five finishes, a Rose Bowl victory, a Cotton Bowl victory, and a 6-1 record against AP top 5 teams in their last seven games and 7-1 against in their last eight against top 10 teams — and even amongst all of those accolades, what happened on Saturday night will stay with him as much as any of the others.

“It’s right up there at the top (with the best wins of my career),” Harris said. “For us to be able to win another Big Ten title, for us to get our forty-third win as a senior class — most wins for a class in Spartan history — I mean that’s big and it’s a testament to this class and it’s what we talked about four and a half years when we got here.”

However, this big time win — like so many of the others — didn’t come without adversity.

After holding Iowa to just five yards on seven plays in the third quarter, the Hawkeyes took an attempt at a deep ball and connected for the biggest play of the game to open up the fourth.

Iowa receiver Tevaun Smith was able to break loose from the other Darian on the defensive unit — this one was the junior cornerback, Darian Hicks — and CJ Beathard heaved ball into the awaiting arms of Smith without causing him to break stride and Iowa regained a 13-9 lead on the 85-yard bomb.

Once the Hawkeyes sustained success on the play, they tested Hicks deep two more times but he made sure he didn’t let the first bad play affect the rest of his game.

“I got over it, I was like whatever,” Hicks said with confetti stuck to the sweat on his shoulder pads. “We were playing hard all game, and plays happen. I can’t go look back in the past.”

The only place Hicks and his teammates can now look is the future — which is a bright one. The No. 3 Spartans have a New Year’s Eve date with Nick Saban and No. 2 Alabama in Dallas, Texas at the Cotton Bowl at 8:00 p.m. EST on Dec. 31.

Hicks echoed Harris’ sentiment on where with win ranks due to where it now places the Spartans.

“This one ranks probably above (the rest) because we get to take it a step further now, it’s playoff time” Hicks said. “We’re not satisfied yet, not until we get that National Championship under our belt.”

While Hicks says they aren’t satisfied, and Harris echoes they want to win it all, he will admit that he got emotional.

“It’s kind of hard to put it all in perspective when you step back and think about what we were able to do today,” Harris said following the victory. “I couldn’t be more proud of this team. I don’t even know what to feel, my emotions are rushing all over the place.”

One thing that wasn’t rushing all over the place was the Iowa Hawkeyes as MSU held them to a season low 52 yards on the ground.

That is one thing the Spartans’ upcoming opponent does extremely well. The Crimson Tide’s starting running back, Derrick Henry, totaled 1,986 rushing yards — an SEC record — and 23 touchdowns on the season.

But while many will — like at so many other times in the Dantonio tenure — count Michigan State out because they are going up against the ‘mighty Crimson Tide’. The Spartans won’t fold for anyone.

“They put their pads on just like we do,” Harris said. “One foot, one leg…at a time.”