Key Plays From the First Half 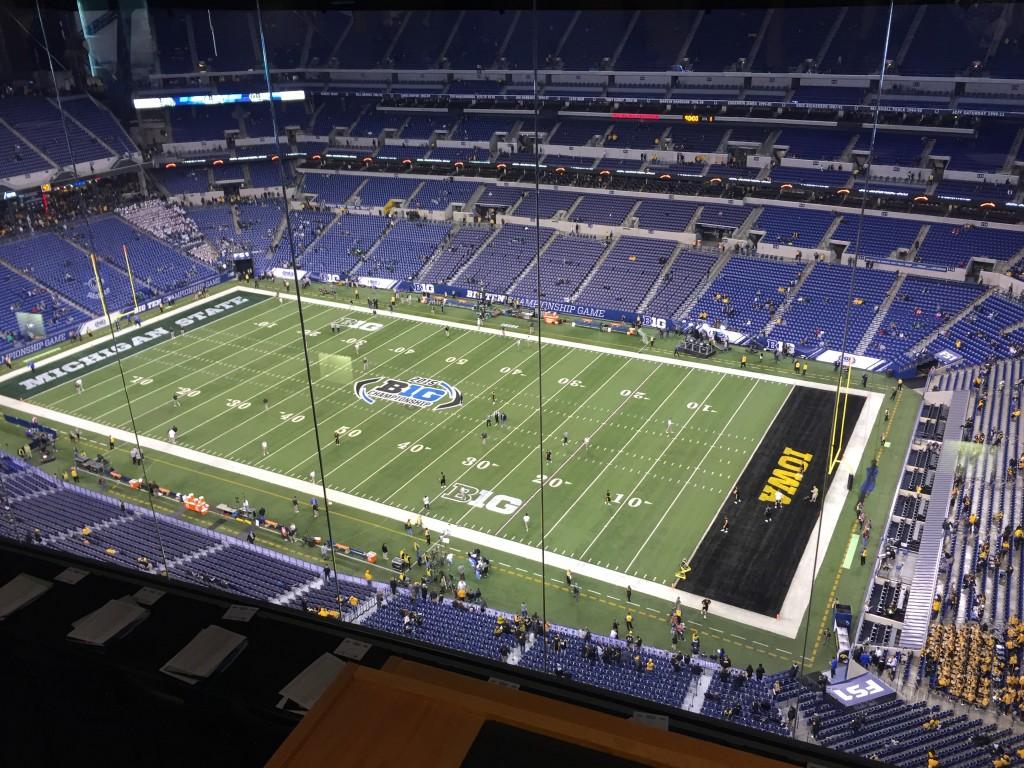 INDIANAPOLIS – No. 5 Michigan State trails No. 4 Iowa 6-3 at the end of the first half in the Big Ten Championship. Here are the biggest plays from the first 30 minutes.

On just the third play from scrimmage, Iowa quarterback C.J Beathard threw a pass over the middle to tight end Henry Krieger Coble. Riley Bullough forced the fumble on the tackle and Arjen Colquhoun recovered at the Iowa 27.

Felton Davis’ reception on third-and-15 from Iowa 32, sets up first and goal for from the 10 — was the first first-down of the game.

On third-and-1 Beathard keeps it but MSU stuffs it. First time all season Beathard had been stopped on a keeper, was 14-14 before this play. Forced an Iowa punt from midfield at 8:29.

On second down Connor Cook was being tackled but instead of absorbing the sack, he tried to make a play but instead threw it into the waiting arms of Josey Jewell, setting up the Hawkeyes on the MSU 20-yard line with 6:57 remaining in the first quarter.

Third-and-goal from MSU six, Beathard drops back and attempts pass to Tevaun Smith but Arjen Colquhoun timed the slant route perfectly and broke up the would-be touchdown in the end zone. Iowa had to settle for a field goal which tied the game up at 3 with 5:08 to go in the first quarter.

Iowa goes for it on fourth-and-four at MSU 20-yardline and commits a false start. The Hawkeyes then send their FG unit on the field and Koehn connects on the 43-yard attempt giving Iowa its first lead of the game, 6-3 with 13:28 to play in the half.

With 11 minutes remaining in the half, MSU was looking at Third-and-3 at the Iowa 43 yard line. Connor Cook completed a dump off to Madre London who broke a tackle in open space for a gain of 14.

With 8:42 to go in the half, Michael Geiger attempts a 52-yard field goal that misses less than one foot outside the left upright and Iowa held onto the lead, 6-3.

Third-and-8 with seven minutes remaining C.J Beathard finds George Kittle for a gain of 20 down to the MSU 33-yardline.

Third-and-goal from MSU five yard line Beathard attempted a pass to Henry Krieger Coble but after Riley Bullough knocked the ball loose, it popped in the air, landed on his back and safety Demetrious Cox came swooping in to corral it before it fell incomplete. The play completely shifted the momentum of the half and set up MSU with a first-and-10 at the 20 with 3:51 to go in the half.

Michael Geiger is no good on the 52-yard attempt as time expired in the first half. The attempt hits off the cross bar. Iowa leads 6-3, MSU will get the ball to begin the second half.