Spartans Rally to Down Wisconsin 4-3 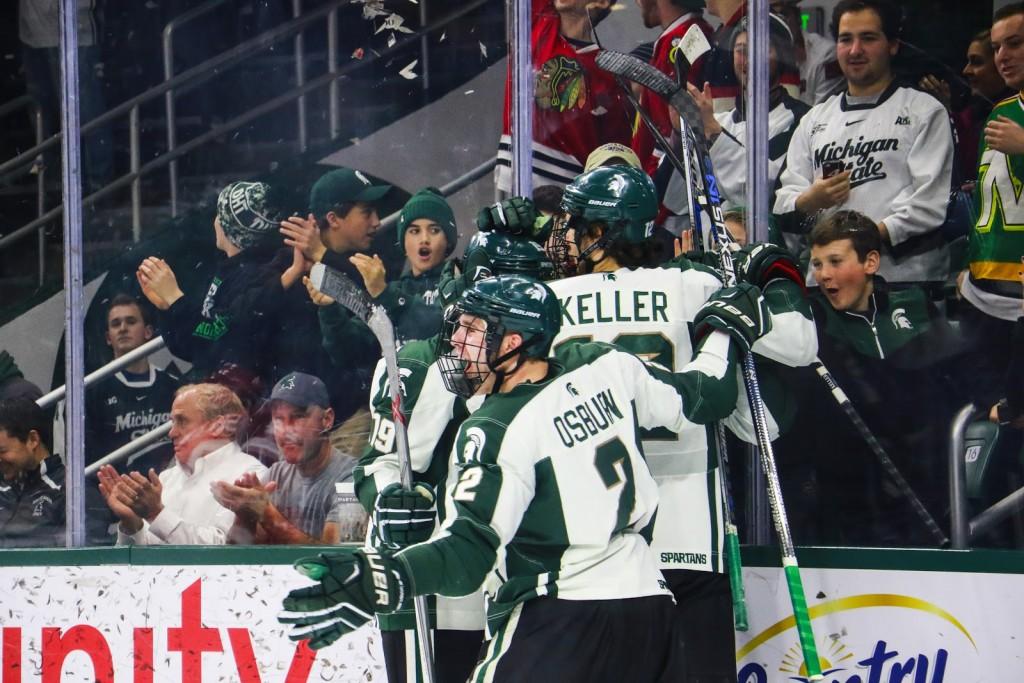 The last time Justin Hoomaian scored a goal was against Wisconsin, two years ago.

The redshirt senior from Novi, Michigan has gone under the radar ever since. But last night, with the game tied in the third period, Hoomaian found himself with the puck on his stick with one man to beat.

“I saw the defenseman, he was turning inside so I turned outside and I had him beat, so it was me just one-on-one with the goalie and I just wanted to put the puck in the net,” said Hoomaian.

Hoomaian did just that, lifting the Spartans (5-9-2) over the Badgers (3-7-5) in a crucial game at Munn Ice Arena. It also gave Michigan State their first win in over a month.

“It’s nice. It was a nice way we did it too, coming from behind there and sticking with the process,” said senior captain Michael Ferrantino.

As the first period was winding down, the Spartans found themselves in a familiar 2-0 hole. Matt DeBlouw had a two-on-one with Brennan Sanford. DeBlouw slid the puck over to Sanford who rifled it top shelf past Wisconsin goaltender Matt Jurusik.

Wisconsin would regain the two-goal lead midway through the second period thanks to Matthew Freytag’s tip right in front of the net. Once again, Michigan State tied it up when Travis Walsh fired a shot at the top of the right faceoff circle.

Now with momentum, the Spartans were on the attack. MSU had several quality chances throughout the period, but were unable to find the back of the net. With just ove,r four minutes left in the second, Michigan State had another two-on-one, this time with Mackenzie MacEachern and Ferrantino. MacEachern shot the puck from the left side and Jurusik appeared to make the pad save. But the puck stopped right on the goal line and as Jurusik regained his feet a crashing Ferrantino dove at the loose puck and forced it into the back of the net.

“Mac [MacEachern] shot it and it was sitting there somewhere. I dove somewhere towards the net and knocked it in,” said Ferrantino. “I had no idea it was even in the net until the horn went off.”

Ferrantino’s desperation play tied the game up at three. Soon after, the Spartans had another two-on-one and nearly converted on it. The fans sitting behind the Badger net acted as if the puck had gone in as a crashing Joe Cox had knocked the net off and seemingly had scored. The officials waved off the goal and their ruling was upheld by video review.

As the period wound down, MSU would be handed their greatest challenge of the night. Junior JT Stenglein was called for boarding at the 17:09 mark of the second period and was assessed a five minute major. Despite a flurry of Wisconsin chances, the Spartans were able to kill off the major into the third period.

The third period went back and forth with both teams getting quality chances. For a time, it looked like the Spartans and Badgers would be heading to overtime. But Hoomaian scored on the breakaway, making a quick deke before shooting it five-hole, with under five minutes left. Michigan State was able to hold on in the final minutes and earned a hard fought 4-3 victory and their first conference win of the season.

Still, there are areas for Michigan State to improve on moving forward.

“We have to simplify our puck movement to get the puck moving out of our zone quicker and up to the neutral zone and into the offensive zone,” Anastos said.

The Spartans and Badgers will play again on Saturday at 2:38 p.m.