After a Tough Weekend, Spartans Look Ahead to No. 5 North Dakota 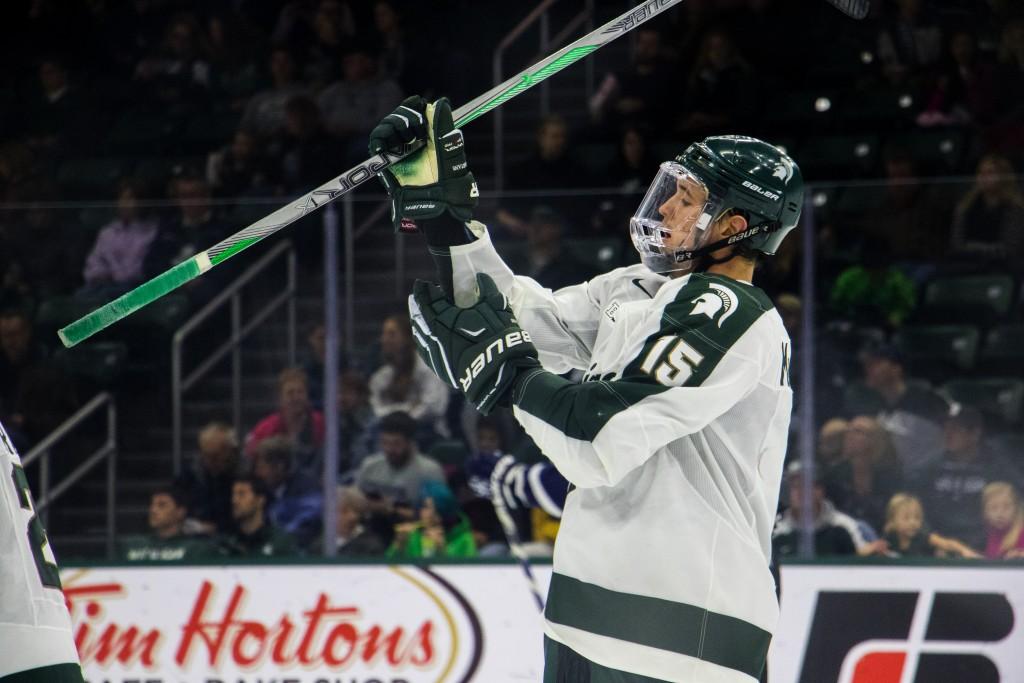 As if their non-conference schedule hasn’t been tough enough, Michigan State will welcome another top-20 team into Munn Arena this weekend as they play host to No. 5 North Dakota. The newly named “Fighting Hawks” will present a whole new set of challenges for MSU.

The Spartans understand the task at hand.

“It’s a big weekend, just because it’s a really big challenge for us,” said junior forward Joe Cox. “We set out to play the best teams in the world, that’s one of the reasons why people come to Michigan State. So it’s a huge weekend for us and hopefully we can keep up the production that we’ve had.”

The Spartans will certainly need to keep up that point production this weekend as they face a team that has only allowed an average of 2.21 goals per game so far this season. UND goaltender Matt Hrynkiw has a 2.11 goals against average and a .911 save percentage in the last 11 games he has played.

The Michigan State offense has been at a premium 11 games into the season, scoring 24 goals in the five games they have played in November. The have scored at least four goals or more those those five games this weekend which is something they last did in a stretch of games from Dec. 2009 – Jan. 2010.

“We have more depth up front,” said senior captain Michael Ferrantino of the Spartans potent offense. “I think that all four lines can contribute, I think that we’re getting more pucks to the net and I think that we’re playing a much more simple game. We’re having no issue chipping pucks in, going and getting them, and out working the other team. We’re not forcing things”

Not only does North Dakota not allow very many goals, they also score a lot of goals. They currently rank 12th in the nation in team offense, averaging 3.43 goals per game.

In order to have a chance this weekend against a very tough opponent, the Spartans will need to tighten up defensively against a very deep North Dakota offense. Sophomore Nick Schmaltz leads the Fighting Hawks with 17 points (2g,15a) and Drake Caggiula (7g,9a) and Brock Boeser (7g,7a) lead the team in goals scored. The UND offense has outscored their opponents 48-31 this season.

“We’re gonna have to take a total team effort, team defensive effort,” said coach Tom Anastos. “Not just our defense, not just our goaltender. We’ve got to have a team commitment to defense when we don’t have the puck to try to get the puck back. They [North Dakota] are a good possession based team and they’re dynamic offensively.”

Last weekend against Michigan Tech, the Spartans gave up late goals in both games that forced overtime and resulted in disappointment. On Saturday the game-tying goal came with 1:40 left, on Sunday it was with 51 seconds left. Despite these results, the mindset remains one of bouncing back for Michigan State.

“I think we’re ready to get back on top of it,” said Cox. “We had a nice off-day yesterday so I think guys are refocused and ready to get back after it. You hate to blow those late leads, but it’s something you have to learn from.”